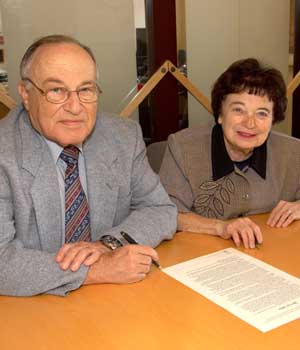 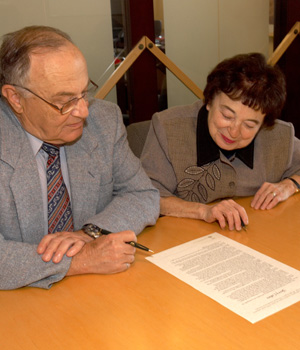 Mark and Zita Bernstein are committed supporters of the Winnipeg Jewish community and the growth and security of Israel. As well as supporting community institutions and charities, they are supporters of the arts and education. They support three scholarships, one at the University of Manitoba in the Faculty of Music, one at Queen's University in Engineering Chemistry, and one at the Technion in Israel to help first year disadvantaged students. These scholarships represent Zita's great interest in lieder, Mark's field of scientific training, and their admiration for the great institution of the Technion. In addition, they contributed a Steinway concert Grand Piano to the Asper Campus to encourage the performance of high quality music in the Berney Theatre.

Mark's parents, Sara (Churchill) and Maurice Bernstein, were immigrants from Russia, arriving respectively around 1900 and 1913. They were married in Winnipeg in 1923. Zita's parents, Carl and Mariam (Musie Eisner), arrived in Canada from Austria/Poland in1926 with their daughter Lucy. They settled in a Saskatchewan hamlet named (ironically) Mozart, where Zita was born. The family later moved to Melville and then to Winnipeg. Mark's father spent most of his career as a salesman in various fields, ultimately becoming a partner in Phillips Paint with his brother-in-law, Phil Sheps. Zita's father was a manufacturer's agent whose territory was Saskatchewan.

Mark's home environment was very Zionist oriented. His grandmother, Tema Churchill, was one of the founders of Na'amat in western Canada. His mother was very active in Hadassah and Mogen David Adom, and held executive positions in both. His father, Maurice, was active in the Sharon Zionist club where he served a term as president. His grandmother was a longtime active Zionist and went to Palestine for two years around 1930, where she worked for the establishment of kibbutzim with her friend Golda Meir.

Mark and his younger sister Babs (Asper) were initially raised in north Winnipeg where Mark attended Folk Shul, Champlain and Machray schools. When they moved to River Heights he continued at R.H. Smith and Kelvin High School. From there he spent two years at the University of Manitoba and then went to Queen's University to study Engineering Chemistry for three years. After graduating in 1948 he worked for two years in the paint field in Minneapolis, spent a year in Europe, married Zita in 1952, and then spent another two years working in the paint field in Toronto. He returned to Winnipeg in 1954 to take the position of Technical Director at Phillips Paint Products. He eventually bought the company from his father and uncle in 1968 and developed it into a successful supplier of industrial coatings on the prairies. During his career he was active in the Canadian Paint and Coatings Association, serving on the board and then on the executive committee for eighteen years, ultimately as chairman. This position gave him the opportunity to travel widely, meet a variety of people and participate in international committees dealing with environmental and legislative affairs.

Zita's family moved to Winnipeg when she was 10 years old. She attended Champlain, Machray, and St. John's Tech schools while simultaneously studying piano. She began her university studies for a Bachelor of Arts degree while continuing her private studies in music, including the required subjects for a music degree: harmony, counterpoint, form, and history of music. She received her music degree in 1947 (Associateship in Music at Manitoba A.M.M., now called Bachelor of Music), and her Bachelor of Arts degree the following year. After her marriage and her move to Toronto, she attended the University of Toronto for her Bachelor of Library Science degree in 1954. On their return to Winnipeg, Zita worked for many years at the University of Manitoba library on a part-time basis.

Zita and Mark have three daughters, Sandra, Tamara and Mariam, who all attended public school in River Heights. Sandra lives in Toronto where she earned her law degree and now specializes in facilitating law seminars. Tamara also lives in Toronto where she is a music critic and concert producer. Mariam is a Winnipeg based actress, director and theatre teacher. She and her husband Darrell Baran have two daughters, Miranda and Hannah, to whom Mark refers as our "great joy"

Mark and Zita are agreed that retirement is great. Favorite activities are spending time with their granddaughters, Miranda and Hannah, traveling, attending concerts and plays, and just staying home, either in Winnipeg or the cottage.

Zita and Mark are proud of the Winnipeg Jewish community and especially of the Asper Jewish Community Campus. They appreciate that the campus is essential to the continued vitality, unity and longevity of the community, to which it has contributed so much. They regret that so many young people leave the city. In their experience, the quality of life in Winnipeg is very high and the city is a great place in which to live and raise a family. They are pleased to expand their long-time support of the city and community through their participation in the Jewish Foundation's Endowment Book of Life.