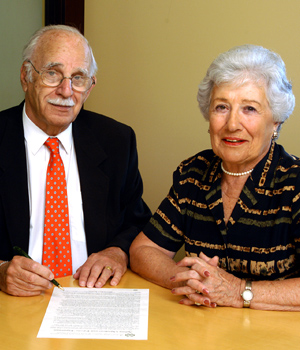 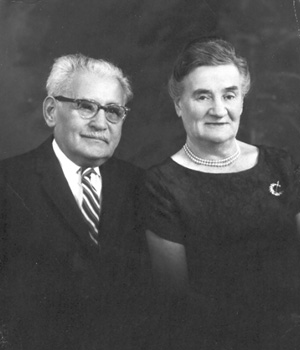 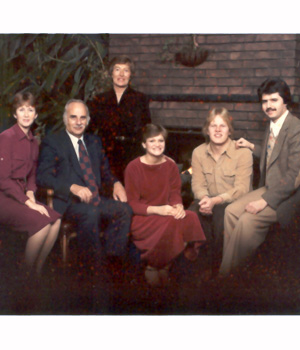 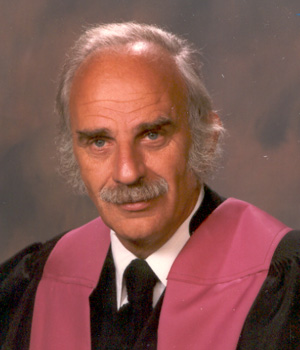 There was a time when they were children that both Ed and Zel (Mindess) lived on College Avenue in the famous north end of Winnipeg. They did not know each other then, but since meeting and marrying in 1949, they have so far spent 55 happy years together.

Zel's father, Jacob, emigrated from Russia just as the First World War broke out He had to wait eight years until he could send for his wife Feiga (Fanny) and their two children, Ben and Anne, to join him in Winnipeg. Both Zel and her brother, Ralph, were born here.

Jacob was a hard-working man, a "jack-of-all-trades" who supported his family by building fixtures for drugstores and restaurants, plus furniture and many other articles. He was very supportive of his wife Fanny's volunteer activities. She was deeply involved in Jewish community affairs and in anything to do with raising money for the State of Israel. Named a "Woman of Valour" for her work, she and Jacob visited Israel, where they were recognized for their invaluable contribution to the growing state by then Prime Minister Ben Gurion - and had lunch with him!

Zel attended Machray, Champlain, and St. John's High schools in the north end and went on to the University of Manitoba, where she obtained her Bachelor of Science in Home Economics, majoring in organic chemistry. Always very athletic, Zel played numerous sports, including tennis and golf, and won the prestigious Tribune Trophy in golf in a province-wide competition.

After graduation, Zel taught clothing construction and design. After marriage, she pursued volunteer activities for the United Way, ORT, Pioneer Women, and the Sharon Home, all the while fully occupied with raising her and Ed's four children: Linda, Neil, Bruce and Jodi.

Like Zel, Ed is also a product of the glorious north end of Winnipeg, although he was actually born in a small community known as Fairlight in Saskatchewan. His birth took place in the back room of his parents' grocery store. His Polish born father, Hyman, was an orthodox man who immigrated to Canada in 1908. His Russian born mother, Rebecca (Baru), was a quiet and gentle woman, who worked for the Royal Bank as a teller prior to her marriage. In addition to "life" itself, Ed credits his parents for teaching by example. From his father, Ed recognized the value of a work ethic, while his mother taught him the value of community involvement. From both he realized the importance of a good education.

The family moved to Winnipeg so that their three children — Nina, Harvey, and Ed — could get a Jewish education. In Winnipeg, soon after their arrival, Nina passed away from a childhood illness at the age of 13.

As war broke out during his second year of university, Ed joined the RCAF and pursued his fascination and love of flying. He graduated as a transport pilot, and remained in that capacity until the war's end. Following the war, Ed returned to university, graduating with a B.Sc. Degree, majoring in botany and zoology. Looking for a more stable profession, Ed turned to law, graduating in 1950. For more than 25 years, he enjoyed a flourishing multi-faceted private practice, specializing in family and criminal law. He gave up this practice in 1978 when he was named to the Provincial Bench, an appointment that he worked hard to honour, resulting in his appointment as Associate Chief Judge of the Provincial Court.

As a judge, Ed traveled extensively throughout the province and in fact, visited and presided in almost every reserve in Manitoba. He became an expert on aboriginal issues and was featured on Front Page Challenge on CBC and was interviewed by Morley Saper on 60 Minutes for American television. He was sought after as a guest speaker for numerous organizations, and was featured in numerous documentaries on ethnic adoptions.

Throughout his busy career, Ed remained involved in the local Jewish community, serving as President of Jewish Child and Family Service, and a board member of Camp Massad, The Sharon Home, Rosh Pina Synagogue, and Temple Shalom, among other activities. As well, he was deeply involved in his home community of West Kildonan. He was active in the baseball programs for children from ages six to sixteen, worked with the hockey programs, and established and promoted programs for the elderly, such as bingo and movies.

After raising a family of four children, Zel and Ed feel very fortunate that three of their children still call Manitoba home. Together they hope that their children and eight grandchildren will always value the importance of community and most importantly, the need to maintain Jewish values and close family ties.