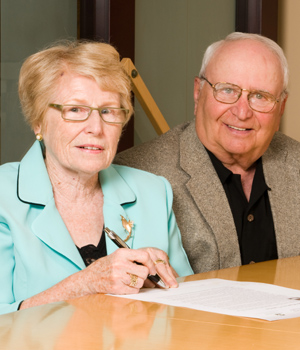 Yvonne and Harvey Cantin sign the Endowment Book of Life 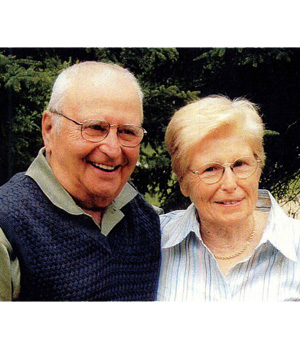 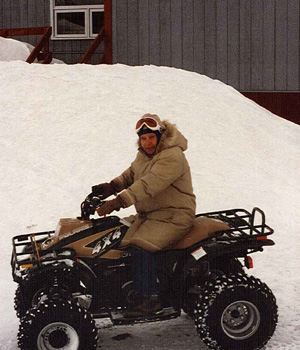 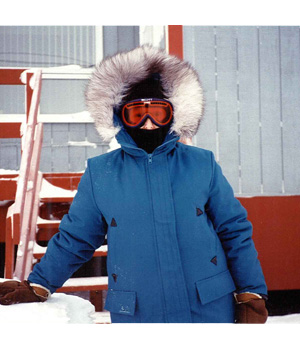 Yvonne and Harvey Cantin have three beautiful grandchildren. This story is recorded with the hope that the three of them, and generations following, will, like Yvonne and Harvey, find joy in family and in community.

Mary Berg, Harvey's mother, was born in Troskunai, Lithuania. An older sister, Rishke (Max Meyerowitz) came to Manitoba first and later brought Mary and three other sisters here as young women. They settled first in Cooks Creek and later in Selkirk. Joe Cantin, Harvey's father, was also an immigrant and was a plumber. They met and married in Winnipeg, but were living in Windsor, Ontario when the birth of their second baby was imminent. They crossed the border to a larger hospital in Detroit, Michigan when it appeared that it would be a complicated birth. Harvey Cantin was born there on June 16, 1930. The family moved back to Selkirk and Joe abandoned the family shortly afterward.

Mary opened a small store to make a living to support her two sons — Harvey and his older brother Oscar. Because Mary worked long hours, the boys were sent to live in the Jewish Orphanage in Winnipeg. This was a sobering experience and the brothers were relieved to be returned to their mother's care.

Harvey attended Northward, Central School and Selkirk Collegiate. Much of his life centered around work, as in those days children helped out in the family business. He also loved sports, and played hockey for the Selkirk Fishermen, and commuted to Winnipeg to play football for the St. Johns Grads. Other activities included the Wolf Cubs, and a local theatre group. He also joined the Royal Canadian Army Cadet Corps during the war and achieved the rank of Regimental Sargeant Major. He was offered a scholarship with the army but this would have required him to move to Kingston, Ontario and his help was needed at home with the family business.

After high school, Harvey apprenticed as a pharmacist at Hollenberg Clinic in Winnipeg. He graduated as a pharmacist in 1956. On a New Year's Eve blind date in 1953, he met Yvonne Smith. They married on June 26, 1958 in the Shaarey Zedek Synagogue.

Yvonne was born in Kenora, Ontario on June 15, 1934 but was raised in Winnipeg's Weston neighbourhood. She attended Cecil Rhodes School, Daniel MacIntyre, and Kelvin High School. After working at a bank for a year, she began training at Health Sciences Centre General Hospital and graduated as an X-ray technician in 1955. Yvonne took classes with Rabbi Berkal and converted to Judaism prior to her marriage to Harvey.

The Cantins had four children: Jeffrey, Paul, Blair and Darcy. Sadly, Blair passed away accidentally at the age of ten months. The Cantins are proud of their children and their three grandchildren.

For 29 years, the Cantins owned and operated Cantin Drugs Ltd. in Charleswood. Once Darcy was in school, Yvonne joined Harvey at the store, undertaking many of the administrative duties. Along with all of the activities involved with raising their family, each pursued their own interests. Yvonne was involved with the Shaarey Zedek Sisterhood and is a lifetime member of Hadassah. She is a past president of the White Cross Guild of the Health Sciences Centre in Winnipeg and presently a member of the hospital auxiliary of the Gimli and District Hospital. Harvey served as President of the Manitoba Society of Pharmacists, a Board Member of the Canadian Pharmaceutical Association and Vice President of the Association of Canadian Community Pharmacists. For many years he served as a Director of the Winnipeg Blue Bombers. Harvey recalls wonderful times at the Maple Leaf Curling Club, including winning the B'nai Brith Bonspiel! He was also the recipient of the Pat Gorman Trophy in his fourth year of Pharmacy for sports combined with scholarship, and Pharmacist of the Year award for service to his profession.

After they closed the store in 1991, Harvey worked with Pharmacare for two years and played a key role in setting up pharmacies with the on-line prescription system. The Cantins then set off on an adventure. For four years they lived in Rankin Inlet, Nunavut where they opened a pharmacy that served eight northern nursing stations. Although living in a small isolated community took considerable adjustment, they have many fond memories and friendships that still remain. E-mail helped them stay in touch with the "outside world" and their e-mail address still makes them smile — hcantin@polarbearheaven.com!

When they left Rankin Inlet in 1998, they decided to move to Gimli where they could enjoy a relaxed lifestyle. Today Harvey works part-time in the local pharmacy and enjoys golfing, photography and his computer. Yvonne takes care of her beautiful yard and is active in a book club, a garden club and the hospital auxiliary. They spend winters in Texas.

Wherever life has taken them, the Cantins have experienced the joy of community life, the strength of long-term friendships, and the warmth of family relationships. Their commitment to the Jewish Foundation of Manitoba is an expression of gratitude for these blessings.