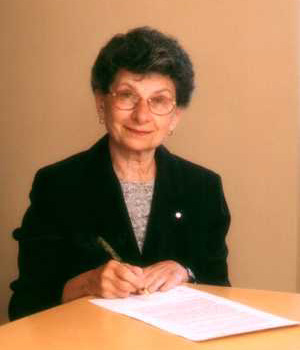 I was born in Winnipeg in 1929, to Sam and Mina (Shaen) Granovsky. I have an older sister, Natalie. In 1907-08, my father had emigrated from Russia together with his mother, Rebecca (Torgovetsky), step-father Samuel Ostry, and eight siblings (see Granovsky-Ostry story). Around the same time, my mother and her eight siblings, together with their parents, Isaac and Sophie Shaen, came from Rumniksigrad, Rumania to Winnipeg.

Shortly after my birth, my family moved to Pine Falls where my father operated a country store as part of the family business, Western Dry Goods Importing Company. Since everything in the town was owned by the Abitibi Paper Company, I could not attend school and so had a private tutor for my first years of schooling. In 1938 we moved back to Winnipeg and I attended Grosvenor Elementary School, Robert H. Smith Junior High and Kelvin High School. In 1950, I earned a Bachelor of Arts in Psychology from the University of Manitoba and have since taken courses in Administration, Social Policy and Evaluation Systems.

I was married from 1952 to 1967, and had three children. Joshua, born in 1953, has a Ph.D. in Counselor Education. He is an Associate Professor at the University of South Carolina. Susan, born in 1957, is a Geriatrician in Montreal. She is married to Pat Ergina, a Cardiac surgeon. They have three children, Malaea Rose, Sophia Lei, and Samuel Lee. Peter, born in 1959, is an Accounting Clerk for the City of Winnipeg.

In my professional life, I have served as the Executive Director of various organizations including the Volunteer Centre of Winnipeg (1967-1970), Klinic (1971-1972), and Age and Opportunity Centre, Inc. (1972-1981). In 1982, I incorporated as Yhetta Gold, Inc. and since then have undertaken research and studies on behalf of such groups as the Canadian Seniors' Network, the Manitoba Coalition of Service Providers, ARCOR Corporation, Metropolitan Kiwanis Courts, Travel Israel Committee, and the Auditor General of Canada. My current work is with F.G. Consortium on "Actualizing Universal Design", a project committed to developing a guide to incorporate universal design principles for the analysis and removal of all barriers to social equity and equality.

Like my mother before me, I have been an active community volunteer. I have served as President of the Multiple Sclerosis Society of Canada (Man.), Gas Station Theatre, National Advisory Council on Aging, Astra Non-Profit Housing Corporation, and Creative Retirement Winnipeg. I am currently serving as Vice President of The Jewish Foundation of Manitoba.

I received: the NCJW Woman of the Year Award (1985), the Distinguished Service Award from the University of Manitoba (1991), the Canadian 125th Anniversary Medal (1992). In 1996, I was honored to be appointed a Member of the Order of Canada. In 1999, I was pleased to work on the Canadian Co-ordinating Committee for the International Year of Older Persons.