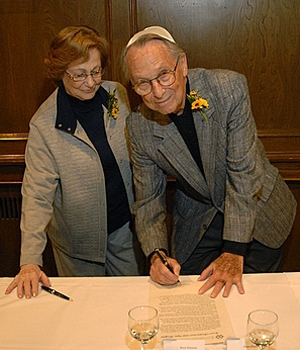 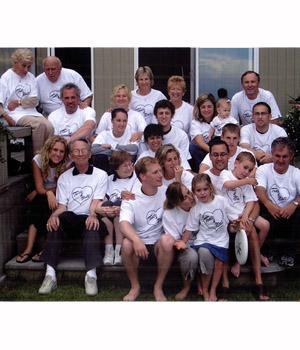 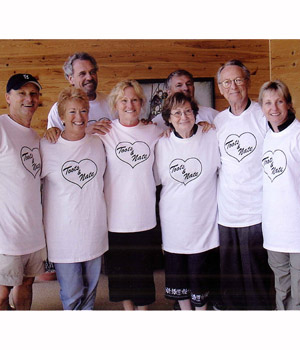 Toots and Nate with their children

Nathan (Nate) Fingold grew up in Winnipeg's north end. His father Harry, an immigrant from the Kiev area in Russia, was a merchant who established a variety of businesses in Saskatchewan (McNutt and Saskatoon), as well as in Manitoba (Winnipeg, Selkirk and Grand Beach). Nate's mother, Sophie (Solodky), also was from Kiev, but they were married in Winnipeg. Nate was the youngest of three children. Goldie was the oldest, and she later was married to Ike Shulman of Winnipeg. Micky, married to Margaret, achieved considerable success as a commercial designer with projects throughout Canada. Both Goldie and Micky are now deceased.

Toots (Gertrude Finkleman) was born in Prince Albert, Saskatchewan, the youngest of seven children of Sam and Sarah (Rifkin) Finkleman. Her siblings were Dorothy (Feldman), Hymie, Harry, Diane (Avery), Jerry and Manny. The family moved from Prince Albert to Selkirk, Manitoba, and finally to Winnipeg's north end in 1931, where Sam established the food manufacturing business now known as Elman's Food Products, which has become an institution in Winnipeg famous for its horseradish, pickles, herring and other fine products.

Toots and Nate met in 1942 and were married in 1944. Nate was still in the Air Force and Toots worked for an insurance firm and then for a ladies clothing wholesale. They lived in a studio apartment when their first child Martin was born in 1947. Nate had retired from the Air Force and was articled to the firm of Sandell Peltz & Company, Chartered Accountants. This involved a five year course at the University of Manitoba while working at the firm. During this time their second child Karen was born in 1950 (the Winnipeg flood year).

Nate graduated as a chartered accountant in 1953. By then the family was living in their first home on Semple Avenue, where their daughter Arlene was born in 1955. Nate had joined the firm of Schachter Levenstein & Fingold as a partner and then practiced in a succession of merged accounting firms as a partner until he retired in 1987. The family moved to their second home on Elm Street in 1960 and lived there until 2002.

Toots and Nate enjoyed bowling and golfing when they were younger, and Toots became a duplicate bridge master in 1979. Their son Martin (married to Linda Butovsky) was a partner in the legal firm Buchwald Asper Henteleff and is now one of the founding partners of Winpark Dorchester Properties. Karen started out as a teacher and was a long time owner and operator of an Art and Gift boutique in Vancouver, B.C. She is married to Gary Simkin and lives in Vancouver. Arlene, a Dental Hygienist, is married to Dr. Michael Charach and lives in Richmond, B.C. Toots and Nate have seven grandchildren and five great grandchildren.