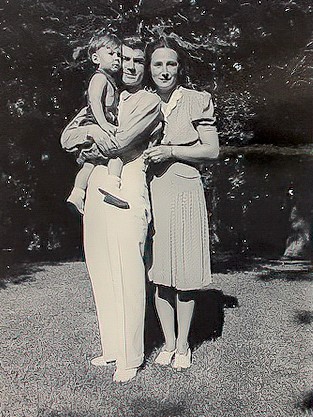 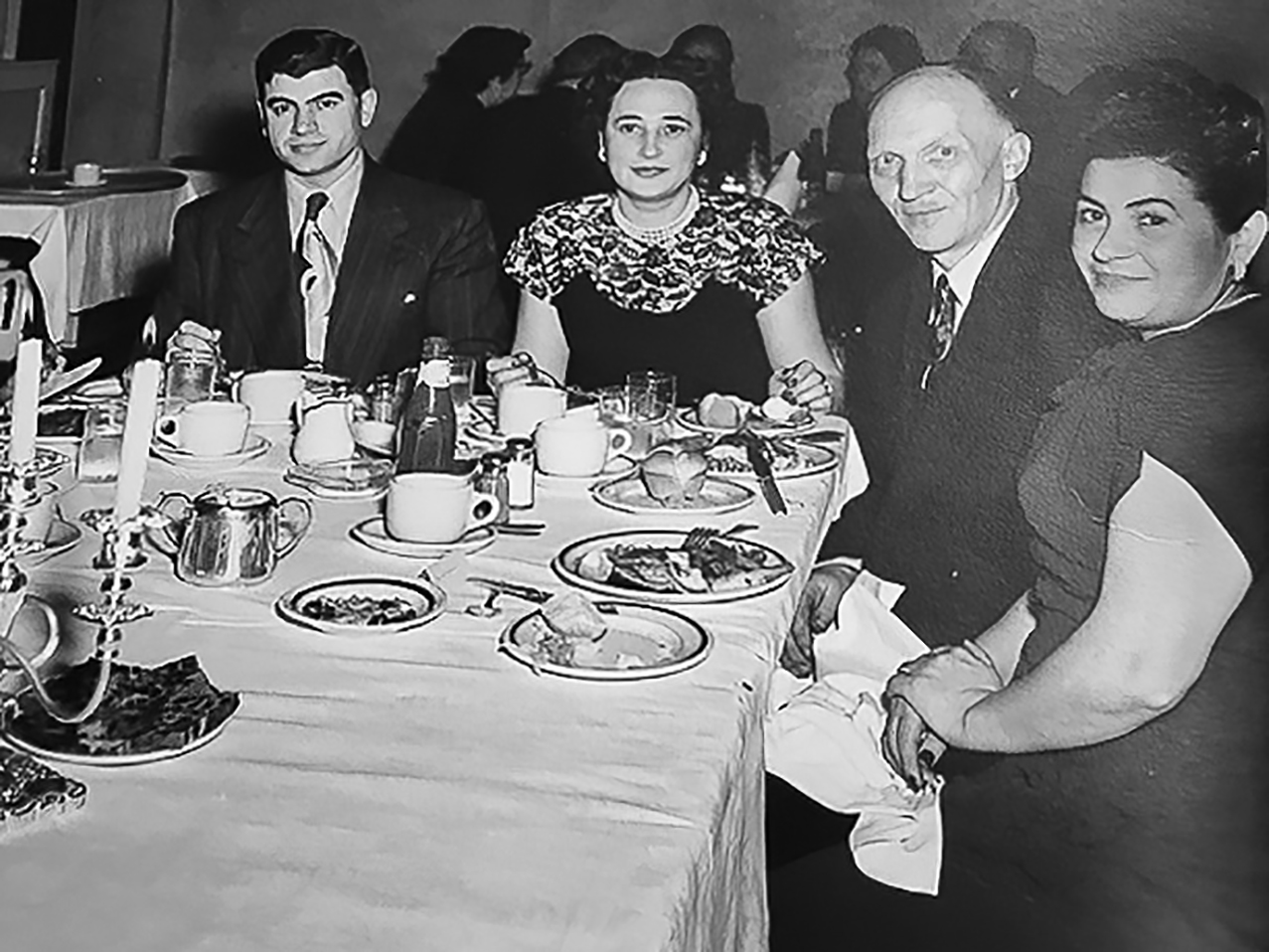 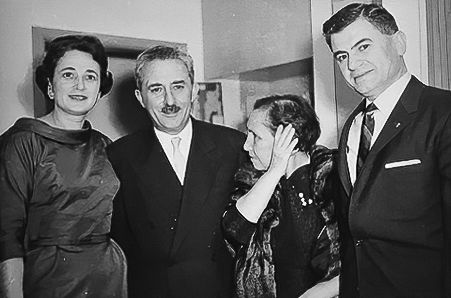 Mom and Dad with His Excellency Moshe Sharett and wife, Tzipora, at our home, November 1958 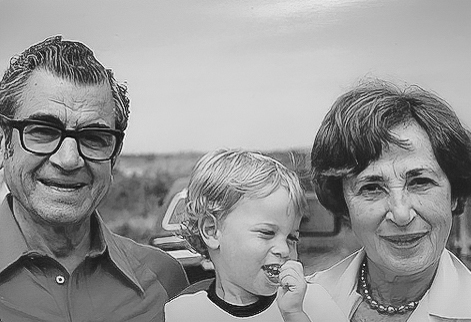 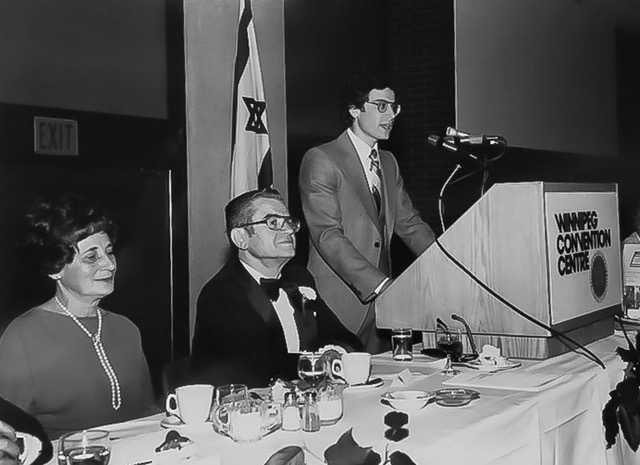 Negev dinner 1979,  honouring our father;  brother David conveying the family appreciation and admiration to both parents

Both my parents were born in the Ukraine in 1910 and arrived in Winnipeg as children. My mother, Pearl, (father, Abraham Litvack, mother Devorah Fridell) arrived with her parents and two brothers, from Odessa at age two. My father’s (Sydney) eventual settlement in Winnipeg followed a harsher route. His older half siblings (Ida, Fannie and Morris) had emigrated to Winnipeg by 1911 from Katerburg, prepared to bring over their mother, Toba Melamed, her second husband, Leib Miller, my father and his older sister, Vera (Weiner). The First World War and then the Polish-Russian War inflicted upon them years of panic and penury, made more horrific by a pogrom in which their father and mother were beaten and the family driven apart for several weeks. The children having been ordered by their mother to flee into the forest were sustained by the kindness of several local women who provided them with potatoes (even then respecting kashruth). By chance, only two weeks later did one of the women come upon their parents in the town of Shumsk and so reunited the family. It was months before their mother, Toba, regained her voice, the shock of the traumatic events having stilled it. My twice widowed baba moved the children to the village of Dederkaly where she eked out a living as a peddler, carrying grain in one direction to the larger town of Shumsk, flour on the return. At last, in 1921 with some degree of peace, a Polish farmer was hired to take them stealthily by wagon, into Poland, then to Warsaw where they discovered the company, booked to carry them across the ocean, was bankrupt. It took six months for the older siblings to retain another agent.

Taken first to Yorkton, Sask. the two young children attended school for the first time and worked in their older sister’s (Ida Croll) general store. At the urging and support of his brother Morris, my father moved to Winnipeg to finish high school. It is there that his story started to blend in with those of other Winnipeg immigrants: education and hard work. As for my mother’s family (parents, two brothers, Joe and Norman, and two half siblings who had preceded them, Misha Ludwig and Bessie Spears), they settled in Winnipeg on Alfred Avenue. My mother’s father who had been a blacksmith in the old country, found work as a street cleaner and her mother took in boarders in their little house.

Both my parents graduated from high school, trained as bookkeepers; we assume that is how they met.  A five-year courtship enabled them to save enough money to hold their wedding at the Hebrew Sick Benefit Hall on June 21, 1936, then to acquire household goods and rent an apartment on Salter St. For my father, bookkeeping lead to the opportunity to purchase Miller’s Hatchery on Main Street, an enterprise that he expanded to four locations on the Prairies. Ironically, his father’s surname was Miller but once my father started in bookkeeping with his brother Morris he changed his name to Morantz, the family that had long provided for him. By 1956, he took the bold step of selling the business he nurtured for almost two decades and threw himself into nurturing fledgling Jewish institutions, supporting our family as a real estate investor. His dedication and passion for ensuring the well-being of the local Jewish community and the advancement of the new State of Israel is evident in his philanthropy, the millions he helped raise and the many organizations in which he was instrumental as either an officer or chair or president, such as: Israel Bonds, Hebrew University, Canada-Israel Securities, the Zionist Organization of Canada, Jewish Welfare Fund,  JNF, UJA, Jewish Foundation of Manitoba, the Winnipeg Jewish Community Council, Maimonides College, Joseph Wolinsky Collegiate, Ramah Hebrew School and Rosh Pina Synagogue. On the day of his funeral, a bitterly cold February 23, 1981, all the students of Joseph Wolinsky Collegiate stood outside, in silence, as his cortege passed by.

There were no ghosts of the past in our house. My father never spoke of his early years, only to allow it to motivate him in his exceptionally busy volunteer positions. Our mother, his silent partner, made it possible by devoting herself lovingly to raising their children and maintaining a warm and inviting home, as he was out attending meetings after dinner almost every night of the week The stigma, attached to married women working outside the home that prevailed in the 1930s and much beyond, influenced my mother’s decision to leave her gratifying bookkeeping job even though she was a whiz with figures. Nevertheless, come Erev Shabbat the delicious aromas of freshly baked cinnamon buns for a pre-Shul breakfast, competed with those of the bubbling chicken soup. The synagogue we all attended was the Beth Jacob until our family moved to West Kildonan and the newly reorganized Rosh Pina in the north end became the site of our celebrations and observances, while our father religiously attended Shabbat services until his death. Family was all important to us, within our home and the much wider circle of aunts, uncles and cousins with enough religious festivals, bar-mitzvot and weddings to joyfully bring us together often. Friends too played an important part, especially in the summer when families would meet in exotic places such as Lockport or Selkirk for picnics and rounds of baseball. As busy as he was, our father made time for marathon family car trips to California to visit relatives or as close as the bordering states to attend hatchery conventions with explorations of the region always on the itinerary. The values of giving and responsibility for others were instilled in us in the air we breathed as was education, resulting in us three children enjoying interesting fulfilling careers: Aubrey, a diplomat, Toby, an anthropologist and David, a biologist.

This legacy continues to influence the lives of their six grandchildren.