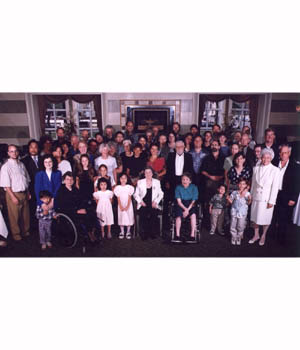 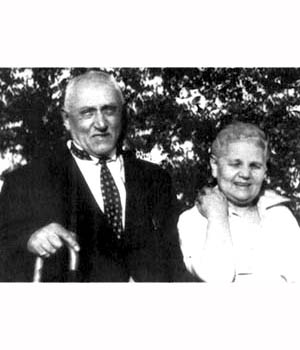 In 1907-08, the three eldest Granovsky boys, including my father Samuel, came to Winnipeg. The Jewish Immigrant Aid Society later assisted with the immigration of my grandparents, the other six children, and a servant, Stefan. The family settled in Winnipeg's north end and in 1911 my grandfather, a merchant, started Western Dry Goods Importing Company at 90 Albert Street. The company ran country stores, servicing Manitoba's rural towns.

Of the nine Granovsky-Ostry children, seven attended University: Teva (Irene Axler) took his dentistry training, and later opened a practice, in Toronto, Munia (Mary Warshoff) worked as a merchant to support his primary interests in history and philosophy, Sophie (Albert Parlin) was a Medical Doctor who practiced in Chicago since, in 1917 when she graduated, there was no opportunities for female medical doctors in Canada, Anne (Max Bregman) was a housewife living in Chicago, Ethel was a social worker who, among other pursuits, ran the Winnipeg Jewish Orphanage, was involved in the delivery of family services, and for some time worked for UNESCO, assisting with the immigration of post-Holocaust orphans, Harry (Jessie) was a Medical Doctor, whose practice took him to such places as China, the outback of Australia, and on ships in the North Atlantic, Elizabeth (George Fisher) was a teacher who lived in Egypt, Chicago and later, Florida, Edward (Joan Bourne) was an Obstetrician/Gynecologist practicing in England nd Canada.

My father Samuel worked in the family business as a merchant and fur trader. He married my mother, Mina Shaen, in 1925. They had two daughters - Natalie was born in 1927 and I was born in 1929. The year I was born, my parents bought a home at 377 Oxford Street, which remained the family home for 40 years. During the depression years, my immediate family moved to Pine Falls to run the country stores there, returning to the family home in 1938. Back in Winnipeg, my parents became active in the Jewish community and the Winnipeg community as a whole. My father and mother provided a stable, loving home for their family.

My grandmother passed away in 1964 at the age of 98. Her descendants now number in the eighties and live in many parts of the world, but they had their start in Winnipeg. She would be proud of her family.