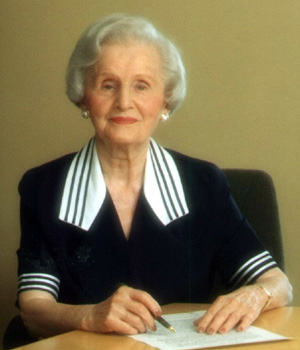 I was born in Koretz, Russia in 1913. I came from a large family, very religious. We were nine children - seven girls and two boys. My family owned a dry goods store and my mother and my two elder sisters worked together at the store. It was a very good business, we were not poor. The five little girls, including me, attended school, where we were taught Russian, Polish and Ukrainian and for our Jewish education we had a teacher coming to the house. We were very happy and a real good family.

Unfortunately, our happiness did not last very long, the atmosphere changed. Almost twice a week a band of criminals arrived in the middle of the night and banged on the doors while we were asleep. They came in and took whatever they wanted. They made my father take off his night clothes to make sure that there was not any money hidden and got very angry, calling him a "dirty Jew", when they did not find any. Some of our Ukrainian neighbours put masks on - we should not recognize them - and did the same thing. Finally the family decided that something had to be done, so they wrote a letter to my mother's brother, who lived in Canada, for help. It took a little time and he agreed that one of the girls should come to Canada. My sister Esther, who was two years older than I, was the first one to leave.

Two years later, in 1929, I came to Canada. My younger sister Cipora was a Zionist and she went to Israel. I was very lucky that I came to Canada and was very happy to be with my relatives here.

I was fluent in Polish, Ukrainian and Russian, and my cousin Dorothy knew of a place where my language skills were needed. She approached the manager and told him that her cousin, meaning me, would be arriving in a week's time, he agreed to wait to see me. After being in Canada six days, I went with my cousin Dorothy to that place, and he hired me immediately. I was very happy, I was the interpreter and worked there two years until the business was closed. It did not take me very long and I found a job at Wall-Matoft-Stone and worked there also for two years. Then I decided it is enough.

I was dating a nice fellow by the name of Harry Silverberg, and we decided to get married. We moved to St. Boniface and bought a small grocery store. We both worked there, it took a little time and we were doing very well. I gave birth to a little girl, Nora (Kaufman) and we bought another store, and business was getting better every day. A few years later I gave birth to my second daughter, Evelyn (Rady).

My husband was the type of a person that whatever he touched turned into gold. We moved to 177 Machray Avenue, after being there for three years we decided to sell and bought a home on 18 Cathedral Avenue. Life was very good. We had many friends and were active in the community — Rosh Pina Synagogue, the Y.M.H.A., State of Israel Bonds, and the Jewish National Fund, to name a few. The creation of the State of Israel was an exciting time. We were happy to be able to give financially to the community, city and country that were so good to us.

Harry passed away in 1966 and a year later I moved to Halter-East where I still live. I have seven grandchildren and six great-grandchildren. From the day I came to Canada I have had a wonderful life, and my hope for the future is that people will appreciate the opportunities and the privileges that are theirs, and will give back to their community, as they are able.