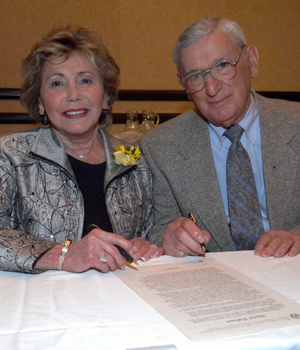 When Sylvia Scott says she organized a party called "Swing 'N Sway with Sisterhood" for the Shaarey Zedek Synagogue, you know that this is a lady who has a twinkle in her eye and likes a fun time! Her husband Saul evidently loved that about her, since he was a confirmed bachelor before marrying her and welcoming (and adopting) her three children at the age of 45.

Sylvia's father, Ben Kettner, came from Austria to Winnipeg in 1923 to join his older brother. Two years later he brought his fiancée, Cora Rich, to Canada and later also Cora's mother and two brothers. Ben and Cora married and after Ben worked for a time for the CNR, the family, which now included sons Paul and David, moved to Grahamdale, Manitoba where Ben operated a grocery store. Sylvia was born in 1937 in Winnipeg. In 1939, the family moved back to Winnipeg where, together with one of Cora's brothers, Ben established Winnipeg Pants & Sportswear (now operating as Richlu Manufacturing).

Saul was born in Perth Amboy, New Jersey in 1924. His parents had come to the United States as young people — his father from Minsk, Russia, and his mother from Kovno, Lithuania. They were married in 1916, and had three children: Felix, Frances and Saul. After high school, Saul spent three years in the U.S. Army. Soon after his discharge he enrolled in the New Jersey Institute of Technology in Newark, New Jersey. He graduated with a Bachelor of Science in electrical engineering. In 1949 he began work for a consulting firm. He was sent to Morgantown, West Virginia to work on a project at the Morgan Shirt Company. He left the consulting firm and stayed on with Morgan Shirt. In 1956, he came to Winnipeg from West Virginia to work with Monarch Wear.

From 1966 to 1967 Saul worked as an independent consultant and then in 1968 he established Wescott Fashions. It was the beginning of a new era in jeans when ladies started to demand "jeans that fit." In addition to ladies' jeans, Wescott also produced ladies' sportswear and men's leisure wear. By the early 1980's, Wescott had 800+ employees with two factories in Winnipeg and one in Saskatoon.

By now Saul had met Sylvia through mutual friends, and they were married on December 11, 1969. Their daughter Nancy was born in 1971 and son Bryan in 1974. All five children are University graduates and are pursuing their professional careers. Sylvia and Saul have three grandchildren: Jessica Blanchard, Ben Blanchard and Jami Mackenzie.

Both Saul and Sylvia have spent time as community volunteers. Sylvia was most active with the Shaarey Zedek Synagogue and did everything from editing the bulletins to working in the office and chairing a variety of functions for Sisterhood and the Synagogue. Saul served as the Co-Chair of the 1988 UJA Appeal and was also active with the Garment Manufacturers Association of Manitoba, including a term as President. They have made life-long friends in Winnipeg's Jewish community and wish the community stability and continued growth.

Saul retired in 1989. The Scotts had been holidaying in the Palm Springs area since the early 1970's and in January 1997 they bought a home in Rancho Mirage, California and became U.S. residents. While they spend eight months of the year there, Winnipeg has "permanent residence" in their hearts and it is for this reason that they are leaving a legacy through the Endowment Book of Life.