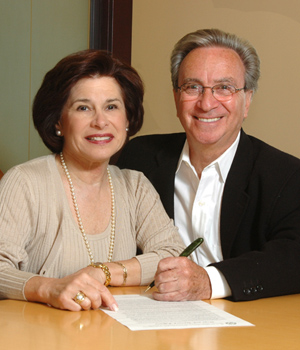 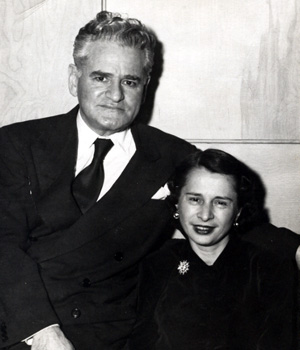 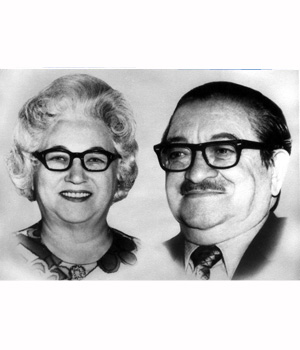 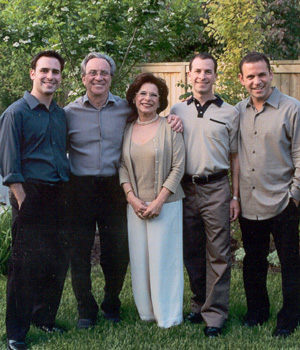 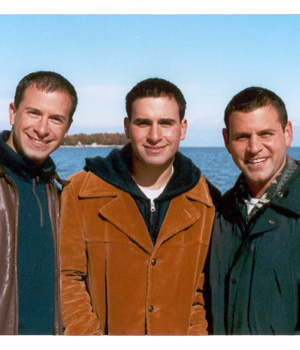 We could only have found each other the way we did in a city like Winnipeg. Back in June 1961, I was crossing a downtown street with my mother when Earl happened to drive by in his convertible. I smiled at him and he was so smitten that he spent the next two months trying to find me. We finally met at a university dance, began dating in September, were engaged by February and married in June, 1962.

We have many things in common. Both of us were born in Winnipeg, lived in the north end before moving south in our preteen years, were actively involved in Jewish youth organizations, such as BBYO and YMHA, attended Shaarey Zedek night school and programs and spent our summers in Gimli and Grand Beach.

I am the younger son of Morris and Bertha (Goldin) Golden. My brother, Morley, is eight and a half years older than I. Both my parents emigrated from Russia as children. My father, Morris, was a public accountant and owned a mink ranch and the National Hotel. He was a tough, hard-working man who was very loyal to his family and friends. My mother, Bertha, was one of a few women to graduate with a B.A. from the University of Manitoba in the nineteen twenties and was a competitive tennis player. She taught special needs students until she married my father in 1928.

I was a child actor and singer, beginning, at age eight, with my award winning performance in Grand Beach on the CBC Radio sponsored talent show. I performed in many local theatre companies and venues and had a featured role in CBC Radio's "The Jacksons and their Neighbours" for almost twenty years. I was also a member of The Four Chords singing group and the Shaarey Zedek choir.

I followed my mother to the University of Manitoba, not to take classes, but to perform in Glee Club productions. Following a one-year hiatus in Toronto working in show business, I returned to Winnipeg. Shortly thereafter, Suzanne and I married and I went into business before returning to university to complete undergraduate studies at age thirty.

Together, with toddler and infant, Suzanne and I then moved to Edmonton where I obtained Masters Degrees in Sociology and Hospital Administration on scholarship. I also taught drama at Camp B'nai B'rith in Alberta and worked for the Edmonton Jewish Community Centre. While there, we made very close friendships that have endured to this day.

We returned to Winnipeg to fulfill my scholarship obligations and to be closer to family. After working in hospital administration in Winnipeg for a few years, I became involved in real estate, property management and development. Over the years my special interests have included the Chai Folk Ensemble, Winnipeg Humane Society and the Barbershop Society.

I am the only child of Noah Epstein and Lillian Mogle, who were married in 1941. My mother, Lillian, was a strong, intelligent and beautiful woman who arrived in Winnipeg as a child from Russia with her family in 1924. A talented musician, she played the piano for the silent movies during the Depression to help support her family. My father, Noah, was the successful Winnipeg-born owner of Selkirk Fisheries. Sadly, my kind, gentle father died when I was only fourteen years old.

I remember a happy childhood, surrounded by a loving family, as I was the youngest of all my cousins and the only girl in the family. I was active in the YMHA, USY and BBG, attending B'nai B'rith Camp in both Lake of the Woods and Starlight, PA. My parents instilled in me a sense of pride in myself and in my Jewish heritage, strength of family ties, a desire to excel, and the importance of moral values.

I attended Teachers' College after marriage and taught for two years before returning to the University of Manitoba to obtain my Bachelor of Arts degree. When Earl and I became parents, I chose to stay at home to raise our children, devoting much of my time to volunteering for Jewish and other organizations. When the youngest of our three sons went to kindergarten, I went to work full-time as a teacher-librarian at Joseph Wolinsky Collegiate. Later, I returned to the University of Manitoba for my Masters of Education degree, winning a graduate students' scholarship, before beginning a new career as a school psychologist.

We consider our most important achievement together to be our three wonderful sons, Noel, Matthew, and Michael. Growing up, they all became involved in the Jewish community and followed in their father's footsteps becoming involved in music and the performing arts. Today, our oldest son, Noel, is a partner in a national law firm in Vancouver and chairman of the board of Ballet British Columbia. Our middle son, Matthew, with his law and business degrees, is a co-founder of a software company in Toronto and produced a CD of new arrangements of Canada's national anthem. Our youngest son, Michael, has a fine arts degree in music. A jazz singer and veteran of a national children's television series, he currently manages creative services and production for an international toy company in Toronto.

While we understand that our boys moved away from Winnipeg to pursue career opportunities, we believe that the Winnipeg Jewish community helped to give them the roots and wings to further their accomplishments. The ties that bind are strong and they return home regularly for renewal and reconnection. They continue to maintain close friendships that they developed at Ramah Hebrew School. The values and skills they learned at home make them important contributors to the communities in which they now live.

Although our family connections to Winnipeg have diminished, we have remained connected to the Winnipeg Jewish community through organizations such as Hadassah-WIZO, Youth Aliyah, Shaarey Zedek Synagogue, and Rady JCC. We enjoy our life here and are proud of what the community has achieved and what it continues to offer.