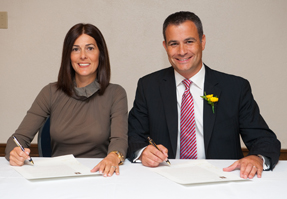 Steven Kroft signs his story for the Endowment Book of Life 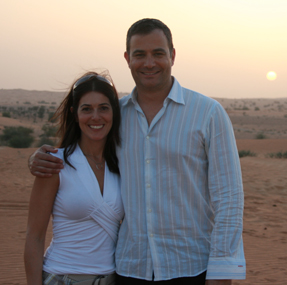 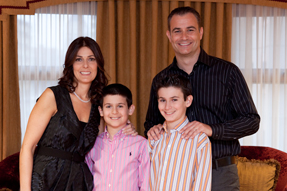 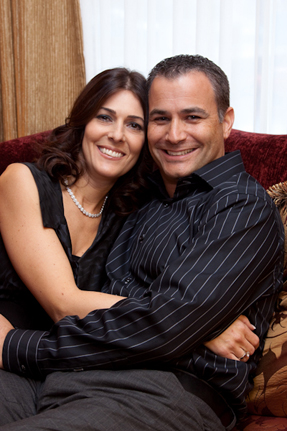 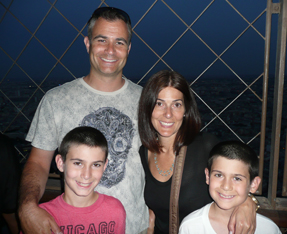 I was born in Winnipeg in 1967 to Richard and Hillaine Kroft (née Jacob), two exceptional people who have always devoted themselves to the well-being of their family and community.

My dad's father, Btsalil Krawcjenski (later Charles Kroft), was born in Kolishky, Russia, in 1906, and came to Canada in 1912. My dad's mother was Heloise Cohn, who was born in Winnipeg in 1910. Her mother's family was from England.

My mom's father was Nathan Jacob who was born in Winnipeg. Nate was well-known as the builder of a successful clothing business (Tanjay), and as a champion golfer. My mom's mother was Anryette (Anry) Silverman, whom I remember as a beautiful woman. Nate passed away at the age of 50, leaving my grandmother and her four daughters (of which my mom was the oldest).

My father was trained as a lawyer, but decided not to practise after being called to the Bar in 1963. Instead, he took an early interest in McCabe Grain, a public company headed by his father. In looking for other business opportunities, my dad was introduced to an engineer who was developing a product for a plant scientist. With that introduction, the Kroft family would ultimately develop Conviron into the world's largest supplier of plant growth chambers used by researchers in more than 90 countries.

As a friend and disciple of Sol Kanee, my dad was introduced to Mitchell Sharp and ultimately became Sharp's executive assistant while he served as the Minister of External Affairs in the late '60s. Thirty years later, my father returned to Ottawa as a Senator for seven years. He completed his distinguished career after serving as Chair of the Standing Senate Committee on Banking, Trade and Commerce.

In the community, my dad held leadership positions with the Winnipeg Jewish Community Council, the Jewish Foundation, the Royal Winnipeg Ballet, the Pan-Am Games, and more. He was also involved with Israeli causes, and during the Yom Kippur War in 1973 was instrumental in revitalizing the Canada-Israel Committee.

My mom has always been a "doer." She was a social worker, and later became involved in politics. She ran successful campaigns for Lloyd Axworthy and Sharon Carstairs, and served as a Vice-President of the Liberal Party of Canada. In 1989, after trying to find someone to properly wrap a fragile gift she wanted to send to the U.S., she concluded that Winnipeg needed a store that could offer such a service. This led to the founding of Pack & Post on Corydon Avenue, which Mom ran for more than 15 years.

My parents' most important accomplishment, though, was providing a wonderful upbringing for me and my siblings, Beth and Gordie. We took memorable family trips to Florida, Israel, France and England (we even spent a few weeks one summer in a motor home), and spent our summers with our cousins at Falcon Lake. I went to BB Camp twice, and spent other summers at tennis camp in Wisconsin. Beth, Gordie, and I always had fun together, and as we got older, shared many friends. While we live in different cities today, we remain very close, as do our kids.

My early schooling was unconventional for a Jewish boy from River Heights. My parents decided that we should learn to speak French, and so we went to Sacré Coeur in the inner city, which at the time was the only French immersion school in Winnipeg. That decision proved to be instrumental in my development, as I became friends with kids from all ethnic and economic backgrounds. Though I perhaps didn't realize it at the time, it gave me an appreciation for what I had, and for what others lacked. After grade six, I continued with French immersion at River Heights Junior High and then attended, and graduated from, St. John's Ravenscourt. I attended Sunday school at Ramah School, and studied for my Bar Mitzvah, which I celebrated in 1980 at Shaarey Zedek Synagogue.

After graduating from the University of Manitoba in 1988, I took a year off to get some work experience at John A. Flanders Real Estate, and then studied law at the University of British Columbia, graduating in 1992. I practised law in Winnipeg at Fillmore Riley until 1997, when I joined Conviron as Counsel & Vice-President of Corporate Development. Though I didn't know much about the business, I was determined to quickly learn as much as I could. I attended training sessions dealing with everything from refrigeration systems to lighting technology. I became the company's president in 1998 when my father was appointed to the Senate. In 2006, I assumed majority ownership, and Conviron continues to grow and innovate.

Moving back to Winnipeg after law school proved to be a wonderful decision for me, particularly because it was upon my return that I started dating my future wife, Lisa Golfman. Lisa and I were married in 1994, and we are the very proud parents of Nathan (born in 1998) and Alex (born in 2000). Lisa is also active in the community.

From an early age, I was taught the importance of giving back to my community. My community activities are an integral and fulfilling part of my life. After 12 years of involvement with the Jewish Foundation, I am proud to now be JFM's president. I have also been active in a number of other organizations, including the Sharon Home, Prairie Theatre Exchange (where I served as president), the Young Presidents Organization, the Business Council of Manitoba, the Grow Winnipeg initiative, the Innovation Council of Manitoba, and the Canadian Manufacturers and Exporters.

As a city and as a Jewish community, we have always punched above our weight. Our generosity and sensitivity to the needs of others are unparalleled. Lisa and I have learned over the years that if you open the door for someone in need just a crack, they will leap through the door and accomplish great things. I hope my participation in the Endowment Book of Life encourages generosity in others, and inspires my sons to do great things for their community throughout their lives.

These are great times to be Jewish in Winnipeg; I am more optimistic about the future of our community and our city than ever before.