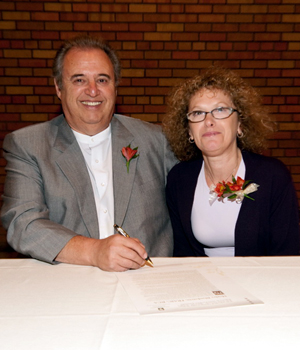 Sheldon Earn signs his story for the Endowment Book of Life 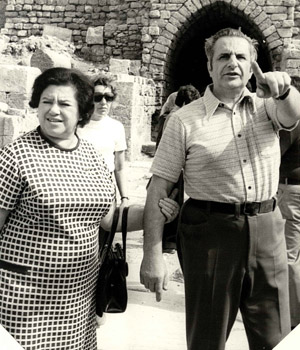 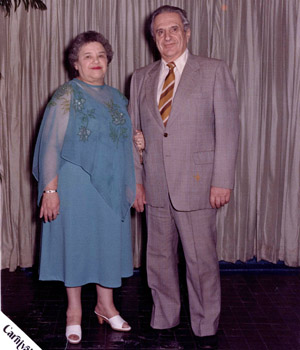 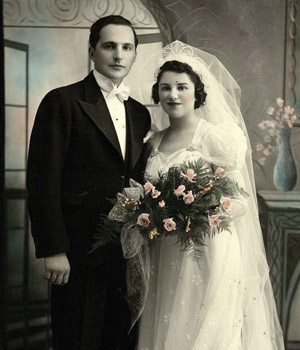 Sheldon's parents, Bessie and Hymie Earn on their wedding day 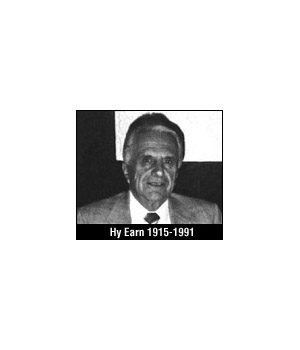 Hymie Earn didn't know that his invention would change the agricultural industry - and his life.

It was 1950 when the Winnipeg pharmacist (known to his family and friends as "Hy") created a groundbreaking ointment that prevented protein-deficient chickens from cannibalizing each other, a problem that plagued farmers. Hy's discovery was a success - so much so, that Shelbri Chemicals was born. The company, founded by Hy, eventually evolved into Dominion Veterinary Laboratories Ltd., the largest animal drug manufacturing and distribution company in western Canada. Today, Dominion Vet is a thriving business with customers all over the world. At the helm of the company are Hy's son Sheldon, Sheldon's wife Sonia (a.k.a. Sandra) and their son David.

Hy was born in Winnipeg in 1915 to Joseph and Sarah Earn. He lived in the north end with his family, which included siblings, Miriam and Abe. He earned a pharmacy degree at the University of Manitoba and worked at Dufferin Drug. Later, he opened St. John's Pharmacy, located on the corner of Mountain Avenue and Main Street. He sold that business when he started Shelbri.

Hy was a proud Freemason who held the prestigious titles of master mason and past master. A kind man who sat on the board of Mount Carmel Clinic, he made it his mission to make the world a better place. "He was a fantastic person - mild mannered and very charitable," says his son, Sheldon.

Bessie was born in 1917 to Sam and Mollie Tax. She grew up in Benito, Manitoba with her four siblings - Hy, Bill, Ann (Feldman) and Bertha (Fox). In the small town, located 475 kilometers northwest of Winnipeg, they owned the Benito Hotel and the Sam Tax General Store. Sam also worked as a cattle dealer and regularly did business in Winnipeg. Later the family moved to the city where they lived at 164 Burrows Avenue.

Hy and Bessie also lived in that house when they were first married. The couple eventually bought two homes; the first at 345 College Avenue and the second at 756 Niagara Avenue.

Bessie has always been a loving mother to her two sons, Sheldon, born in 1942 and Brian, born in 1949. She adored her husband. Her work at Hy's two businesses helped make them a success. Today, at age 92, Bessie lives at her condominium on Sinclair Avenue. She is proud of her kids, including Brian, who recently retired from his position as the Dean of Psychology at the University of Guelph.

Sheldon often recalls growing up in Winnipeg. It was here that his parents instilled in him a strong work ethic. He earned his first job at age eight filling bottles at his father's fledgling Main Street business. As a teen, Sheldon spent two summers working as a cook and waiter on the Canadian Pacific Railroad train from Winnipeg to Vancouver. He later went to the University of Manitoba where he studied to be a chartered accountant. After articling with two Winnipeg firms, he took a job as controller for city entrepreneur Nathan Finkel, who owned several businesses. In 1969, Sheldon became the controller for Dominion Vet and gradually took over the company from his father.

Sonia Earn was born in Bergen-Belsen, a camp in Germany for displaced people. A four-year-old Sonia immigrated to Winnipeg in 1950 with her parents, Shloima (a.k.a. Sam) and Manya Feder.

The Feders came to Winnipeg with the help of business owner Mr. S. Stall who gave Shloima a job as a tailor. Shloima worked for the Winnipegger at his Exchange District factory, S. Stall and Son Ltd. After five years of carefully saving his earnings, Shloima bought the Brunswick Hotel and later, Canada House.

Sonia recalls her father as mellow and good-natured and her mother as determined and outspoken. While Shloima loved to read history books, Manya loved to play cards, particularly with her son-in-law, Sheldon.

The couple were proud of their children - Sonia, Alex (now a Winnipeg dentist) and Katya (now an Ottawa physiotherapist). Family meant everything to them - their children and grandchildren. The pair has since passed away. Sonia thinks about her parents every day; she was close to both of them. What her parents didn`t give her in material items, they made up for in love.

Sonia attended Luxton School and West Kildonan Collegiate and is still great friends with some of the girls she grew up with. After high school, she moved to Vancouver where she worked several jobs. Later, she spent a year in Israel. In 1990 - after many years working at home raising her children - she decided to join her husband`s business. As Dominion Vet`s head of sales, she has helped drive the company to the top of the animal drug industry.

Sonia and Sheldon have four children: Shane, Aviva, David and Darren. Shane lives in Newport Beach, California and is married to Maren Jespersen. They have a son, Samson, named after Shane's grandfather. Shane has worked as Dominion Vet`s export manager. Aviva, who has a degree in social work, lives in San Diego. David has a degree in environmental chemistry and is in the process of taking over Dominion Vet. He is married to Shamona Harnett, a freelance journalist. Darren is founder of a successful business, Grants International. He is married to Dr. Wai-Ming Leung. They have two children, Kai and Nadia.

The Jewish community is a vital part of Sonia and Sheldon's home. Sheldon grew up singing in Cantor Brownstone's choir. He loves music and has performed with choirs at the Rosh Pina and the Shaarey Zedek synagogues. He has davened at the Talmud Torah and the Ashkenazi. He has also taught many Bar and Bat Mitzvahs. Sheldon is currently a board member of the Jewish National Fund and a member of the Jewish Foundation of Manitoba Investment Committee. Like his father, he is also a master mason and a past master.

A poignant moment for Sheldon: Conducting the burial and unveiling services for his parents-in-law - whose Holocaust experiences forever changed them.

Sheldon says that a recent medical procedure "gone wrong" has changed his own life. "A hearse is never followed by an armoured car," he says. "You simply can't take it with you."

The Earns' hope their gift to the Endowment Book of Life accomplishes two things: helps to make the world a better place and inspires kindness in others.