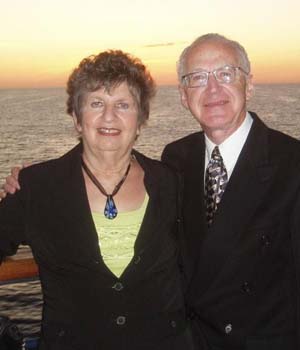 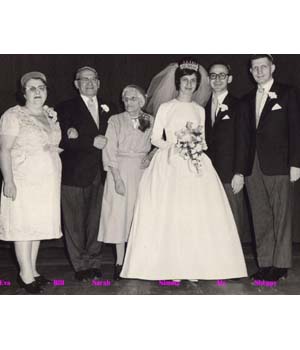 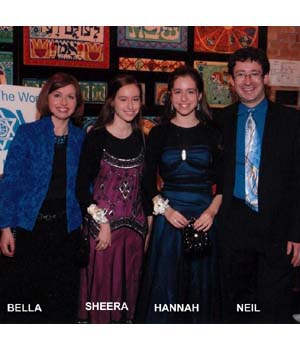 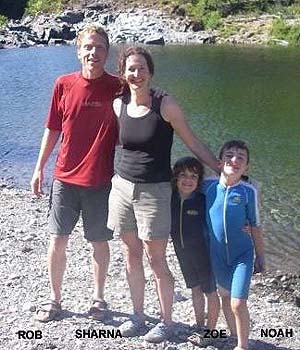 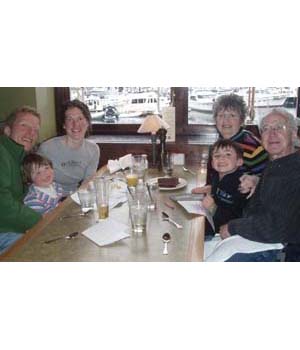 Hy and Simma enjoy time with daughter Sharna and her family

A hard-working young man from small town Saskatchewan meets a pretty legal stenographer from Winnipeg and the rest — as they say — is history.

My father, William Adler was born in Russia in 1903. Jews were experiencing the persecution of the pogroms and only a few years later, his father Samuel (born 1872) left Russia to seek a better life in Canada. In 1911 Samuel sent for his wife, Sarah (Brezever) and young son to join him. They settled in the Hirsch Colony near Bienfait, Saskatchewan where they owned and operated a general store and later a coal mine.

My mother, Eva Eisenstein, was born in Boston, Massachusetts in 1910. A year later her parents, Leah (Silverstein) and Joseph Eisenstein who had earlier emigrated from Mizerich, Poland, decided to move to Canada. They settled in Winnipeg, Manitoba where my grandmother worked as a seamstress and my grandfather operated a junkyard.

My parents met and married in Winnipeg and my mother moved to Bienfait to start married life. While he operated general stores in Hirsch and Bienfait, she began life as a homemaker. A point of historical interest is that, as one of the few Jewish families in Bienfait, my parents hosted Annie Buller, who turned out to be an outspoken strike agitator in the now infamous 1931 miners' uprising.

Two children were born in Bienfait, my brother Sheppyz"l and sister Barbara (Mazo). My parents then decided to return to Winnipeg where I was born on April 21, 1942. The family spent a few summers in Birtle, Manitoba where my father was attempting to establish a cattle ranch. He soon returned to Winnipeg where he worked for Soloway Supermarket for many years until his retirement. He was an honest man who was friendly and outgoing and well-liked by many people.

I grew up on Inkster Blvd. in Winnipeg's north end. I attended Champlain, Ralph Brown, Luxton and St. John's Tech. I did well at school and enjoyed both my studies and my friendships with other students. I loved reading and playing tennis, and all the activities of a happy childhood — baseball games with neighbourhood friends; movie matinees at Deluxe Theatre; seders and family gatherings with a large group of cousins, aunts, and uncles; summers at Winnipeg Beach; Saturday afternoons at the YMHA for clubs, swimming and dances; activities at B.B.G.; finding "treasures" in my grandfather's junkyard with my cousins and siblings; and Sunday family dinners at my grandparents' home. While my Dad worked long hours, my mom made a warm and loving home. She loved to cook and bake — our home was popular for neighbourhood children who loved to visit and consume her wonderful homemade cookies and pastry. Her blueberry pie was exceptional — it can never be replicated!

Following high school, I studied to become a Registered Nurse at the Winnipeg General Hospital. I graduated in 1962. One of my fellow student nurses was engaged and she introduced me to her fiancé's brother. His name was Hy Kraitberg and before long we were an "item". We were married at the Hebrew Fraternal Lodge on December 1, 1963.

Hy and I have been blessed with two children, Neil and Sharna. Neil graduated from medical school and is a practicing psychiatrist. He is married to Bella Chudis, a teacher, volunteer and mother to their twin girls, Hannah and Sheera. They live in Ottawa. Sharna is an attorney working for the B.C. Attorney General's Department. She is married to Rob Garson, also trained as a lawyer and now a stay-at-home dad to their two children, Noah and Zoe. They live in Victoria.

I am very proud of my husband, our children and our grandchildren. Each one has enriched my life. I am particularly gratified that my children are good role models in their communities, that they have made great progress in their chosen professions, and that they consistently demonstrate compassion and mentschlichkeit towards others. For each one of them I wish long life, health, happiness, success in all their endeavours, and a continued love of Jewish value and tradition.

Over the years, I have been involved with the Winnipeg General Hospital Nurses Alumnae, J.W.I., Peretz School P.T.A. and various other charities. I enjoy the warm, caring nature of our Jewish community and its Yiddish culture and traditions. I hope that future generations will understand the richness of those traditions.

Today I enjoy bowling, bridge, and an occasional round of golf., and of course, travelling to be with my children and grandchildren. As all of our family now resides elsewhere, our participation in the Endowment Book of Life will allow us to mark our life here in Winnipeg and the roots that we have planted here.

To those I love, and to those who read this, I say, "Life is short, enjoy it while you are able and don't sweat the small stuff!"