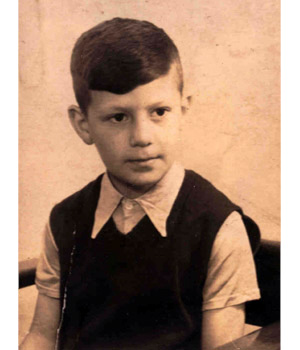 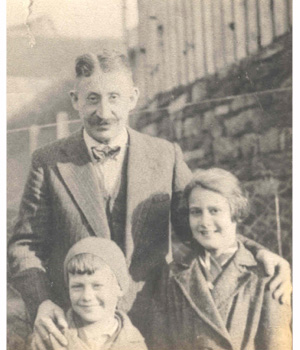 Sigi's father with Sigi and sister 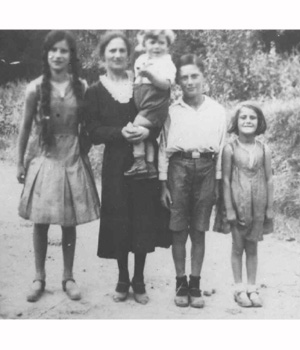 Sigi's mother with Sigi in arms, and his 3 siblings 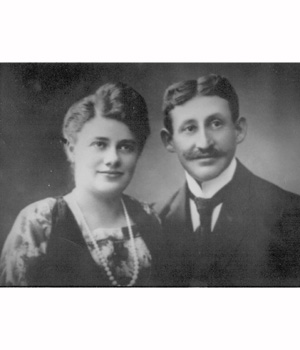 Sigi's parents at their engagement 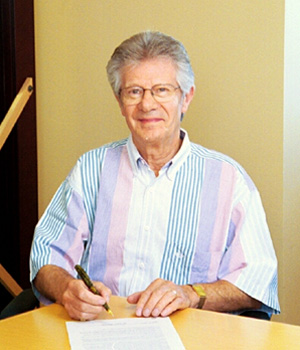 My parents were Jakob and Hannschen (Reutlinger) Wassermann. I was born on November 13, 1931 in Konigsbach, Germany, a small town where Jews had lived since the 1600's. Only one grandparent still lived, my father's mother. I am the youngest of four siblings, I have a brother, Julius, and two sisters, Ilse and Erna.

Ours was an orthodox Jewish home and I remember going to synagogue with my father. My early years were happy. Although I heard radio speeches through open windows and noticed the distinctive swastika, I was too young to recognize what was happening. It was during my first year of school, when one day the teacher asked me to come to the front of the class and then instructed me to go home, that I became aware of something brewing. Jewish children could no longer attend public schools.

On the night of November 9, 1938 Kristallnacht shattered our town. There was extensive damage to many homes and stores, and my father and I went to see our beloved synagogue, burned to the ground. Our home was spared since the Gentile people who lived downstairs said that they owned the house. A short time later, soldiers came to take my father to Dachau, but he was in Aufhausen staying with his mother - they took Julius instead. He later came back home saying that they had given him one month to leave the country, so he and Ilse left for England.

During this time my parents also registered me to leave for England via the Kindertransport and in June of 1939 I was taken to the station. My mother was not allowed on the platform and she stood outside peering through the upright metal fence until I could see her no longer. My father came with me as far as Karlsruhe, where I was put onto a train with many other children. I was so innocent, I still thought of it as an adventure until the soldiers came through the cars and looked through my suitcase to see if it was packed as had been prescribed. The train arrived in Holland and we boarded a boat to England. My records say that I "arrived in the United Kingdom as a refugee from Nazi oppression on the 28th of June, 1939." I was 7 years old.

After a brief stay in Manchester, I was sent back to Dovercourt, a holiday camp, where children arriving by Kindertransport were first taken. People came to look over the children who arrived ... 300 per week. Those not "claimed" were moved to various hostels in England, Scotland, Ireland and Wales. I was moved to Tumbridge Wells in Kent and from there to London. During the Blitz, we were evacuated to a hostel in Ilkley, Yorkshire, in northern England. There were about 20 boys. My section was called the "nursery" ... where the youngest was 4 and I was the oldest at 8. There was a section with older boys, 17 was the maximum age allowed to be accepted by the Kindertransport. I attended elementary school and won a two-year scholarship to a technical college.

Meanwhile, Julius and Ilse were living in London. Both served in the British Army. My other sister, Erna, who was 13 at the time, had stayed with my parents and was deported with them in 1940 to Camp Gurs, located in the Pyrenees followed by transfer to Camp Rivesaltes, France. She was rescued from this camp by a Jewish organization called O.S.E. located in Paris and subsequently moved all over France, even living in a convent. She changed her name, keeping only her initials intact, and spent the last few years of the war in the south of France as a housekeeper for a woman who knew of her background. It was she who found me through the Red Cross after the war.

It was not until 1995 that we learned of my parents' fate from a book published in France by Klarsfeld that listed all deportees. My father was deported first to Camp Drancy and then to Auschwitz on Convoy #25 in August, 1942. My mother followed the same route a month later on Convoy #33. Neither one survived Auschwitz. In all we lost 19 family members.

In 1947 our hostel closed and I went to London. I lived at a mixed hostel with both boys and girls until 1950 when I was drafted into the British Army. Since I had become a British citizen at the age of 16, I now had to serve two years of compulsory service in the Army. After being discharged I returned to my former employer. By now my siblings had emigrated and I too longed to cross the ocean. Since moving to the United States would mean another two years of army service, I chose to come to Canada. After visiting with Erna in New York, I first went to Montreal for six months, then took the train to Vancouver. Within a day I had a place to stay and by week's end also found work. I stayed with my new employer for the next 21 years.

The move to Winnipeg came about when my employer offered me the opportunity to establish a branch office, which I operated for 11 years. In 1975 I joined the Winnipeg Convention Centre. I attained the senior management position of Director of Client Services. I remained with the Centre for 25 years until my retirement.

Jackie and I always had the desire for our children to learn more about their heritage and we were pleased to have all of them attend Winnipeg's Jewish schools. All have gone on to professional careers ... Jeffrey as an anesthesiologist in Toronto, Trevor as a pharmacist in St. Rose du Lac, Manitoba, and Michele as a physiotherapist in Vancouver. We also have three beautiful grandchildren.

I decided to recount my history in the Endowment Book of Life to record past experiences, to express my gratitude to the community, and most of all to pay tribute to the memory of my parents.