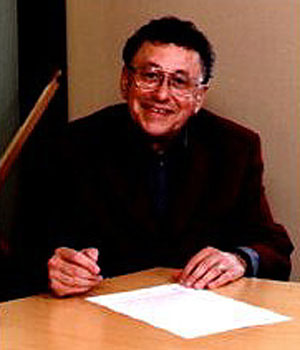 Sidney Halpern was raised in the old North End, where his parents had settled when they came from Poland in 1929. Chaim & Bertha Halpern worked hard, Chaim as a pedlar and Bertha as a "chicken flicker", in order to provide a solid foundation of education and religious devotion for their three sons.

Growing up on Stella & Andrews, Sidney says his strongest memories are often of being raised in a religious Jewish family, attendance at Talmud Torah School, and at synagogue seven days a week. In addition to Talmud Torah, Sidney attended Aberdeen and St. Johns High School, continuing on to the University of Manitoba. He has subsequently pursued a distinguished career as a Chartered Accountant with particularly heavy involvement in the textile industry, becoming President of the Association of Manitoba Apparel Manufacturers.

In his youth Sidney belonged to Yehuda Hatzair & Bnei Akiva. He followed this up in his adult years, becoming a devoted member and then leader of a long list of Jewish community organizations. He selected as his three most important involvements: Winnipeg Jewish Community Council - Board member then President, Jewish National Fund of Canada - National President, Sharon Home - President.

In his own words, Sidney says that he has participated in the Endowment Book of Life "so future generations may understand our desire to ensure that they are imbued with strong Jewish feelings - with commitment to community and to Israel."

He also wishes "to motivate our children and grandchildren to want to be educated as to what it means to be Jewish and why we toiled so diligently to try and ensure a future Jewish Community with vibrancy".