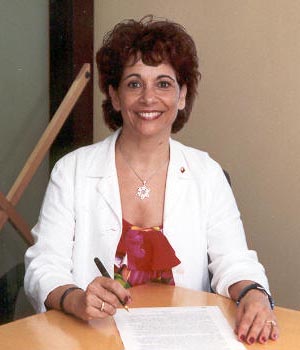 Noga and Aharon Paz, my parents, were born in Baghdad, Iraq and were married there in an arranged marriage. They made an Aliyah to Israel in 1950. On December 26 of the same year I was born in Haifa Israel, the first generation of Sabra in my family.

In Iraq my father had been in an administrative position, but discrimination between Ashkenazi and Sephardim Jews was prevalent and the country was still new, so he got a job as a gardener. He was a very intelligent man with fluency in Arabic, English and Hebrew, also a great dancer and a musician who played the Ud, a stringed instrument. I loved listening to him chanting the prayers on Friday nights and on holy days. He was a warm and sensitive person with a great sense of humour and a strong love for my Mom - I can still see him massaging her feet after a long day of standing in the kitchen. He passed away in 1988.

My mother still lives in Haifa and I have learned so much from her - how to take responsibility, to cook, to bake, to sew, to care and share with and for others. She made each holiday special with wonderful foods and costumes, all made by her. She is a warm and caring person and like my father is very smart, a great dancer and has a wonderful sense of humour. She has done such a great job of raising my three brothers, five sisters and me, all with grace and beauty - and she is very beautiful! As a child, I remember sitting and staring at her, thinking how beautiful she is.

I have fond memories from my early years at school. We were taught to respect others, especially the elderly. My favourite classes were Hebrew literature and biblical studies. Kabbalat Shabbat on Fridays... Israeli folk dancing at recess time and at school assemblies... singing on Yom Ha'zikaron for the soldiers of Israel... dancing on Israel Independence Day... field trips... working on a kibbutz in the banana plants to raise money for school trips ... wonderful memories from a very fun childhood. My friends and I had a favourite past-time on Shabbat which was to go for walks to the beach or climb up to the Carmel Mountains. As a child and young adult I belonged to Hano'ar Haov'ed ve'Halomed (like BBYO) and I especially enjoyed our artistic programs and the feeling of camaraderie.

I feel privileged to have grown up with a variety of cultures. My best friends and neighbours were Ashkenazim and we had great relationships. Over the years I took different courses through the Continuing Education of the Technion in Haifa such as English Business correspondence and Business Administration. I have always loved music and dancing and I taught Israel Folk Dancing for 20 years in Israel and Canada. I love travelling and I have been in many countries around the world. I am fluent in Hebrew and English and also speak and understand Arabic.

I married Dr. S. Shalev in Israel and we moved to Winnipeg when he had a job offer at Health Sciences Centre. We have one son, Harel who was born on August 17, 1979. After our divorce I was a single parent for eight years before marrying Sheldon Minuk in 1992, whom I met through B'nai Brith. He has two children from a previous marriage, Kimberley and Kevin.

My years as a single parent were difficult and I have the Winnipeg Jewish community to thank for helping me through this time. I want to thank the community and the Board of Jewish Education for making it possible to help me to educate my son Harel in the Jewish Schools and camps. I would also like to thank The Jewish Foundation of Manitoba who helped to sponsor me to go to an Israeli Dance workshop and bring new fresh dances to my students here in Winnipeg.

I want to thank Gail Frankel for giving me the chance for employment at the Jewish Post & News and Jerry Maslowsky for having faith in me and teaching me how to sell advertising. After a year at the Jewish Post I worked as an insurance agent at New York Life for two years, then went to Success College to take a Business Administration course that helped me to get back into the field of administration. I worked for B'nai Brith Canada for three and a half years until I was called for an interview for State of Israel Bonds where I now work as City Director. It was thanks to David Cohen that I learned about this job, a job which I love.

It is because of my appreciation for all the help my son and I received from the Winnipeg Jewish Community that I decided to sign the Endowment Book of Life. I hope they all go from strength to strength and that they will always be able to help the people in need both here in Winnipeg and in Israel.