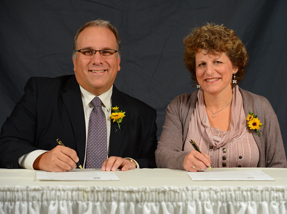 My Zaida Hyman Shell came from Uman, Ukraine. He and his family escaped pogroms and, at the age of 13, he arrived in Canada and went to work. The patriarch I knew had no trace of an old country accent and retired as a furrier in his mid-40s. My other three grandparents were all born in Manitoba: Kayla Doner, Jen Simkin, and Sam Cohen. Their parents were also immigrants with similar stories of leaving everything behind and coming to a new world with nothing.

I'm extremely grateful to my grandparents and great-grandparents for their resilience. All of their hard work and perseverance in the new world allowed me to be born into privilege and have the opportunities that I have had in my life.

My parents, Jerry and Carole Cohen (née Shell) Z"L, were amazing together. They married young at the ages of 20 and 22 and spent the first year of their marriage in Israel. The year was very influential in their lives and in how they chose to raise me and my two younger siblings, Naomi (Coodin) and Ari. They transmitted their love of Israel and their belief in a good Jewish education.

When I think of my childhood, some of my strongest memories are Shabbat dinners with family; family camping trips; summers in Gimli; and beautiful Kabbalat Shabbat services at Camp Massad and Habonim Camp. I also loved the cross-country skiing trips I took with my Mom and playing softball with my Dad as the coach. I am grateful to my parents for their loving home and the gift of siblings who are life-long friends. Today, Naomi and Ari and their families, and my Dad and his wife Susan are important figures in my life.

I grew up in Garden City, at the time a new suburb in north Winnipeg. I attended Talmud Torah and Joseph Wolinsky Collegiate until grade 11. I graduated high school from the University of Winnipeg Collegiate. My grade 10 year at the Hula Valley Regional High School on Kibbutz Kfar Blum was most memorable. I had the opportunity to live on kibbutz, working and travelling in Israel as a teenager with the same privileges and responsibilities of Israeli kids my age. I felt very lucky and very special. Even the hours spent in bomb shelters, when Katyusha rockets fired from Lebanon landed close by, left me with the sense that, even in dangerous times, people endure and life goes on. I was also left with an appreciation of the safe life that I have in Canada.

After grade 10, having been influenced by my classmates and my kibbutz experience, I co-founded a chapter of Habonim Labour Zionist Youth in Winnipeg. I spent the summer after grade 11 at a leadership training camp in upstate New York.

After high school, I went to Israel for a year and volunteered in Ofakim, a development town. It was there that I began to see poverty, economic disparity, and social problems first-hand as I worked alongside Israeli kibbutzniks in a program called Garin Oded.

For 11 years I practised social work and lived in a variety of cities including Saskatoon, Philadelphia, New York, Jerusalem, and Vancouver. I then began a journey of exploring my Jewish identity which took me to study at the Jewish Renewal Life Centre in Philadelphia. It was there that I developed a further appreciation for Jewish diversity and embraced Jewish spirituality through song, dance, meditation, and prayer.

At the age of 34, I returned to Winnipeg to be with my mother who was ill with cancer. I began working as a school social worker which I continue to do today. It was then that I met Stu Slayen. From the beginning of our dating relationship I was happy when I was with Stu. I was always laughing with him and felt like I could completely be myself. We enjoyed golf and tennis together and I felt truly blessed to be falling in love with such a mensch. Stu was both the funniest and kindest person that I ever met. We married in 1998. Our wedding was joyous, spiritual, meaningful, and fun. We were surrounded by loving family and friends. When I married Stu I felt not only welcomed by his loving family but by a community of warm, wonderful friends who have enriched our lives and those of our children.

Our daughter Cari was born on our first anniversary, and our son Noah was born two years later on Stu's birthday. Fortunately, we have been able to provide a loving home for them and give them the example of parents who love each other and who peacefully work out their differences. We have shared our love of family and friends and opened our home and our sukkah to friends and family. Together with our children we celebrate Shabbat, and go to synagogue in the hopes of showing them that there is more to life than just satisfying one's individual wants and needs. We are volunteers at Congregation Etz Chayim; we have participated in fundraising walks to combat cancer; we have volunteered at Winnipeg Harvest; and we have encouraged our children to give tzedakah and perform acts of community service.

We have been blessed with healthy children who are delightful companions. We cherish our time with them, especially our summers in Gimli and at Camp Wasaga.

In my 50 years of life and 25 years of practising social work, I have borne witness to many stories of poverty, abuse, addiction, and despair. I have tried to bring hope when life seems hopeless; I have tried to see the divine in everyone. I embrace the values of authenticity, integrity, balance, and peace.