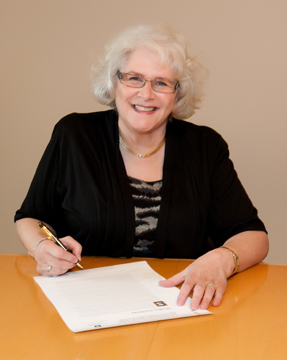 Shelley Saidman signs her story for the Endowment Book of Life 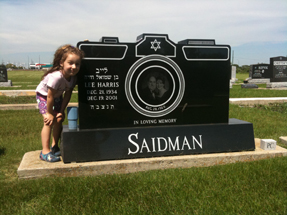 Shelley's granddaughter Zo�, by her grandfather Lee's headstone. The photo in the lens was taken at Gillian's and Ivan's wedding Aug. 19, 2001. The date around the lens is Shelley and Lee's wedding date. The "timer" is the mezuzah from their home 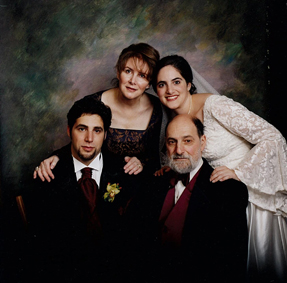 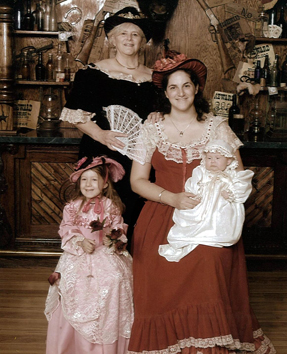 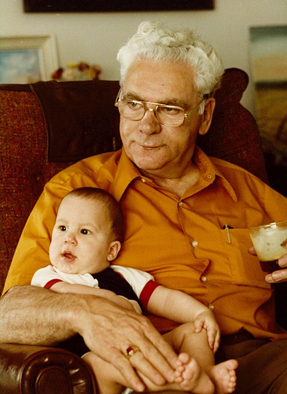 Shelley Saidman's remarkable commitment to her family and to her history radiates from every room in her distinctive old River Heights home. China serving platters from her grandmother, her father's archaic coffee grinder, her mother's lace appointed wedding dress, an old hand controlled water pump, and row upon row of sepia photographs and vivid, colourful paintings speak volumes about Shelley's passions, hobbies, creativity and roots.

Shelley's father Harry Swartz was born in the Lipton Colony in Saskatchewan and her mother Norma Minovitch was born in Regina. They were married in 1942 and Shelley, their only child, was born on Jan 9, 1948, the same year that Harry and Norma moved from their rural farm into the small city of Melville.

In Melville, they operated a Chinese food restaurant and then went into the furniture business. There were about a dozen other Jewish families in town, and Shelley recalls that because of this small number, she always felt that her religious identity was very important. She attended the local public schools, took Hebrew lessons with the other Jewish children, and celebrated the High Holidays and other festivals with their small community.

At 18, Shelley moved to Winnipeg to attend university. Although she lived in residence, family friend Eva Udow was very important in her life, becoming a surrogate parent to her. Many years later, when both Eva and Shelley's mother were living in the Shalom Residences in Winnipeg, Shelley had the opportunity to reciprocate much of the kindness and concern that Eva had shown her.

Shelley met Lee Saidman in 1967 when both were students at the University of Manitoba. She was studying human ecology and education and he was studying fine arts, having recently returned from a few years in California.

Like Shelley, Lee was also an only child. His parents, Clara Lertzman and Sam Saidman, had both arrived in Canada from the Ukraine as children. They married in Winnipeg, where Sam's family owned Saidman Sunflower Seeds on Aberdeen Avenue. Lee was born on Dec. 21, 1934 while they were living in Canora, Saskatchewan.

Tragically, Clara died when Lee was very young and as a result he spent parts of his childhood in boarding school and in the Jewish orphanage, before moving in with his maternal grandparents. His father Sam, who had put himself through pharmacy school by playing banjo in a band, eventually remarried and also changed careers, opening Winnipeg's iconic Sam the Camera Man, and later the Woodrow Fine Arts Gallery.

Lee and Shelley were married in Netanya, Israel in 1969. Back in Winnipeg, Lee joined his father in business and Shelley began a five year teaching career at Windsor Park Collegiate. She left teaching to raise her family. Their daughter Gillian was born on June 24, 1974, and their son Daniel followed on October 23, 1978. The family lived in St. Norbert for many years and then moved to a home in River Heights. Content with one another's company they found that no matter the size of their home, they always ended up together in the same room.

Gillian and Daniel both attended public elementary and high schools, and Daniel was in the first Hebrew bilingual class offered at William Osler School. The family became members of Temple Shalom, and in 1986 Shelley and Gillian celebrated a joint Bat Mitzvah. Shelley pursued a number of work and creative outlets while raising the children, for a time making porcelain dolls, designing women's clothing and working as a nutritionist. She and Lee travelled often, both for work and for pleasure and to spend time with Lee's extended family, the Lertzmans. Over the years Lee was involved in many photography and art related endeavours in the city, including the Jewish Heritage Centre's Cemetery Photography Project. He loved the photo business and was active in promoting art and educating his customers who often became friends. He also was a strong supporter of the West End Cultural Centre.

Both Gillian and Daniel attended Concordia University and the University of Manitoba, and followed in their parents' footsteps in regards to their studies and career choices. Gillian received a degree in human ecology and Daniel received a degree in fine arts. A talented painter, Daniel opened a community based art gallery called A Label for Art, a play on words on his dad's Yiddish name of Label. The gallery was located at 510 Portage Avenue, the same location from where his father and grandfather operated Sam the Cameraman. More recently, Daniel, whose partner is Jamee Anderson, worked for two years in the organized Jewish community. Gillian now lives in Montreal with her young family and works in marketing. She married Ivan Presser on August 19, 2001, and they have two daughters - Zoe born on June 6, 2005 and Aviva born on July 4, 2008. Their son Noah died at birth on June 4, 2004.

Lee passed away in 2001, two days before his 67th birthday. His final resting place is now marked by a headstone that creatively honours his memory, his passion and his love for family. Etched into the marker is the date that Lee and Shelley were married, an image of them taken at their daughter's wedding, and images of a camera and a mezuzah that once adorned their home. A full figure of Sam the Camera Man is depicted on the back.

As Lee had encouraged her to do, Shelley got a dog and moved into the old River Heights house that they had purchased together decades before as a nice place to retire. Shelley now shares that home with her partner Bruce McDonald, who has lovingly helped Shelley repurpose, renovate and refurbish the house.

This ongoing project has given Shelley the rare opportunity to merge many aspects of her life. These include the artwork and photography that were the shared passion of her husband, father-in-law, daughter and son; the do-it-yourself approach and attention to detail that she learned from her father, a man who could fix anything; the creativity that she inherited from her mother who loved to paint; the kitchen tools and utensils that made her grandparents' homes warm and inviting; and the values and love of family that have been affectionately passed down from one generation to the next. In her old home, Shelley's past, present and future perfectly meld.