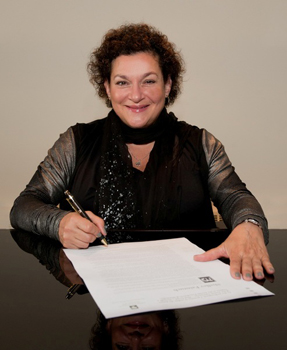 Shelley Faintuch signs her story for the Endowment Book of Life 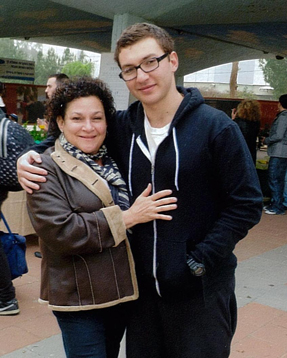 Shelley and her son Zev 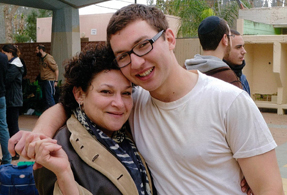 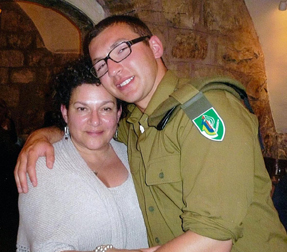 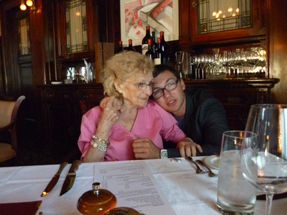 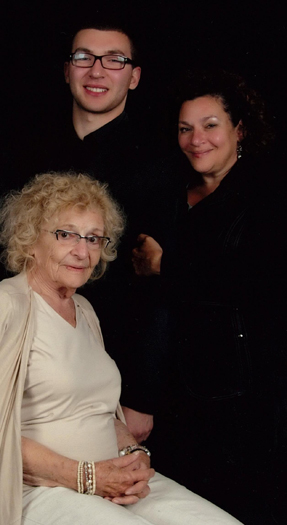 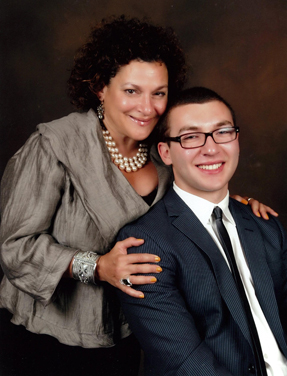 My life is anchored by a deep connection to our heritage; a passion for Jewish history and culture; and an unwavering commitment to Israel. My career, my interests, and the way I raised my son all reflect my bond with my Jewish ethics and values.

I was born in 1953 in Winnipeg to Dr. Henry and Sonja (Sophie) Faintuch (née Brusilovskaja). My father was born in Radom, Poland, and my mother in Kiev, Ukraine. They were married in 1944 in Samarkand, Uzbekistan.

My father's parents had been murdered in the Holocaust; my mother's father perished at Babi Yar. My maternal grandmother survived and returned to Chernovitz and then Kiev, where she spent the rest of her life.

My parents migrated to Winnipeg where my father had family. Until his travel papers were approved, he served as a physician in Eggenfelden, Bavaria, a displaced persons camp. He has been credited with saving the lives of numerous Jewish newborns after the war.

In Winnipeg, my father became the director of the Jewish Old Folks Home, known as the "Moshav Zekeinim" on Magnus Avenue and my mother was his assistant. My parents transformed it into the Sharon Home, a leading Jewish personal care home in North America. My siblings, Helene and Jack, and I grew up next door to the Home and our lives were intertwined with life there. It was like having over 100 babas and zaidas! We held seders and celebrated holidays with the residents (quite the haul of silver dollars at Channuka time!). Growing up around so many older and wiser people with so many remarkable stories to tell truly enhanced our lives.

I was one of the eight original dancers of Chai, rehearsing in Sarah Sommer's basement from the age of 11. Chai was a very important part of my life. I loved spending my childhood summers at Clear Lake with my real family and at Camp Massad with my Massad family. Being in Chai for about 10 years, participating in clubs at the YMHA, and going to Massad as a camper and counsellor helped shape my connection to Jewish community, creativity, and culture. Talmud Torah and Joseph Wolinsky Collegiate gave me a love of Jewish learning. Because JWC only went to grade 11 at the time, I graduated from University of Winnipeg Collegiate where I was the first female Jewish valedictorian.

Perhaps the most formative experience of my youth was my travel to Kiev with my mother to visit her mother and sister for the first time since the war. I was only 14 and it was the adventure of a lifetime. The USSR was a closed society and Jews did not have any access to anything Jewish or even news from the outside. People asked me to sing songs from Fiddler on the Roof, davven for them, and talk about Jewish life. I even smuggled in a siddur, sewn into the hem of my pants. It was an exhilarating experience that left an indelible mark on my soul; it was my first of many reminders of how connected the Jewish community is across oceans and over time, and how fortunate we are in Winnipeg to be able to express our Judaism.

While in grade 12, my view of life expanded into the global community. I got involved in the Overseas Students Association, and was inspired to travel to Europe and Israel for four months after graduation.

I returned to Winnipeg and completed my honours degree in French at the U of W, and earned the gold medal. After working with the provincial government on language and curriculum challenges, I accepted an offer from the U of W to coordinate the French language non-credit program.

I wanted to learn more about French and language and went to Laval for my Master's in linguistics and worked on my doctorate in the epistemology of linguistics. I also taught at Laval University, helped to launch the Graduate Students Association for Linguistics, and was then hired to lead the English-as-a-second-language program for the Modern Language School at Laval. I lived in Quebec City for 10 years but eventually began to feel uncomfortable with some of the political views of my colleagues about Jews, Zionism, and Israel and decided I had to leave, despite my invigorating career.

I went to Osgoode Hall in Toronto to study law and then moved to Vancouver where I had my son, Zev. In 1992, I returned to Winnipeg to start my new life as Zev's mom. Since his birth, Zev has been the centre of my life and my greatest inspiration. He participated fully and actively in every opportunity that Gray Academy offered. He was a P2K and March of the Living participant; served as student council president; was active in politics; and was an outstanding volunteer. He is currently serving as a combat soldier in the Israel Defence Forces because he says he has a "moral obligation to do something for the country that will always do something for me." I am in awe of his moral compass and am extremely proud of him.

Professionally, I am the Director of Community Relations with the Jewish Federation of Winnipeg and have been seconded to the Centre for Israel and Jewish Affairs as Associate Director of Local Partner Services. My job is to liaise with and provide advocacy support to other Jewish communities on the Prairies. My work is a labour of love. I care deeply about Israel, Holocaust awareness, interfaith and intercultural relations, and politics. I am proud to have helped launch the Asper Human Rights and Holocaust Program and develop the curriculum that is used nationally. My work on human rights awareness, Israel and Jewish advocacy, and the development of three complete television series on Jewish themes are highlights of my career.

My participation in the Foundation's Endowment Book of Life program is a tribute to my mother and my late father, a legacy for my son, and a perfect extension of my values. I hope that the program will help ensure a strong future for my child and all of our children.