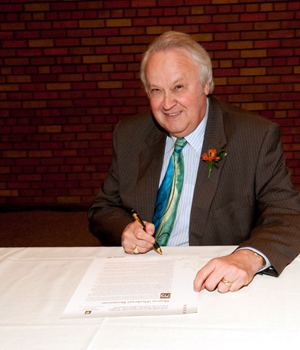 Sheldon Minuk signs his story for the Endowment Book of Life 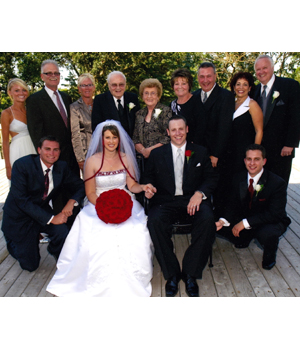 The Minuk family at Kim and Chris's wedding 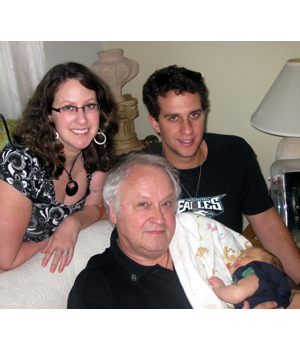 Sheldon with children Kimberley and Kevin and grandson Kyler

My grandparents, Berel and Tybel Minuk, immigrated to Canada from Czartorysyk, Russia in 1914. My grandfather struggled to make a living in this new country. He worked initially as a shoemaker, and later established Bluebell Grocery at the corner of Logan and Keewatin in Winnipeg's north end. It was there that he made a living for his wife and six children — Molly (Norm Lachter), Norm (Goldie), Clara (Max Zamick), Eva (Jack Rosenbaum), Yetta (Jack Levit) and my father, Harry.

My mother, Annette, was the daughter of Sara Rebecca (Smiley) and David Massie. My grandmother Sara emigrated from Tergogna, Romania and my grandfather David was born in Emerson, Manitoba.

My father purchased Bluebell Grocery from his father, and it was there where I was raised for the first 11 years of my life. Our family, which included my sister Arlene (West) and brother Jeff, lived in the residence at the back of the store and my first job as a boy was to unpack boxes and stock shelves. In 1965 we moved to 970 Sinclair Street, where my parents live to this day. My father later owned a second grocery store, Downtown Holiday Inn Foods. My mother has been active with National Council of Jewish Women and the Gwen Secter Creative Living Centre.

I attended Weston Elementary, Jefferson Jr. High, and graduated from Garden City Collegiate. My childhood and teenage years were busy with friends, AZA, B'nai Brith, and the Y. I was, and still am, passionate about sports, especially hockey and baseball. I have always had a keen interest in movies and also enjoy music.

After high school, I attended the University of Manitoba and earned a Bachelor of Arts in Political Science. I became interested in the insurance business and my first career was with Great West Life where I started in the pension department as an administrator and one year later moved into sales. I progressed to become a unit supervisor and in 1982 I had the opportunity to become the branch manager for Transamerica Life. In 1988 I had the opportunity to establish Minuk Insurance which now operates as the Minuk Financial Group, specializing in personal and corporate life insurance, group insurance, investment funds and financial planning.

For over 30 years, I have enjoyed playing baseball for the B'nai Brith men's baseball slo-pitch league. It was at Earl Barish's house at a baseball captain's meeting in July 1990, that I met Shoshana Shalev who had moved to Winnipeg from Israel in July of 1981. We were married on October 29, 1992. Shoshana was always involved with Winnipeg's Jewish community. She worked as the Executive Director of State of Israel Bonds in Winnipeg for twelve years. Shoshana is now an artist; another milestone this year was when she graduated with her Bachelor of Fine Arts in May, 2009 from the University of Manitoba. Shoshana has a son, Harel, from her first marriage. Harel graduated with a Business Administration & Marketing diploma from Red River College. He now resides in Europe where he established his own company, Mister Paz Events & Marketing.

My volunteer involvement has included serving on the Boards of State of Israel Bonds and B'nai Brith. In 1995 I had the privilege of travelling to Israel on the March of the Living with the State of Israel Bonds delegation. The trip profoundly impacted both my worldview and my "self-view". I have visited Israel numerous times and I am an advocate of The Association for the Soldiers of Israel.

The Jewish community — Klal Israel — is important to me. My Endowment Book of Life promise to the Jewish Foundation of Manitoba is a reflection of that commitment. May the community go from strength to strength.