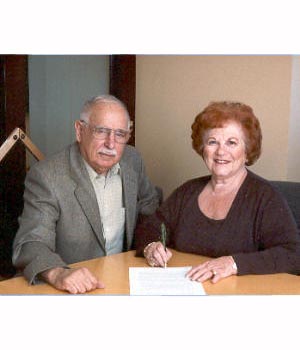 Sheila and Shom sign their Endowment Book of Life story 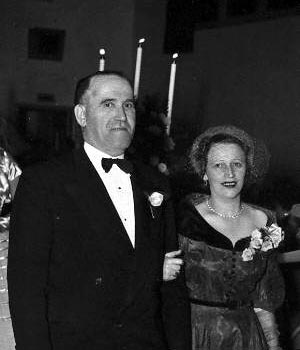 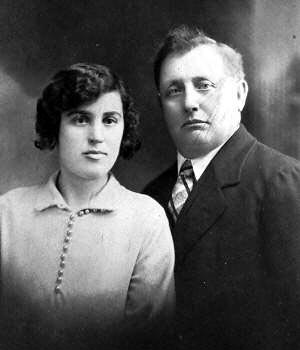 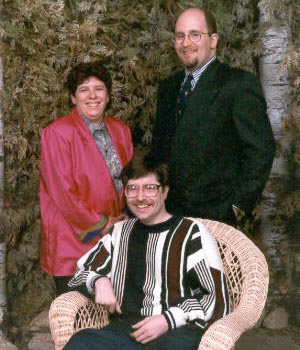 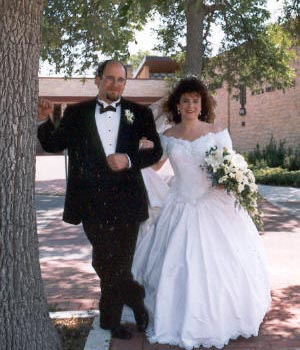 After 50 years of marriage Sheila (Rittberg) and Shom Roitenberg still hear the "music" that has been an important part of their life. Both were Winnipeg born in the heart of the north-end with Sheila living in a variety of apartments before settling into the "Baltic" block while her future husband Shom grew up on Dufferin Avenue.

Sheila was the only child of Jack and Rose (Leonoff) Rittberg. Her memories of her parents are crystal clear. Jack was a terrific father. Supportive, patient and kind are the adjectives Sheila uses to describe her father. Her only complaint was that as a travelling salesman he was away from the family too often. She is proud of her father's reputation as an honest trustworthy individual. Sheila's mother was a feisty spirited redhead who was the ever present and therefore more strict parent. She remembers her mother as the typical "stay-at-home-take-care-of-the-house" mother who was an excellent cook and had the added capacity of knowing how to "read" tea leaves. Sheila remembers her parents' social life as spending time with friends and playing cards on the weekends.

Sheila attended all the regular neighborhood schools where she both recognized the importance of an education and was also able to do well in school, however when Sheila talks about school she thinks about her singing. Starting with Machray School, Sheila performed in all school productions from elementary all the way through to university. Along the way she won competitions at the Manitoba Music Festival including the Tudor Bowl. Continuing into her adult life, Sheila performed at Rainbow Stage and at the Hollow Mug where she was also a musical director. At fourteen she joined the Shaarey Zedek choir and started a sixty-year association, which culminated in her being the choir director. In spite of her activity in the musical world Sheila had time for a social life and that is where her lifelong mate, Shom enters the picture.

Leaving a wife and two boys in Eastern Europe, Issac Roitenberg came to Winnipeg. While waiting to join her husband in Winnipeg, Issac's first wife passed away. Rose Belshansky volunteered to bring the two children (George and Joseph) to their father in Winnipeg, decided to marry Issac and together they raised the two boys and had two more children, Shom and his sister Sylvia (Cramer). Shom's memories of his parents are unmistakable. Issac was a devoutly religious man who started life in Winnipeg as a Hebrew teacher only to move on to peddling as a means of supporting his family. Friday nights however were special. Synagogue was followed by a "very" kosher meal. Issac always stressed the importance of charity and believed that the saying "charity begins at home" meant that the home is where the child learns about charity. Shom and Sheila continue to make charity an important part of their lives. Shom remembers his mother as being a beautiful woman who devoted herself to maintaining the kind of Jewish home that both she and her husband were proud of.

Shom was active in a variety of Jewish youth organizations, attended the usual north-end schools, however it was his upbringing at home with the compulsory synagogue attendance, Friday night Sabbath dinners that provided his strongest memories of his Jewishness.

Leaving school prior to graduating Shom tried his hand in the garment industry before joining the Air Force. After finishing his service Shom went back to school, graduated and then back to the garment industry where he was selected to train in New York as a union organizer. However, life has a way of getting in the way of one's plans and with his father having a heart attack Shom had to rethink his career and remained in Winnipeg.

Shom is thankful for his friends, especially the one who introduced him to his bride-to-be, Sheila. 1951 saw a Rittberg marry a Roitenberg. After a few more years in the garment industry Shom made a major career change and began work with London Life in 1954. Thirty seven years and a heart attack later, Shom decided that being first an agent and then a staff manager was enough and it was now time to slow down and do the things that he never had time to do. Today his morning is taken up first with exercise, then breakfast followed by a visit to their oldest son Kerry.

Sheila and Shom have three children. Their oldest Kerry suffered an illness that brought on a series of strokes, which caused brain damage and paralysis. Daily one or both of his parents visit their son. Their middle child Janis lives in British Columbia while their youngest child Evan practices law and lives in Winnipeg with his wife Audra. The Roitenbergs are proud of their children and how they have coped with the hand that life has dealt them.

When reflecting on their lives, Sheila would hope to be remembered for her singing and commitment to bringing music to the community. Shom wants to be remembered as a good father and husband. Sheila is quick to reassure him that no one could possibly be a better husband and father. Both are committed to the strengthening of our Jewish community and hope that its leaders always balance change so that the role of tradition is not lost.