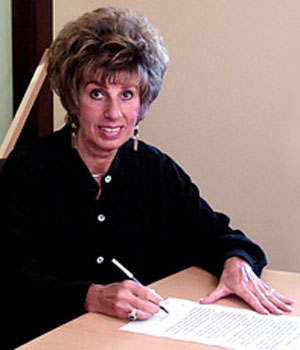 I was born on May 3, 1938 in Winnipeg and grew up on Bannerman Avenue with my parents, Samuel David Dreman and Zelda (Silverman) Dreman, and my sister Cynthia (Dreman) Brick. My father came to Canada from Poland as a teenager with his parents and eight brothers and sisters. My mother was born in Canada, one in a family of six.

I attended Luxton School and St. John's High School and then studied Fine Arts at the University of Manitoba. As a child I belonged to the YMHA. I fondly remember the many Dreman family dinners we had at my paternal grandparents' home on Magnus Avenue when I was younger and also the many back-yard picnics we had at my Auntie Rae and Uncle Joe Dreman's house on Glenwood Crescent. I was also active in the Kinneret Chapter of Hadassah.

Although I studied Fine Arts, my chosen occupation has been in retail sales. In the 1940's my mother Zelda Dreman founded Sharon's Linen and Gift Shop. I worked there with her for a few years, and then took over and moved the location to Academy Road, greatly expanding the shop. Our family owned and operated the business for over 50 years.

I met Ronald (Rube) Ganetsky while attending St. John's High School and in November, 1957 Rube and I married. We have two children, Leonard Yale who was born in 1960, and graduated from the University of Manitoba with an Electrical Engineering degree. Michele Dale, born in 1961, graduated with a Business Administration degree. Michele is married to Myles Levin, son of Archie and Bryna Levin, and they have two sons, Jeremy Michael, born in 1987, and Shaun Joshua, born in 1990. They now live in Minneapolis, Minnesota.

I hope that the Jewish population in Winnipeg increases. Now with the Campus, it would be great if the younger generation would remain and help the community grow and prosper.