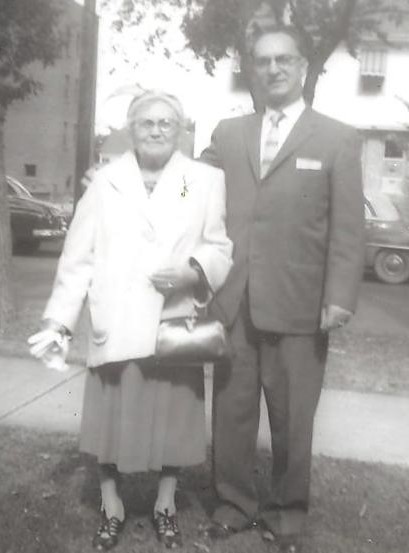 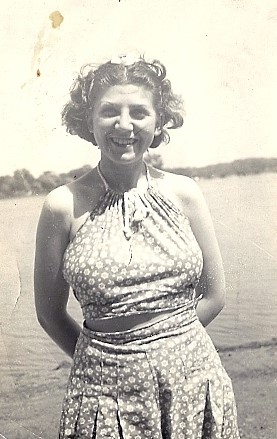 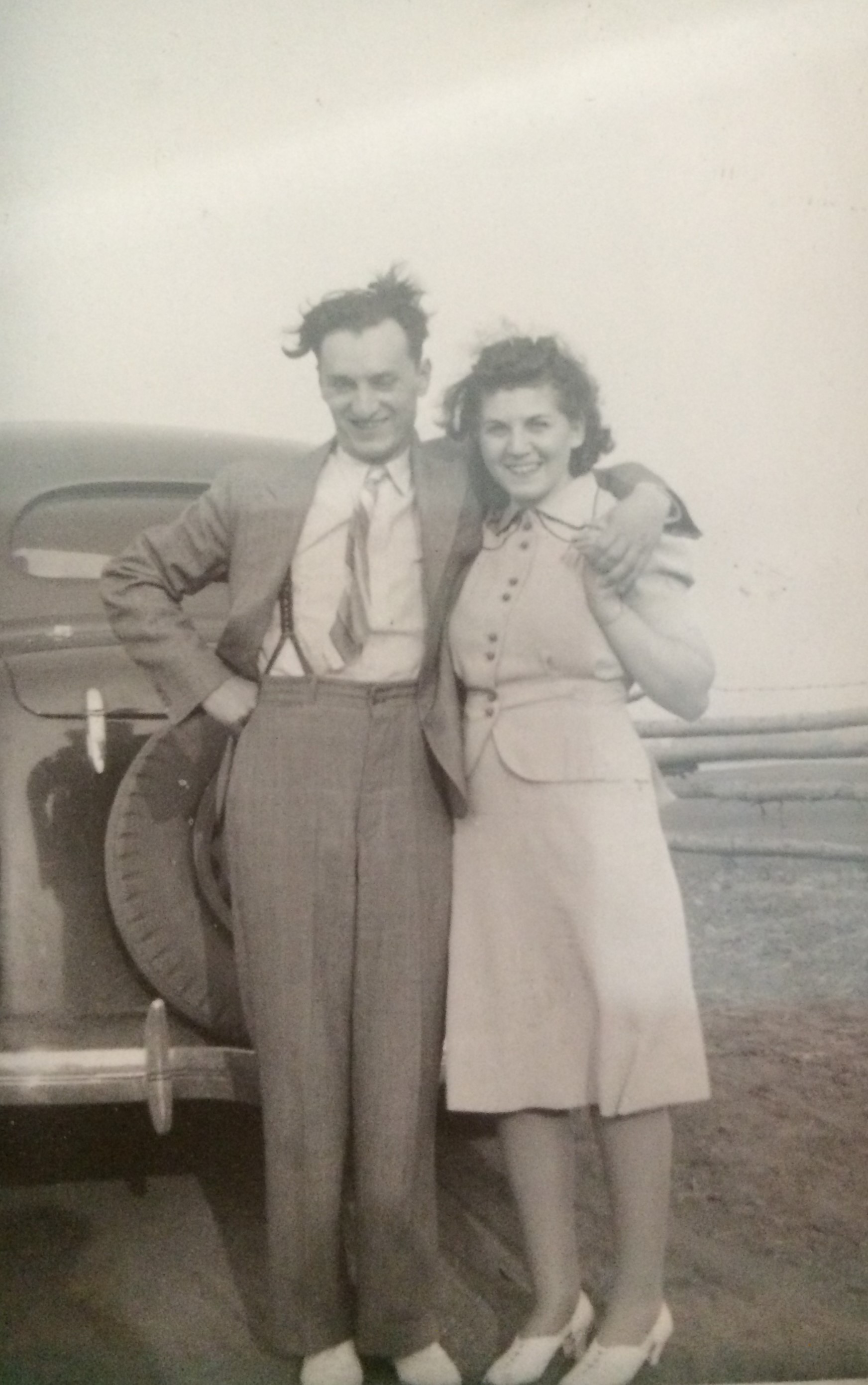 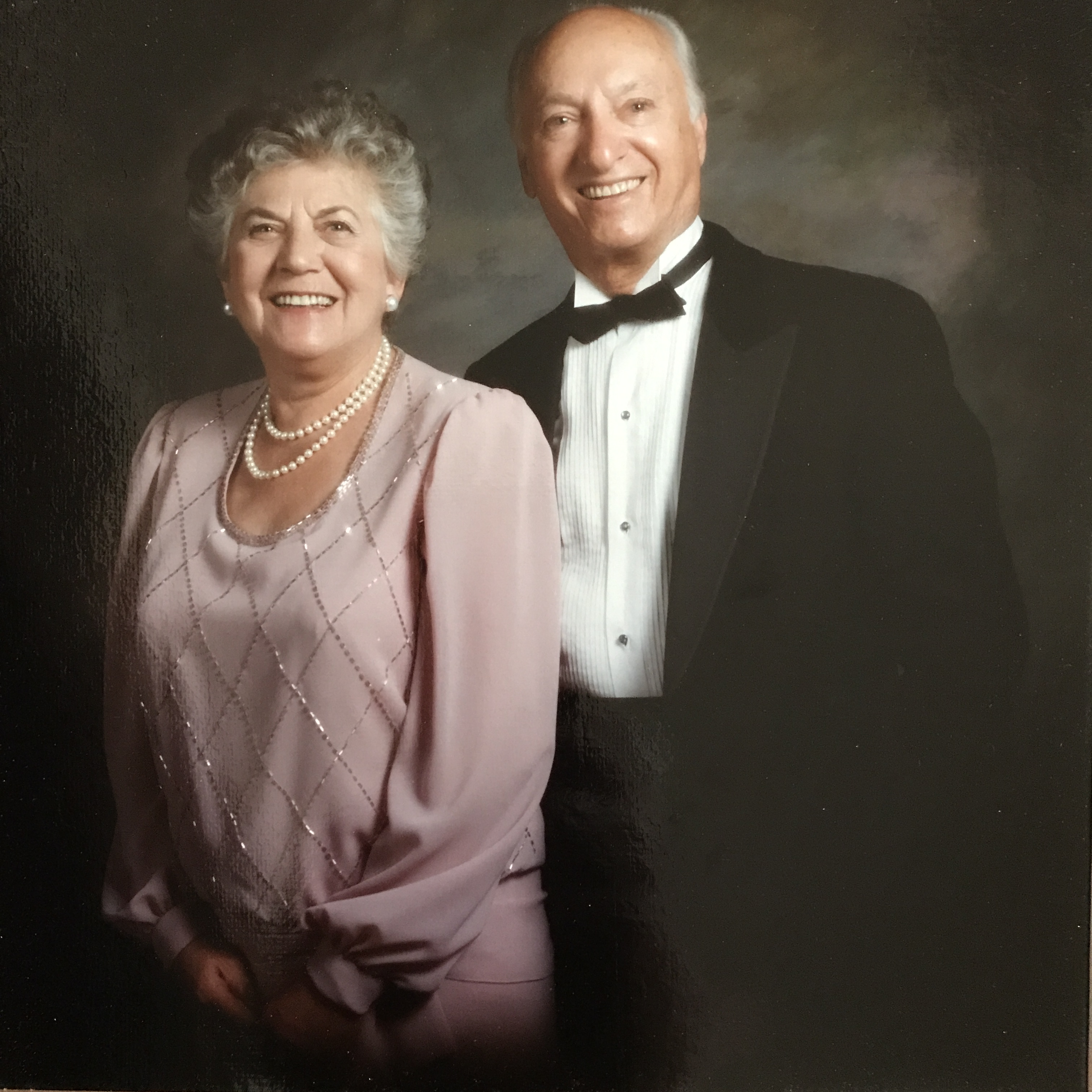 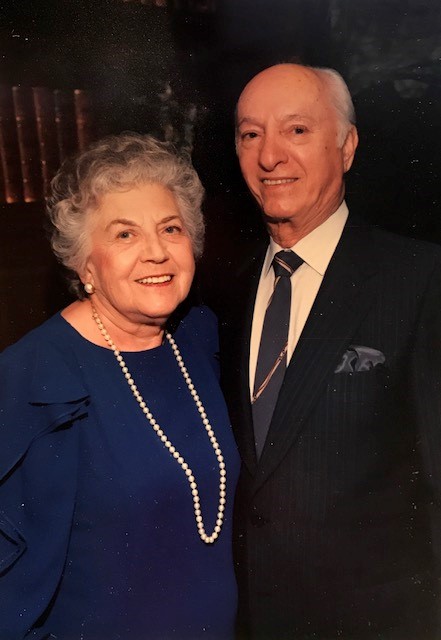 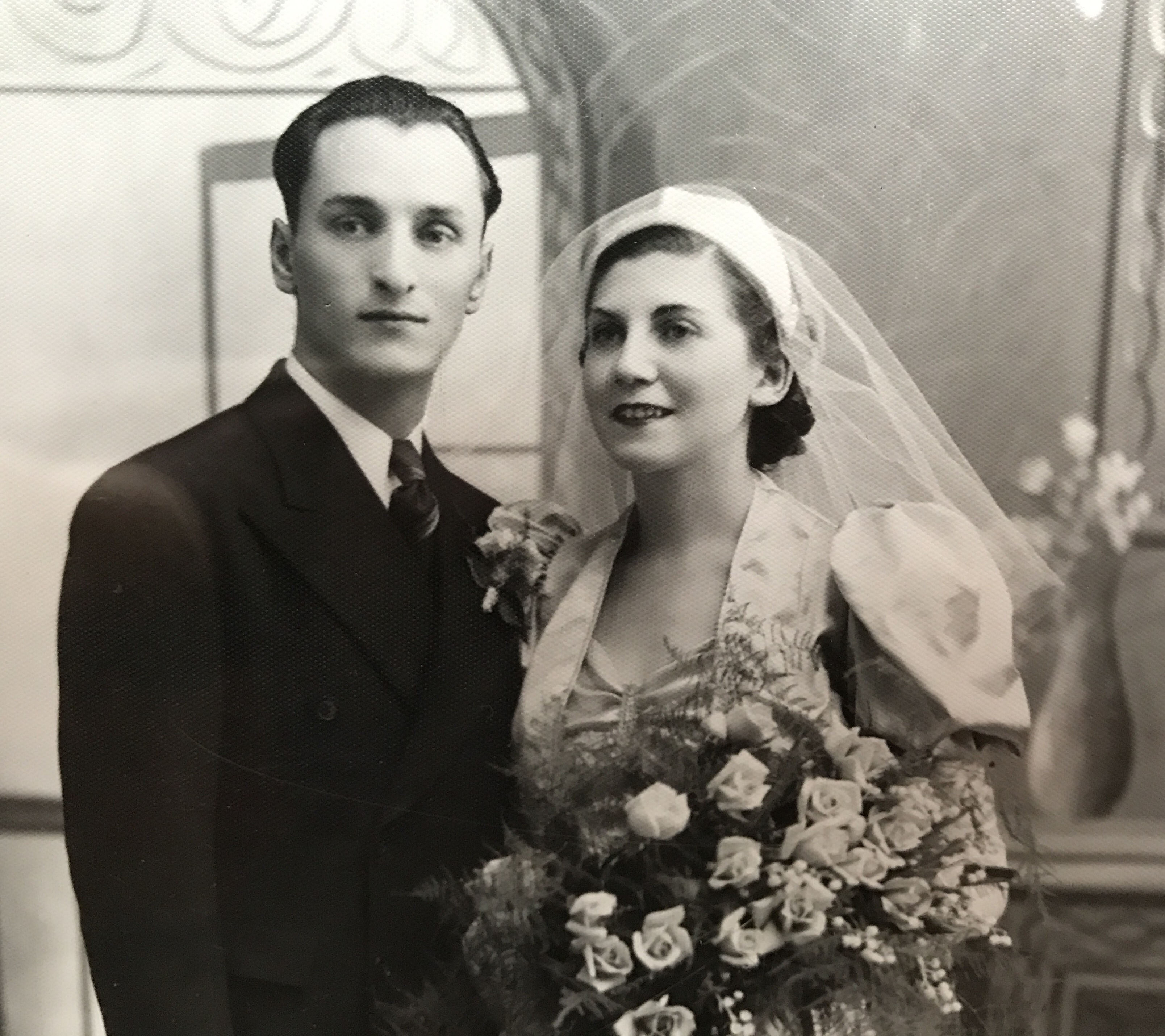 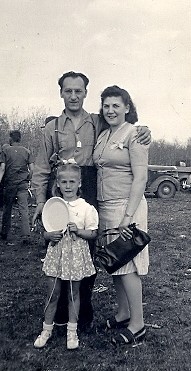 Sharon age 5 with mom and dad

Sadie Shafer and Edward Niznick were married October 15, 1938 in Winnipeg. During their marriage, they lived in small towns in Saskatchewan and Northwest Ontario, but Winnipeg was always their home and they finally moved back in 1963.

Sadie was the daughter of Yenta and Samuel Shafer from Binderi, a small town in Bessarabia (now Moldova). They immigrated to Argentina along with Yenta's brothers. Sadie was born in Buenos Aires in January 1914. Her father was unable to find work and when Sadie was 1 years old her parents moved to Winnipeg where Samuel's brother had immigrated. Three more children were born - Dave, Betty and Harvey. Times were difficult so the family moved into the living room and rented out the bedrooms. Sadie left school at age 16 to work because there was only one winter coat to be shared by Sadie, her sister and her mother and this way, her sister could wear the coat to school.

Edward was born in January 1913 in a small village Kayrena, Volynia Gubernia, Ukraine. His father Jacob became a widower with five daughters and in 1910 married his cousin Celia Kraines, sixteen years younger than he. The Canadian government promised free land in Western Canada (but not to Jews) so Jacob changed to a Ukrainian name, Niznick, and obtained land near Piney, Manitoba 90 miles from Winnipeg. In 1914 Jacob arrived in Canada with two of his daughters, Rose and Clara.

Nine months later, Jacob sent for his wife, Celia who came with the three other daughters from his previous marriage (Betty, Ida and Ann) and their two sons (Samuel and Edward), the youngest being our father. In Canada, two more sons were born (Earl and Harry). The family did not live in Piney but instead in various rented houses on Robinson and Flora in North Winnipeg. Our grandfather sold the land and opened a general store in Piney. He traveled back and forth several times a month.

When Jacob Niznick passed away on November 11, 1930, our father Edward was 16. He quit school and moved to Piney to operate the store to support the family. While living In Piney he played hockey for a Roseau Minnesota team.

Sadie and Edward were introduced on one of his trips to Winnipeg. After they were married, Edward sold the Piney store and bought a grocery store in Winnipeg along with his brother Earl. The store did not do well and in 1939 they sold that store and bought a general store in Paddockwood, Saskatchewan, 125 miles north of Saskatoon. There, Sadie and Ed participated in the community curling, socializing, and making life-long friends. All was not good in Paddockwood. The store was burned down by a man who bragged about burning the Jew's store. Although Ed hired an attorney from Prince Albert, John Diefenbaker, they were unsuccessful in bringing suit. After the fire, Ed cut windows in a warehouse owned and was back in business. Knee injuries from playing hockey kept him out of the war but he participated in the war effort by purchasing meat and dairy products for the army. Ed was a founder of the Paddockwood Credit Union, established June, 1944. His name was not put on the charter because he was Jewish. On the 50th anniversary of the credit union, the charter was amended to include his name.

In 1940 when Sadie was expecting her first child, her mother Yenta Shafer was diagnosed with cancer. To be with her in her last months, Sadie traveled to Winnipeg where Sharon was born. Ed did not see his first child until she was several months old. Gerald was born in 1943 in Prince Albert about 40 miles from Paddockwood because there was only a one room Red Cross hospital on the highway near Paddockwood.

In early 1946 Ed sold the store in Paddockwood and moved to Saskatoon while he looked for a business. In 1947 one became available in Fort Frances, Ontario. Ed and his brother Earl opened a ladies clothing and shoe store and the family lived in an apartment over the store. Once again they became a part of the community in which they lived belonging to Kiwanis, the hospital auxiliary, the golf club.

Fort Frances was a small town of 8,000 people, 240 miles from Winnipeg with six Jewish families and another nine in the surrounding small towns. Sadie and Ed's home in Fort Frances was the gathering place for the small Jewish community, where Shabbat dinners or Passover Seders were celebrated. Sadie would meet the train once a week to receive a delivery of kosher meat and chicken. Non-Jewish friends were often invited to join in the Jewish holidays. Jewish traveling salesmen frequently ate a kosher dinner at their house.

When the Rosh Pina Synagogue on Matheson Avenue in Winnipeg was established in 1952, Sadie and Ed joined and traveled with their two children for Rosh Hashanah and Yom Kippur. In 1954, at the age of 41, Sadie gave birth to twins, Judi and Joel. She often said her second family kept her young. In 1955, Gerald moved into Winnipeg to stay with family friends to study for his Bar Mitzvah. He returned home to Fort Frances for a few years. In 1958, Sharon and Gerald moved into Winnipeg, Sharon to attend university and Gerald to finish high school at West Kildonan Collegiate.

In 1963 Sadie and Ed decided to move to Winnipeg and bought a home on Mathers Bay East in River Heights. Ed continued to run the store in Fort Frances until his retirement in 1978 at the age of 65. During that period, like his father before him, he commuted from Saturday to Tuesday from Fort Frances to Winnipeg so that his family could live in a Jewish community.

Ed and Sadie's main ambition was to give their children the good education they were unable to have and they succeeded - Sharon graduated from Home Economics, Gerald from Dentistry, Judi from Interior Design and Joel from Medicine. By the time Ed retired, Sharon and Gerald and their families were living in California, Judi in Montreal, later Florida and Joel in Toronto, later Ottawa.

From that time forward Ed and Sadie enjoyed life in Winnipeg, winters in Palm Springs, and travels to visit their siblings in Canada and the US. The highlight of their travels was a trip to Argentina to see Sadie's many cousins and to Israel, a gift from their children on their 50th anniversary. But what they enjoyed most was visiting their11 grandchildren, attending every Brit, Bar and Bat Mitzvah and some college graduations.

Sadly, Ed died in a car crash in 1991 in Palm Springs. Sadie survived another five years and was able to enjoy her first great grandchild. They are lovingly remembered by all who knew them.