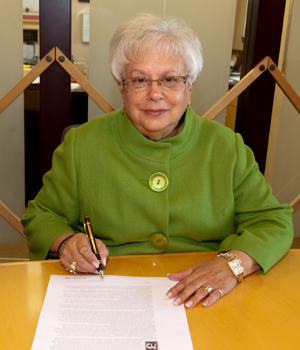 Sharon Bronstone signs her story for the Endowment Book of Life 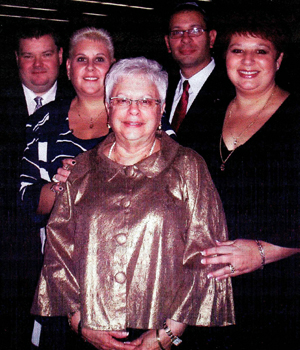 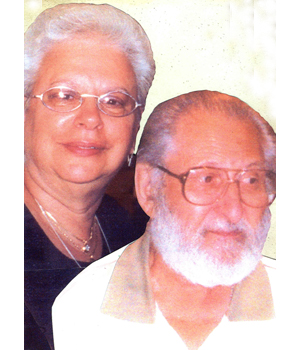 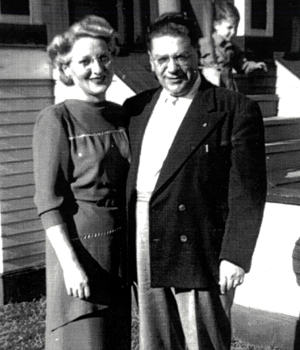 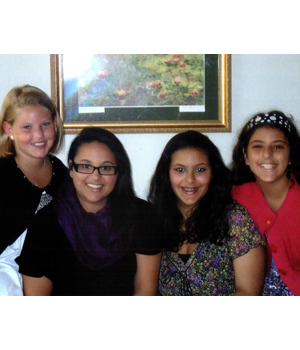 My father, Leonard Drybent (Len Bent), was born in England on June 29, 1899. My mother, Goldie Katz, was born in Lodz, Poland in 1906. Both came to Canada as children and their families settled in Vancouver. My mother worked as a salesperson at the Famous Department Store, and my father worked as a chauffeur and later owned a taxi company. They married on March 23, 1930 and had two children: my brother Nat Bent (Miriam), and 18 months later, me. I was born on February 15, 1937.

Although we belonged to an orthodox synagogue, I grew up in a conservative Jewish home. Our family was active in the Jewish community. My mother was involved in Hadassah and also in the public schools where her children attended. I went to the Vancouver Peretz Shule in the evenings and was involved in BBG, AZA, camp and synagogue. I enjoyed celebrating Jewish holidays with a close-knit extended family.

In February, 1959 I met Alan Bronstone from Winnipeg through mutual friends. Within six weeks we were engaged and seven months later, on September 6, 1959, we were married. We made our home in Winnipeg.

Alan's grandparents, Hersh and Bessie Bronstone, came to Canada in 1891 and in 1906, purchased a general store in Niverville, Manitoba. They later acquired an adjacent lumber yard. The Bronstone family was an integral part of the growth of the small village. Alan's parents, Hymie and Merle, developed the lumber yard business into Bronstone Building Supplies. They also helped found the Niverville Credit Union, and the Community Curling Rink, among many other local endeavours. Today, Bronstone Drive marks their contribution to the community.

The Bronstones had two sons, Alan and Robert (Myra). Their business eventually expanded to a second location in St. Vital and Alan ran the operation there. After the business was sold, apartments were built on the land. Bronstone Blvd., a street in the area, was named after the family. Alan was already living in Winnipeg at the time when we met.

When I came into the Bronstone family, I brought a strong Jewish identity with me. Both Alan and I got involved at the Shaarey Zedek Synagogue, Alan on the Board and I as the President of Sisterhood. Alan had his Bar Mitzvah at the age of 42. I served as President of Na'amat Winnipeg and had the privilege of going to Israel as a member of the National Board. I am a life member of Na'amat and also a life member of Hadassah.

Alan and I were proud to be the parents of three children. Linda (Filbert) was born on July 6, 1963. She has had a career as a professional singer and has owned a specialty bridal salon; she is now a wife to husband Jay, and mother to daughter Braidin. Heather (Shalom) was born on April 18, 1965. She has worked in women's retail since age 18 and is currently the manager of J. Michaels. She has three daughters, Samantha, Morgan and Or. Both Linda and Heather live in Winnipeg. Adam was born on January 1, 1969. After losing his home in Hurricane Katrina, he now lives in Jacksonville, Florida and works for the Jewish Federation of Jacksonville. He is a professor by training, and has read the Torah all over the world. He is also the lay rabbi for Shir Tikvah Synagogue in Winnipeg.

In 1978, after the business was sold, we decided to move to Israel. Unfortunately Alan's health failed and after only six weeks we returned to Winnipeg. Alan became a travel agent, a career that he thoroughly enjoyed. He loved dealing with people and facilitating their travel experiences. He bought Witman Travel and I began to work with him in the business. Alan passed away on September 12, 2005. He was much beloved and I miss him. Today, I continue to work as an "outside agent" for Platinum Travel.

Our children were raised with a strong Jewish identity. They were involved at the Saturday childrens' program at Shaarey Zedek and all three had their Bar/Bat Mitzvahs there. They were also involved with USY. They attended Ramah School and Talmud Torah. I have always volunteered with whatever my children have been involved with, so served as President of the PTA's both at Ramah and Talmud Torah. I now volunteer at Gray Academy where my grandchildren attend.

I have been involved with Folklorama for 40 years — right from the start. I served as President of Folklorama and am the Past Chair of the Israeli Pavilion. I, my children, and a grandchild have all been ambassadors. I became involved because I believe in what the event is all about — promoting multi-culturalism and learning from others' heritage and ethnic traditions. It was an extension of the philosophy in our home of treating others with respect and that no one is better than you, or less than you.

I was President of Beth Israel Synagogue and involved with the amalgamation of the three synagogues. I have enjoyed participating in the establishment of Shir Tikvah where, in leadership together with a small group, I currently serve as President.

I am pleased that my grandchildren can grow up in this community. I think the Campus is a fantastic facility and love the fact that Jewish education is offered from kindergarten through Grade 12. My commitment to the Jewish Foundation of Manitoba comes with the hope that the community will continue to thrive and flourish and be a welcoming home to many.