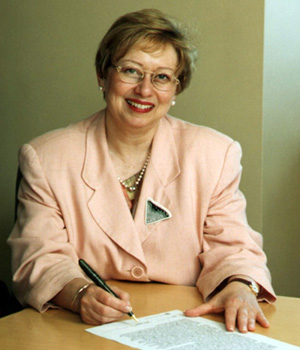 I was born in Winnipeg in 1947, and grew up with my two sisters, Elaine (Goldstine) and Marilyn (Raber) in the north end and then in River Heights. I attended public school during the day and the Talmud Torah and Herzlia night schools. At Herzlia I was a member of the first graduating class. I was also active in BBYO and Hillel. After high school I worked as a librarian at the Misericordia Hospital for 26 years. Currently I work for Transport Canada where I am responsible for the regional library and 5 small libraries.

My parents, Ben and Sadie Raber, taught me by example about the importance of being involved in community life. While they both canvassed for the CJA, my mother was also active with the Brandeis Ladies Lodge Auxiliary and National Council of Jewish Women. For 20 years now I too have worked on behalf of the NCJW, serving in a variety of capacities on the local board and also at the national level. I served as National Vice-President from 1992-94 and as President, Winnipeg Section, from 1995-97 and 1999-2000. I also serve on the board of the Gwen Secter Creative Living Centre, the WJCC and the Jewish Federation's Budget & Allocations Committee, and have served in the past on the board of the Shaarey Zedek and as president of the Manitoba Health Libraries Association.

My maternal grandmother, Ida Pinsk (nee Greenspan), was a strong woman who emigrated from Russia alone when she refused to accept the match that had been made for her. She eventually married my grandfather, Sam Pinsk, and settled with him in Regina where my mother Sadie and her six siblings were born.

My father Ben Raber emigrated from Poland as a baby with his parents, Sam and Liba, and two brothers. His sister Anne was born here. Ben graduated from St. John's High School and then served in the Air Force as an airplane mechanic. He met my mother in Regina and they married in 1944. After World War II my father studied clothing design in New York, worked for clothing manufacturers in Winnipeg and then opened Raber Togs in 1960. My parents successfully operated this business until they sold it in 1985.I have made this commitment to the Endowment Book of Life for several reasons. While it gives me personal satisfaction to do so, it also sets an example for my children, Adam, who was born in 1978 and is currently finishing his honours degree in anthropology, and Sarah, who was born in 1983 and now attends Kelvin High School. My contribution also helps support community services and organizations, and, I hope, will also ensure that the community and the campus will remain vibrant and active so that my children can continue to benefit from them for years to come.