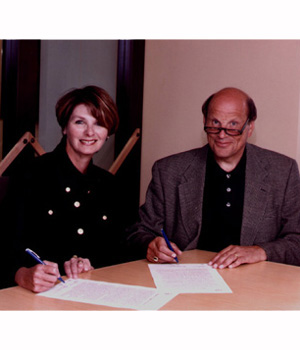 For most of early life and into adulthood, I was blessed and privileged to be surrounded by two sets of grandparents and by my maternal great-grandparents, Avrum and Chana Klein, who came to Canada from Russia. My maternal grandparents, Fred and Dora Winegratsky, came to this country from Russia as small children. My grandfather's family came as farmers to the Bendor-Hamlet Colony. My paternal grandparents, Joseph and Fanny Klapman came to Chicago from Poland and the Ukraine, but in 1917, they moved to Canora, Saskatchewan, to open a kosher butcher shop. They moved to Winnipeg in 1924, when my father was 10 months old.

My parents, Rita and Mickey Klapman, were both born in Canada. My father was involved in the knitwear manufacturing business. My two sisters and I grew up on Matheson Avenue in Winnipeg's North End. I attended Victory and H.C. Avery Elementary School, Talmud Torah Night School, Edmund Partridge Junior High, West Kildonan Collegiate and United College. During these years I was a member of the Y.M.H.A., U.S.Y. and B.B.Y.O. I had great fun during my teenage years as the Y's dances and clubs, and at Winnipeg Beach in the summers with all my family - aunts, uncles, cousins, and grandparents too! I warmly recall going to the Eretz Israel Shul on Magnus and Powers. My "Jewishness" was thus firmly established.

I chose to be a homemaker, and I always think that my best achievement was the man I married, Hymie, and the two talented and fine children we have raised, Tannis and Josh. In addition, I worked as a part-time model and fashion show coordinator, and was also very active as a volunteer.

I am a 25 year active Life Member of Hadassah-Wizo, served twelve years on the National Executive, and a three year term as Council President. I have also served on the Boards of the Talmud Torah, Joseph Wolinsky Collegiate, Jewish Child & Family Service, the St. Boniface Research Foundation and The Jewish Foundation of Manitoba . For two two-year terms I have been the Chair of the Foundation's Women's Endowment Fund.

When people hear my name I think they will know that I was totally devoted to my husband and children, that together Hymie and I raised two terrific children, instilling in them a solid traditional Jewish background and a sense of family, community, and "menshlachkeit" . I have grown as an individual through my volunteer work, and I hope that I have made a valuable contribution to the Jewish Community and the wider community.

I make this commitment to the Jewish Foundation of Manitoba through the Endowment Book of Life because I have seen personally the importance of this legacy - past, present, and future.