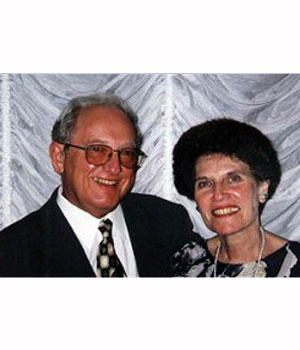 My family's roots were in Russia (Kiev, Odessa), they settled in Winnipeg at the turn of the century. In the Minutes Book of the Rosh Pina Synagogue, dated 1898, my great-grandfather, Menachem Mozersky, is listed as one of those present. Hershel and Hinda (Schwartz) Mozersky, my paternal grandparents, were married in New York in 1907 and followed their family to Winnipeg in 1911. My maternal grandparents, David and Faiga (Gvinter) Soudack, were married in Winnipeg in 1914.

My parents, Lillian (Soudack) and Myer Mozersky were married here in 1936, and established their family residence in West Kildonan. I grew up with a brother, Ken, and "the Mozersky twins", Dan and Ruthie, all of whom have left Winnipeg to pursue educational and other goals. Embedded permanently in my memory are the celebration of Shabbat and Chagim at my maternal grandparents' home. The family's strong attachment and dedication to Zionism and Yiddishkeit also profoundly influenced me.

My Jewish education at Peretz School, affiliation with Habonim, especially participation in 1954 for a year at a Habonim workshop in Israel, involvement with Hillel, activities at the YMHA, and my work with the Student Zionist Organization provided me with very positive feelings about being Jewish and with pride in the Winnipeg Jewish Community. I graduated as a teacher and have used that training in my varied volunteer work in the community. I served as the Chair of the Board of Education of the Talmud Torah and Joseph Wolinsky Collegiate.

Much of my volunteer time was dedicated to the Combined Jewish Appeal, serving as Chair of the Women's Division, Chair of the entire Campaign, and serving on various Committees at the national level. I was very proud and honored to receive the Max Nathanson Young Leadership Award in 1977. My involvement is the natural outgrowth of the example set by my grandparents and parents, and of the vibrant Jewish organization and institutions of Winnipeg's North end.

I am married to Benjamin Goldberg and we have three children: Harold (Alisa), Martin (Sharon) and Elana (Myron Schultz). They have gifted us with seven wonderful grandchildren. Benny and I have been touched by our relationship with our parents and grandparents, and are very aware of being the link into the lives of our children and grandchildren.

I hope that we have set a true path, that our example will make meaningful this continuity from generation to generation and thus help to ensure the viability of the Winnipeg Jewish Community well into the new century.