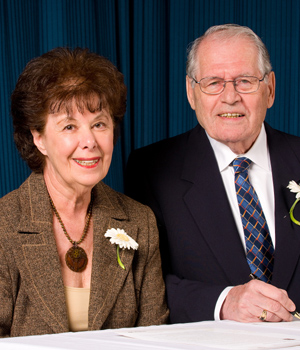 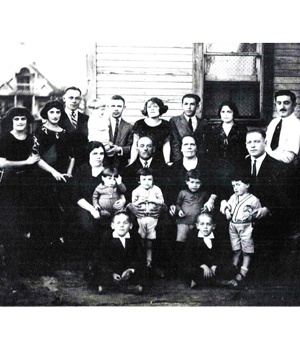 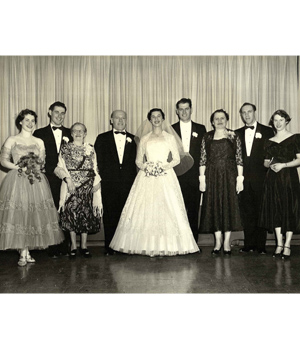 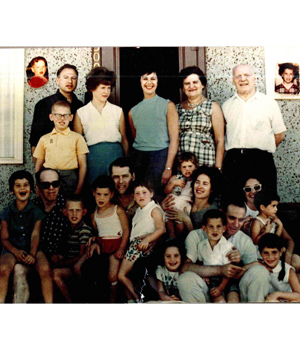 The Smordin Family in the early 1960's 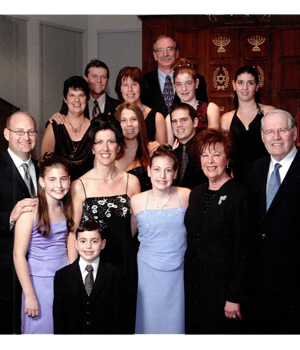 Selma Sinaisky was born in Winnipeg on March 29, 1933. Her mother, Dena, was also born in Winnipeg, the daughter of Faiga (Shnier) and David Rusen. Selma's father, Allan, was born in Russia and came to Canada at the age of six months with his parents, Malka (Karlinsky) and Harry Sinaisky, and two brothers. Dena and Allan met when she was only 15 and they married eight years later in August of 1930. Allan worked for Manitoba Tent and Awning.

Selma's childhood revolved around the Balfouria Apartments on Cathedral Avenue in Winnipeg's north end with her family and beloved brother Marty, of blessed memory. Many of her relatives on both sides of her family lived in the same block and this made for a warm, secure, fun environment with "dozens of cousins" and many friends. In fact, Selma is still best friends with Ruth Bass, whom she met at age three! The "Gabalots", a group of girlfriends that began in Grade 6, are still connected to this day.

Selma attended Champlain, Machray and St. John's Tech. When her family moved to Brock Street when Selma was 15, she continued to live and attend school in the north end. She then attended United College and, for one year, University of Manitoba. She worked as a dental assistant until a year after her marriage to Harold Smordin.

Harold Smordin was born in Winnipeg in 1926. His mother, Ethel Corman was also Manitoba-born, in 1901. His father, Louis Smordin, was born in Russia in 1899. Ethel and Louis married in the early 1920's in Winnipeg, and had four children: Shelby, Harold, Stan and Phyllis. The Smordins placed a high value on education and they would be proud that not only did their four children graduate from university, but all twelve of their grandchildren are also university graduates.

As a child, Harold's family moved from place to place and he attended six different schools. His parents eventually settled in Edmonton for their retirement years. Harold left home at age 16 to pursue his education. He attended the University of Saskatchewan and the University of Manitoba. At the time, veterans returning from the war got first selection of courses. Harold wanted to pursue a career as a Chartered Accountant but the office he was required to work at was consistently full. In his third year of university he got a break when a veteran articling with Schacter Gilman withdrew and Harold was able to take his place. Harold graduated as a Chartered Accountant in 1956 and worked both in private and public practice until his retirement in 1992.

Harold and Selma were married on December 28, 1954. They were blessed with three wonderful daughters. All three girls attended Montrose, River Heights and Grant Park schools, and did their post-high school education in Manitoba. Daughter Marcy graduated from the nursing program at Health Sciences Centre and works as the operating room supervisor at Shouldice Hospital in Toronto, Ontario. She is married to Richard Allison, and they have two children, James and Leigh Beth. Daughter Susan is a school teacher at Brock Corydon. She is married to Arnold Pereles and they have two children, Deanna and Adrienne. Daughter Jill is Professor of Occupational Therapy at the University of Toronto. She is married to Ron Stier and they have three children, Carly, Tara and Adam. Family is a priority for Harold and Selma and they are very committed to connecting with their family. Their children and grandchildren are a delight to them and they appreciate all of the warm and special family moments they spend together.

Both Harold and Selma are long-time community volunteers and they have modeled this value for their children. Selma has been involved at Montrose School for 42 years since both her children and grandchildren have attended there! When her children were younger, she got them involved in the "adopt-a-friend" program at the Portage la Prairie Home for the Mentally Challenged. She worked with the Shaarey Zedek Sisterhood and is a lifetime member of Hadassah. For the last 20 years, she has been a volunteer reader for the Canadian National Institute for the Blind, helping with the narration and production of audio books. She loves to help plan reunions, and wrote the script for skits at the St. John's Tech reunion and the YMHA reunion.

Harold and Selma have been members at the Shaarey Zedek Synagogue for 54 years. Harold has served as the Chesed Shel Emes representative for over 20 years. He chaired the Shaarey Zedek Synagogue Cemetery Committee for four years, served as Vice President on the Chesed Shel Emes Board, served as Finance Chair for several years, and is currently a Life Member of the Board. Even in retirement, volunteerism has kept him busy. He served on the Finance Board of Creative Retirement Manitoba and has found volunteer work with CESO (Canadian Executive Service Organization) particularly satisfying. With CESO, he has helped aboriginal groups in Manitoba, Saskatchewan and Ontario by holding budgeting seminars, training bookkeepers, and teaching finance and business skills.

The Endowment Book of Life holds the stories of many extraordinary citizens. With a shared life marked by the values of family, education and community, Selma and Harold Smordin are, quietly, among them.