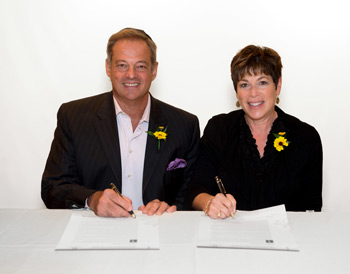 Selma Gilfix signs her story for the Endowment Book of Life

Our Jewish community has touched my life for many years, and in many ways. I am proud to be able to reflect on my life and participate in the Endowment Book of Life program as a way to help ensure a vibrant future for our community and its institutions.

I was born in Winnipeg in 1955 to Max and Molly (née Albert) Pressman, two wonderful, caring, and modest people.

My mother, who passed away in January 2013 at the age of 81, was the daughter of Mirel and David Albert, who came to Canada from Poland in the early 1900s. My grandparents originally settled in Winnipeg, where my mother was born, but then moved to Saskatoon where my grandfather worked as a shochet. When he died, my grandmother returned to Winnipeg with my mother and her brother, Sam. My grandmother, with the help of her kids, owned and operated a grocery store on Jarvis Avenue. My mother was a fabulous baker and cook, often hosting up to 30 people for holiday and Sunday dinners. She was an active volunteer with Na'amat, Pioneer Women, and the Talmud Torah PTA, and was my father's business partner at the family's music store, Sam the Record Man. She had boundless energy.

At the time of writing, my father is an 89-year-old resident of The Saul & Claribel Simkin Centre. Still charming and sweet, and still a great fan of Jewish music. His parents were Harry and Kayla Pressman, who came to Winnipeg from Russia around 1910. They farmed in Camper, Manitoba, and, as a widower, my Zaida lived with us for a few years in our basement on Marigold Bay. My dad farmed until he was almost 50, commuting daily from our home in Winnipeg to the farm in Grosse Isle and back. After farming, he worked as a small-appliance repairman for a short time before opening Sam the Record Man with my mom at Garden City and Unicity shopping centres.

My parents met as singers in the Rosh Pina Choir and got married in 1953. My father was a tenor in the choir for 50 years! (I later joined the choir, too!) My parents provided a beautiful, albeit modest, upbringing for me, my sister, Faye, and my brother, David. We took regular summer trips to Gimli, had occasional outings in Winnipeg Beach, and enjoyed having Jewish holidays together. I lived on Marigold Bay until I was 16, when my parents sold the house and car to finance their new record store, and we moved into a side-by-side on Hartford Avenue.

I attended Talmud Torah and graduated from Joseph Wolinsky Collegiate. I played basketball at JWC and joined BBYO for a year. I was an active member of the Rosh Pina Choir, starting in the Junior Choir at the age of 11 and finishing in the Senior Choir in my late 30s. Today, I'm with the High Holiday Choir that sings at The Saul & Claribel Simkin Centre. It is an honour to participate in those services.

After high school, I went to the Health Sciences Centre to study nursing and graduated as a Registered Nurse in 1975. I worked as a post-op pediatric nurse at Children's Hospital. Although I retired officially in 2011, I still do occasional shift work. I love nursing work — it's something I always wanted to do, since my days as a young candy striper at Misericordia.

In 1972, I met Murray Gilfix, the man who became my husband, at a Sadie Hawkins skating party after which everyone went back to Rabbi Shalom Rappaport's house. I had never met Murray before and he was actually at the party with another girl.

Murray called me a few days later for a date. We started going out and we got married in 1976. We have two sons: Daniel, born in 1980, who lives in Victoria; and Greg, born in 1984, who lives in Winnipeg. We provided our children with a Jewish education and summer camping experiences at BB Camp. We went skiing, golfing, and played tennis together, spent Jewish holidays with our parents and families, and enjoyed visiting relatives in Alberta. We believe very much in nurturing family relationships. Today, Murray and I never miss a family simcha, no matter where it is.

We are proud of the family we built and we both feel very committed to making the Jewish community as strong, effective, and compassionate as possible. My primary volunteer work at the time of writing is with the Simkin Centre where I sit on the Board and chair the Simkin Stroll and the Spiritual Care/Jewish Values Committees (along with my choir work, of course!).I'm committed to the Centre, not only because of the care my mother received and my father continues to receive, but also because I believe in the Centre's importance in the community. I care deeply about its success.

I have also been involved with the Israel Pavilion at Folklorama for many years. I co-chaired the pavilion for two years, and Murray and I have co-chaired the bar and admissions. Murray is still in charge of admissions, and I still like to help out when I'm needed.

We believe in being active and optimistic, committed and hard-working. These are essential values for us — values that reflect the essence of what our community and the Endowment Book of Life are all about.