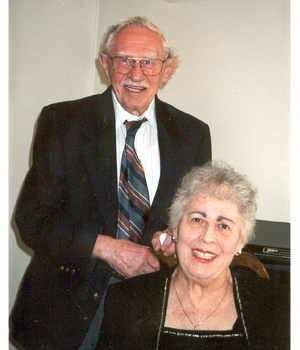 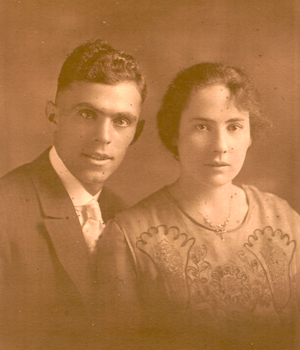 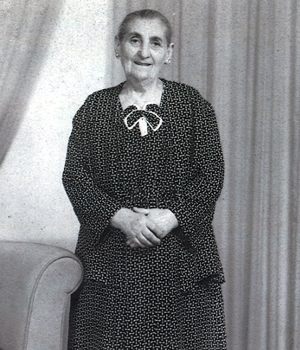 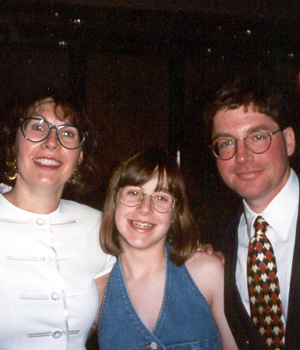 Sara's youngest daughter Susan Permut with her husband Arnold and daughter Janie on the day of Janie's Bat Mitzvah, May 1995 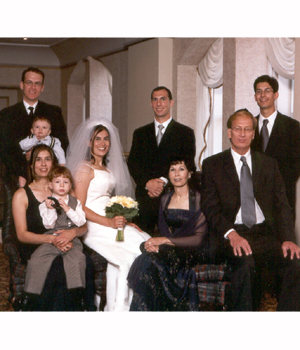 The music that has been heard for the past forty-five years flowing through the Sharon Home, various Winnipeg synagogues and at countless birthday parties started in Rockyford, Alberta. This was the first real home for Sara Hochman. It was in Rockyford, a town of three Jewish families that Sara grew up and received her musical training.

Sara was one of four children, one boy, Louis and three girls, Annette, Rosetta and Sara, born to Samuel and Cecilia Davis. One parent from Russia, the other from Romania, Sara speaks of how a business opportunity attracted her now married parents to settle in small town Alberta. Running a horse and wagon transfer business, Samuel traded his transportation services for Sara's musical lessons from the local convent. Sara beams with pride as she recalls the Mother Superior's comments that Sara was a gifted musician.

Sara attended public school and participated in the general community but still grew up with a true sense of being Jewish. Through the efforts of her mother, who always maintained a kosher home, and her grandmother, Miriam Levant, who was a great influence on Sara, she never felt that her religious identification was in jeopardy. Sara credits her grandmother for teaching her how to be both "careful and caring". These are characteristics that she hopes have guided her life.

First her grandmother and eventually Sara's immediate family left Rockyford for the bright lights of Calgary. Arriving in Calgary as a teenager Sara graduated from high school and Business College and then began a working career in a medical office. When speaking about the move to Calgary, Sara recalls that her only apprehension was for the safety of the piano that her grandmother and father secretly saved to buy for her. Sara proudly plays that same piano today.

It was in Calgary that Sara experienced her first involvement with Jewish organizations as she became a member of Hadassah. How was she to know that this commitment to the Jewish community was to last a life-time. Circumstances and opportunity led Sara to Winnipeg in 1949. Not surprisingly she quickly made friends, found a place to live, a place to work and an active social life. It was on a blind date that she met her future husband Sam Hochman. A whirlwind courtship was followed by marriage in 1950 and two daughters, Marcy and Susan, two sons-in-law, Barry and Arnold, four grandchildren, Cara, Jill, Hart and Janie and two great grandchildren, so far.

Sara feels that she has been lucky in life. Upon arriving in Winnipeg in June 1949 she met what proved to be lifelong friends. She became a volunteer at what was then known as the Western Canada Jewish Home for the Aged. This relationship is still ongoing and Sara credits it for keeping her young. Honoured in 1999 for her years of dedicated volunteerism, Sara feels that she has received more than she has given. Next to her family commitments, she feels a "positive addiction" to provide music to the elderly.

"The others can take care of themselves", states Sara when asked to explain her emphasis on the young and the old as the focus of her volunteering life. With additional consideration Sara would encourage others "to give of yourself, it's very rewarding" and also "to give to those who are worthy," it makes you a better judge of people.

Sara's participation in the Endowment Book of Life program allows her to record her history, provide insight to her philosophy of life and to acknowledge that the Winnipeg Jewish Community is an especially caring one that needs to be maintained financially strong so that it can continue to provide the same degree of human warmth that she encountered when she first arrived here.