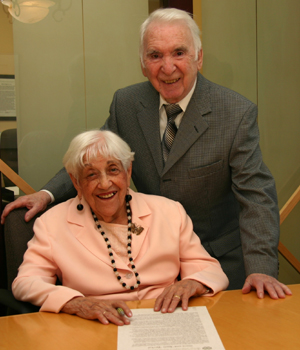 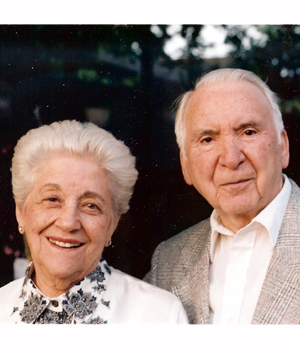 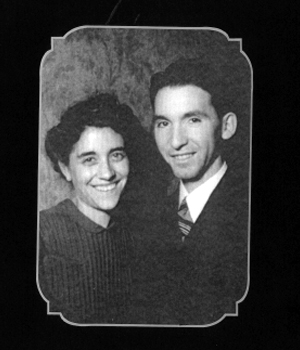 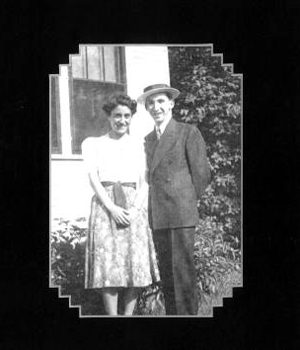 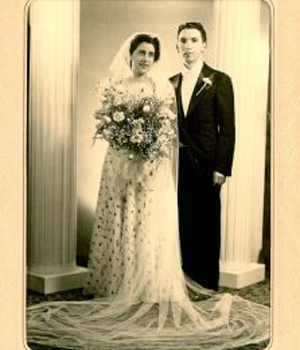 Sara and Louis Berkal on their wedding day

Sara and Louis Berkal are an extremely fortunate couple. At ages 89 and 92 respectively they continue to live in their River Heights home, and enjoy outings, the pursuit of hobbies, and the company of their children, grandchildren, and most importantly, of one another. After 67 years of marriage in July 2006, Sara still refers to Louis, or "Lapidus" as 'one in a million' and he still manages to make her laugh several times a day.

Sara and Louis met when her father invited Louis, Grand Forks' new Rabbi, home for Shabbat dinner. Sara, 21 at the time, recalls liking him immediately. They married a year later.

Sara and her three siblings, Ben, Mildred and Rebecca, were born and raised in Grand Forks, North Dakota where her parents, Eastern European immigrants Harry and Betty Ginsberg, had settled. She recalls a happy childhood guided by her wonderful mother, and a vibrant Jewish community of about 100 families. She did not experience any anti-Semitism, and remains an American citizen to this day.

Harry worked in the fur and junk business and with his brothers was among the early builders of the city. He was an extremely pious and traditional man, and was very involved in the orthodox shul in town. He found the young Winnipeg Rabbi a little too modern for his tastes, even if he was his son-in-law, while Louis found the work from the pulpit to be both rewarding and challenging. He prepared and read Torah every Sabbath, wrote sermons, taught Hebrew school, tutored Bar and Bat Mitzvah students, and regularly visited the sick. In hoping to attract more modern families to synagogue, he introduced the novel idea of a Friday night service.

Louis received his formal Rabbinical training from Rabbi Kahanovitch, the Winnipeg-based chief Rabbi of Western Canada. Louis lived in Winnipeg from the age of 14, when he emigrated from Lithuania with his father, Simon, step-mother, Hanna, and siblings Bella, Sammy and Morris. The family was sponsored by Louis' older siblings Abe and Doris. Louis' mother, Sarah, had died when Louis was just an infant. He fondly recalls a quiet and idyllic childhood growing up in the Lithuanian shtetl of Ushpol.

In Winnipeg the family lived on Aberdeen Street. Simon worked as a shochet, and Louis attended Talmud Torah, Strathcona and Faraday schools, and sang in Cantor Brownstone's choir. He completed his studies with Rabbi Kahanovitch and moved to Grand Forks in 1937, where he studied music at the University of North Dakota.

Sixteen years later Louis accepted the position of Rabbi and Cantor at Winnipeg's new Shaarey Zedek Synagogue. Although Sara was unhappy to leave her hometown and her family, she adjusted to Winnipeg life and found the community very welcoming. She became involved in the synagogue sisterhood and says that she never found it difficult being a Rabbi's wife. Louis devoted countless hours to the fledgling synagogue, increasingly shifting his focus to Conservative Judaism in order to keep up with the changing times. He even acknowledged that the style of Sabbath observance could be a matter of interpretation. Nonetheless, he now expresses concern that in recent times, Jewish identity has become much more social than spiritual, and wonders whether or not this new identity will be enough to sustain the Jewish religion.

Louis continued working at the synagogue full time until the age of 86, retiring only recently. He has managed to keep busy in retirement. He still loves to sing, describing cantorial music as 'something that comes from the heart and soul.' Once a week he goes into his son-in-law's office to help out, and he takes violin lessons, which Sara enjoys sitting in on. She too discovered a new hobby in her golden years and now spends hours each week painting landscapes, children and pets on canvases that clearly reflect an obvious hidden talent.

Both Sara and Louis trust that they have been good and devoted parents and role models to their children, Allen, Ben, Harvey and Harriet, and to their in-laws and nine grandchildren. They hope that they taught them by example to value education, to be honest, and not to get upset over unimportant matters. They hope too that they will be remembered as good human beings.