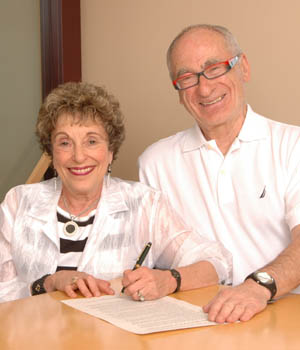 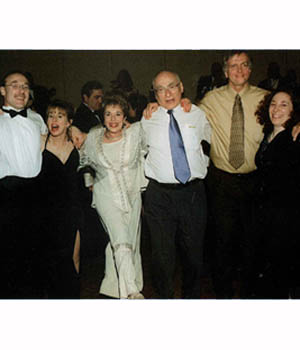 L to R Shayne and Michele, Sandra and Ozzie, Mike and Rhea 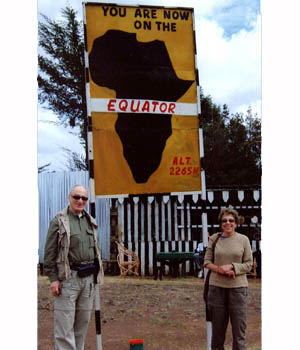 The Ploskers at the equator 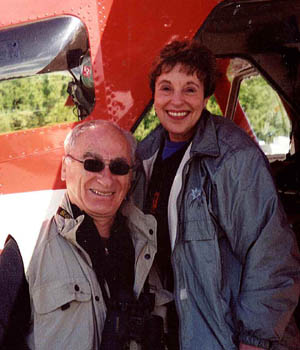 Sandra and Ozzie in Alaska 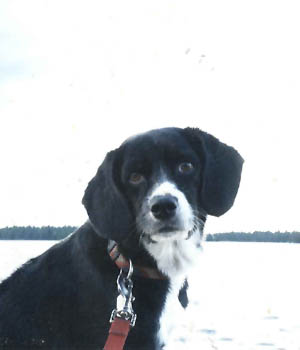 Early in their marriage, Sandra and Irvin Plosker chose to take the 'road less traveled.' In the process, they gained a great appreciation of small town life and the outdoors, while blossoming both individually and as a couple. Recently resettling in Winnipeg after 42 years in Kenora, they are reconnecting with old friends, rediscovering the city of their youth and rejoicing in the achievements of the Jewish community.

Sandra and her younger sister Carole Fainman were raised in the north end by their parents, the Romanian born Sophie and the Winnipeg born Harry. Their maternal grandparents Riva and Mendel Trachtenberg also lived with them.

Harry worked for a dry goods wholesale and sold shoes at Oretsky's on the weekend. He was a hard working man who was very devoted to his family. He used to pace up and down the street until Sandra came home at night when she was a teenager. Sophie worked in ladies wear and was one of the first employees at Sears when Polo Park Shopping Centre opened. Widowed when she was in her early fifties, she twice remarried and now resides in the Sharon Home.

The family lived on Burrows, moving to Bannerman when Sandra was seven. She attended Machray School and St. John's Tech, and was active at the Y and with Young Judea and Habonim. She worked weekends at Oretsky's and, later, at the SAAN stores, at Fort Osborne Barracks - where, at the age of 16 she learned to smoke and drink coffee, and at Winnipeg Electric. She attended the I.L. Peretz night school, and had non-Jewish friends but only dated Jewish boys.

Sandra was introduced to Irvin (Ozzie) through a mutual friend. She was 18 at the time and he was 25 and employed at Kromar Printers.

Irvin was born in Toronto in 1931, but moved to Winnipeg a year later. His mother Anne (Plosker), from Rovno, Poland, had married her uncle, Menachem Mendel. Menachem did not work very much and was not involved in his family's life. Anne was a very proud and independent woman who said she would rather starve than go on welfare. She worked at Weston Bakery and then Canada Western Shoes, and took pride in the fact that Irvin's friends liked to hang out at her home even though their families were all better off financially.

Irvin had a younger sister, Belle Daiter, who passed away in 2004, and a mentally challenged younger brother, Morris. He passed away at the age of 47 after living in Portage la Prairie from the age of 12. Irvin's uncles Hershel and Joe were both good to the family and provided Irvin with positive role models.

When Anne took ill and was hospitalized for two years, her children lived at the Jewish Orphanage. This gave Irvin the opportunity to transfer from Strathcona School, where he got beat up for being Jewish, to Luxton School, where most of the kids were Jewish. He made many more Jewish friends when he took Bar Mitzvah lessons and joined the Y.

As a young adult, Irvin worked as a CPR newsagent and won a lot of money gambling, before becoming an apprentice printer. He moved to Kenora in the fall of 1957 when his sister's in-laws asked him and his mother to join their family business, Daiter's Motel and Cabins. Sandra joined him there the following March after they were married, excited for the experience and confident that life in Kenora would be good for them. Eventually, Irvin's sister, brother-in-law and mother returned to Winnipeg, and Irvin and Sandra took over the hotel.

Over many years of hard work and both good and bad seasons, they expanded the hotel and embedded themselves in the Kenora community. They were the first to construct an outdoor pool in a local hotel and, years later, put in the largest indoor hotel pool in Northwestern Ontario. Irvin was active with the Chamber of Commerce, the Kenora Tourism Board and the Publicity Board, and on occasion did sense some anti-Semitism. He was instrumental in lobbying for B'nai B'rith Camp to be allowed to use Town Island.

As busy as they were, Irvin and Sandra always made time for their children, Shayne (wife Michele) who is a reproductive endocrinologist at Brown University in Providence Rhode Island, and Rhea, (husband Mike) who lives in Toronto and works as an industrial engineer. Shayne visits Kenora often where Sandra and Irvin still have a cottage. Their third child, Noie (cocker spaniel/terrier) has four legs and has provided them with fourteen years of endless joy.

Years before returning to Winnipeg, Irvin took up yoga and is now an instructor. Sandra, who was more reluctant to leave Kenora, stays active through aerobics and is a fragrance demonstrator. As a couple they continue to travel to exotic locales such as Africa, New Zealand, Israel and of course, Kenora, Ontario.