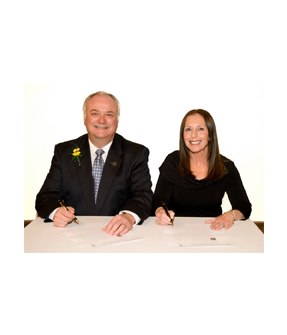 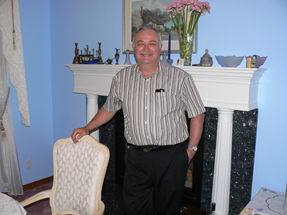 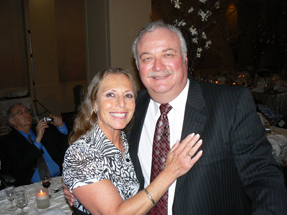 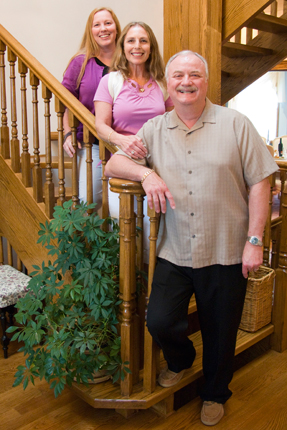 (Top to bottom) Our daughter Dawn, Joanne and Sam 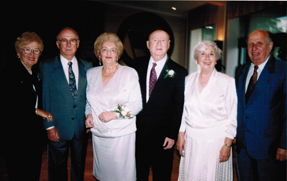 I learned at a young age from my kind and caring parents that it doesn't cost extra to be nice. I have tried to live my life with this thought in mind, treating others with warmth, respect and dignity. I do my best to be gentle, fair and kind with my family, in the workplace, and with my friends.

I never knew any of my grandparents nor my father's brother and sister as they perished in the Holocaust. My grandparents were Shmuel Alter and Malka Sura Katz (née Raber), and Alec and Hinda Stern (née Kupershmit). My parents managed to survive the Holocaust. My father spent the war years as a partisan in the Polish underground, having been shot twice; my mother, her brother, an aunt and some cousins walked to Russia to save their lives. After the war, my parents, who hadn't met yet, returned to Poland where my maternal uncle who knew my father said: "Chaim, come meet my sister!" Chaim and Manya were married three days later. My sister, Lynda Chwaiewsky, was born in a displaced persons camp outside of Rome, Italy, and they all came to Canada together in 1948.

In Winnipeg, my father worked as a presser in a clothing factory. He later owned and operated several grocery stores including the Solo store at Talbot and Watt in Elmwood. At age 65, he became a partner in a hotel. I admired his old-country work ethic and the fact that he never uttered a complaint despite his 14-hour, seven-day work weeks. The early years here were a struggle but my parents made life as pleasant as possible and never complained about how difficult their past had been.

My mother was by my father's side at the store, but mostly spent her time as a housewife and mom. I have fond memories of my mother's outstanding cooking and baking and recall that she kept a spotless home.

We lived on Alfred, Manitoba, Smithfield and then Pearce Ave. and I attended I.L. Peretz School, Jefferson Junior High, Garden City Collegiate and the University of Manitoba.

My youth was busy and active. I grew up working at my dad's store and ran some programs at the YMHA. Above all, though, I guess you could say I was a bit of a "jock." In fact, sports have played a defining role in my life. I was drawn to AZA by its football programs, and at the YMHA, I couldn't get enough floor hockey or basketball. I played varsity basketball, volleyball, tennis and badminton at Garden City Collegiate. I remember being turned on to sports while playing floor hockey at the Y when I was nine or ten. My high school coach told me that I had "raw athletic talent." I still don't know what that means, but it inspired me to seek out more opportunities in sports. I still golf and I'm the manager/coach of a team in the Winnipeg Jewish Men's Slo-Pitch League.

Sports gave me the confidence to achieve in other areas of my life. I had a good career as a chartered accountant, becoming the youngest partner in a national CA firm, and have been successful as the President and CEO of Kay Four Properties Inc. Sports instilled in me a "can do attitude", and taught me to have fun and to learn something new all the time.

When I was 16, I went on a blind date with Joanne Grossman. We married six years later in 1973 at the Bnay Abraham Synagogue. Our early years of marriage were difficult as I was earning little as a CA student and Dawn was born 11 months after we married. I think that if my dad didn't own a grocery store, there were times we might have starved. We have two wonderful children: Dawn Aviva Katz and Geoffrey Allan Katz. Geoffrey and his wife Candice have three children: Chloe Morgan, Ethan Joseph and Madelyne Michelle. One of the great joys of my life is to be a Zaida and I am blessed to live next door to Geoffrey and his family in West St. Paul, just north of Winnipeg. Dawn has earned a BA and a BSc from different universities and is enrolled in the MBA program at the University of Manitoba. Both of my children are very active in our family-run business.

I am proud to be part of the Winnipeg Jewish community. It is a compassionate community that embraced my parents after the war and continues to welcome newcomers with open arms. I am proud to contribute time and money to community causes and am especially passionate about Holocaust awareness activities, given the impact that horrific event had on my family. Tzedakah, whether in the form of charity or supporting others so they become self-reliant, is a mainstay in my life.

It is my hope that we will find ways as a community to continue to renew ourselves. We need to focus on retaining our youth by helping our young adults get set up in business and in finding rewarding careers. We need to help them find opportunities to succeed so that, like me, they will celebrate life in Winnipeg and raise their families here.