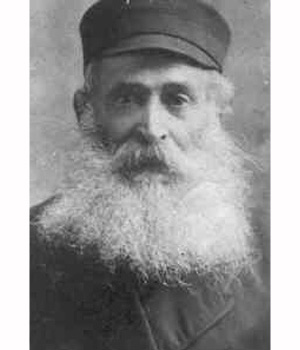 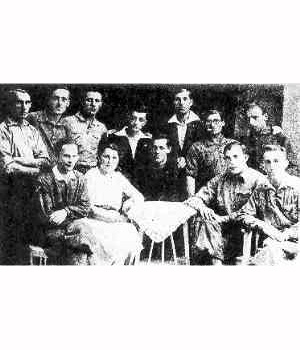 1933 in Poland: Planning to go to Israel — Sam is in the front row, second from right 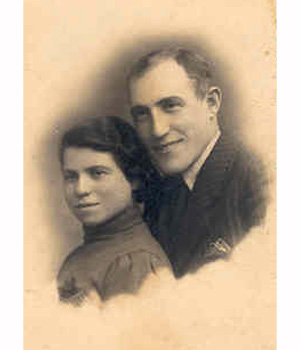 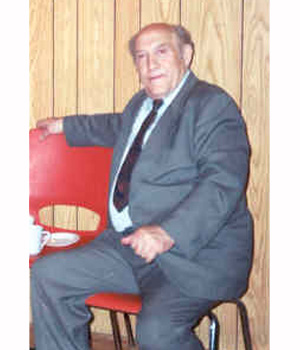 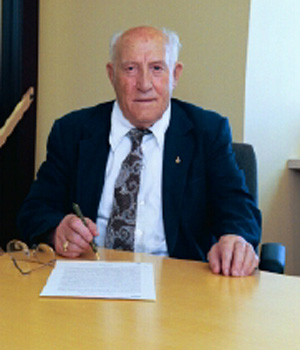 His is a story of survival.

Sam Grosberg was born on February 10, 1914 in the town of Solayev, Poland. His father Shmuel was in the grain business, a family enterprise started by his grandfather Schleume. By the time he was of school age, the first World War had ended, but life was still very unsettled. The head of the Education Department was a Polish Nazi who selected which children should be allowed to continue their education. Sam lasted only three classes in public education, he then attended for a short time at a school for Jewish children.

When he was 12, his mother Chaya died, and he saw no future for himself. He went to the big city of Lodz 40 km from his home and there lived on the streets, earning his keep in whatever manner possible to survive. One family in particular paid him to chop wood, fetch water, and rock the baby. He returned home for his Bar Mitzvah, and at the age of 15 went to live on a Jewish work cooperative. At 21, he was conscripted into the Polish Army and served his mandatory two years. A friend from the cooperative introduced him to Bluma Tashemovich, and they were married on March 3, 1939.

Three weeks before World War II broke out in September 1939, Sam was mobilized into service and was shortly thereafter captured as a Prisoner of War. In the camp of some 50-60,000 people, survival again became all-important. There were wealthy people in the camp who would trade their watches and diamonds for small necessities such as candles (to play cards at night when they could not sleep), and Sam was a skilled "tradesman". He became acquainted with a Mr. Pomerantz, an electrician, who studied the perimeter of the camp and said that if he could get a pair of insulated scissors, they could escape. Sam used his connections to acquire the scissors and one rainy Friday night, they escaped into the surrounding bush where they lived for 12 days with no food. It was during this time that Sam first saw trainloads of people being transported between Poland and Germany.

He made his way to Nasheltz where relatives of his wife lived. After persuading them it was he, he was fed and allowed a bath, the water was black like coal and teeming with lice. He was told that his wife's family had gone to Bialostock on the Russian border and he set out to find them. In Bialostock he met a woman who recognized him and took him to the synagogue where he was reunited with his family ... they could not believe he was alive. The reunion was short-lived ... one night when Sam went out to get bread, he returned to find that a train had come and his wife, who was 8 months pregnant, was gone. He searched everywhere but his frantic efforts only landed him in jail. By the time a kindly patrolman arranged to make efforts to find his wife, she was now the mother of their son. They were reunited and settled on the Russian side of the border.

He was soon mobilized to serve the Russian Army in a work camp and served the remaining years of the war there. After the war, the head of the Polish Army made a deal with the Russian Army that Polish citizens could return to Poland and Sam and his wife were happy to go back to their home. Sadly, they lost their son, Eliyahu Ben Shloma Hersh, in Russia to an epidemic of diptheria. All of Sam's family, including his parents and three sisters and their families, perished in the Holocaust.

Back home in Lodz, Sam became involved with a Jewish Agency that was smuggling Jews to Palestine but he was anxious for a new life. The Jewish Manufacturers' Association in Canada was recruiting tradesmen ... Sam signed up as a tailor and in the fall of 1946 he and his wife boarded a ship to Montreal. Their ultimate destination was to be Vancouver but once on the train west, they made it as far as Winnipeg when his wife's illness forced them to disembark.

They were met at the CNR station by Zalman Selchen and Moishe Averbach, and with some persuasion the Hebrew Immigrant Aid Society provided their first $15. Both he and his wife went to work for Jacob Crowley (and later J.H. Hecht) ... and the first pay cheque went to pay back the $15.

As his means allowed, Sam invested in property. His first purchase was a building at 600 Charles Street, and over the years he has owned many properties, houses, apartment buildings and numerous tracts of land in and surrounding Winnipeg.

Sam's commitment to the Jewish Foundation is being directed to two of the issues he is most passionate about: Holocaust education and scholarships. "The streets were my university," he says, "and I survived ... but no one should have to learn that way."