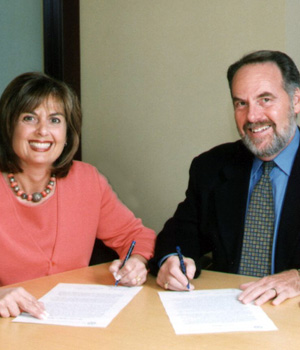 Sam and Wendy were born in Winnipeg of pioneer stock. Jack and Rose (Garfinkel) Wilder emigrated from eastern Europe, as did Wendy's father, Max Nelko, in the 1920's. Although this was at a time when it was still relatively easy to leave Europe, such a move nevertheless required courage and determination. Wendy's mother, Sally (Wolinsky), was born in Yorkton, Saskatchewan of parents who had recently emigrated from Europe as well.

Sam and Wendy's approach to life was undoubtedly forged by these pioneer values, as well as the stories told by their parents of the intolerance in the "shtetles" from which they came. These strong feelings were tempered by the manner in which their parents moved with ease into their new environments.

Max and Sally moved to Portage la Prairie in the early 1950's where they established a successful photography business. Sam's parents were grocers in the Wolseley area and, after going into the restaurant business, they later moved to the north end of the City.

Wendy attended elementary school and high school in Portage la Prairie and then moved to Winnipeg to attend the University of Manitoba and graduated from the second graduating class of dental hygiene in 1966. In 1974, she became a real estate agent and continues in that field to the present (1999).

Sam graduated from St. John's Tech and then the University of Manitoba Law School with the Gold Medal in 1965. Sam and his brother Joe founded their law practice in 1967 and continue to practice at present under the name of Wilder Wilder & Langtry.

Sam and Wendy both have fond memories of growing up Jewish. For Wendy, these memories include her being part of the first B'Nai Mitzvah in the Beth David Synagogue in Portage la Prairie which serviced the 21 Jewish families in that town and where her father was the resident volunteer Chazan. Sam has cherished memories of night classes at the Peretz Shul and the Rosh Pina Synagogue, of the old YMHA on Albert Street, of working in Israel as a student, and of generally being part of the vibrant Jewish culture in Winnipeg as he grew up.

As youngsters, Sam and Wendy became deeply involved in most organizations with which they came into contact, such as B'Nai Brith Youth, Sigma Alpha Mu Fraternity and the University of Manitoba Students' Union. As a married couple, they worked closely together for many Jewish and general community organizations, such as Jewish Child & Family Service, the Shaarey Zedek Synagogue and the Manitoba Bar Association, for which each organization Sam ultimately served as President. In addition, Sam has been on the national executive of the Canadian Bar Association, a bencher of the Law Society of Manitoba, and served as a board member of many other community organizations. Wendy has been active in Hadassah (Becky Sokolov Chapter), National Council of Jewish Women, Winnipeg Beach Day Camp, Winnipeg Real Estate Board, and the Women's Endowment Fund of the Jewish Foundation of Manitoba.

Sam and Wendy have three children: Lisa, Steven (Raven) and Jonathan. Their hope is when their grandchildren read this, they will feel in some small way their parents have contributed to the continuity and preservation of Jewish life and all its institutions in Winnipeg and that they will add their own chapters to their parents' story and to the story of the Jewish community in Winnipeg.