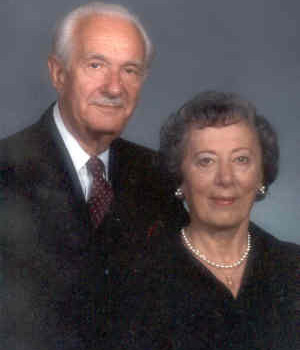 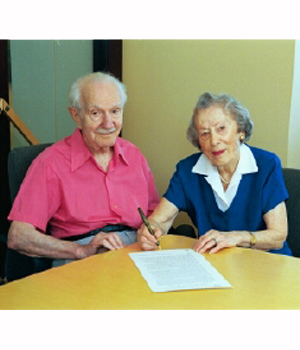 Sam and Pauline sign their Endowment Book of Life story

Sam Zinman was born in Winnipeg in 1911, to Tziporah and Manasha. He has one brother Bill and two sisters Rose and Lillian. His parents established a very Jewish home for the family. His father was involved in communal affairs, being President of the El Yankov Synagogue and a board member of the Mount Carmel Clinic. Sam attended King Edward and Isaac Newton School before graduating from St. John's. He chose accountancy as a career path and attended Coopers Institute of Accountancy where he received his diploma. He worked for many organizations and firms. In 1935 he met his future wife Pauline Shell.

Pauline Shell was born in Russia in 1912 and arrived in Winnipeg in 1924 with her parents Chana and David and two brothers, Hyman and Bill. Her third brother, Ben was born in Winnipeg. Pauline did not speak any English and she entered kindergarten at David Livingstone as a twelve-year-old, two years later she graduated from grade six. The family then moved to Sandy Lake, Manitoba where her father operated a general store. There was only one other Jewish family in Sandy Lake, but many Jewish families in the surrounding towns. The Shell household was the meeting place during the High Holidays and other religious holidays. Pauline did junior high in Sandy Lake and then moved to Winnipeg and stayed with distant relatives to complete her high school, which she did in 1931. She was then accepted at the Winnipeg General School of Nursing in 1932 and graduated in 1935. The Shell family moved back to Winnipeg in 1934. The Shells were founders of the "Ardus Free Loan Society". Chana Shell was active in communal affairs generally and was President of the Winnipeg chapter of Hadassah for many years.

Both Sam and Pauline received their Hebrew education in different manners, Sam was tutored at home by Mr. Handler, while Pauline attended night classes at the "big" Talmud Torah. During their teenage years they both worked on weekends to help their families through the early stages of the Depression.

In 1937 Sam and Pauline married and began raising the focal point of their lives ... their three children, Elaine (Dr. William Bebchuk), Bonnie (Dr. Michael Helper) and Ted (Ann Blitt). All the children were raised with an emphasis and focus on education. Elaine graduated in nursing, receiving the gold medal. Bonnie graduated in law and was also a gold medallist (she is now a Justice in the Court of Appeal). Ted also graduated in law and received the Greenberg Award. Sam and Pauline are blessed with ten grandchildren, who are all professionals, and five great grandchildren.

Sam and Pauline were among the founders of the Herzlia Academy with the guidance of Rabbi Kravitz, Mr. J. Wolinsky and Mr. Nate Rothstein to establish a Jewish school in River Heights.

When reflecting upon some wisdom that they would both like to pass on, they would encourage the younger generations to not hide their Judaism. "It is important to know your heritage and it is important for others to know it also." In terms of Israel they believe that its existence is very important for all Jews, those that live in Israel or Winnipeg or those that are spread throughout the world. Sam and Pauline also hope that Winnipeg continues to offer excellent educational opportunities for our young community members.