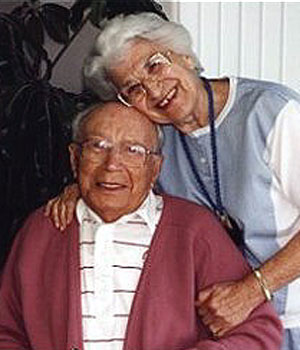 My parents, Clara and Joe Erlichman 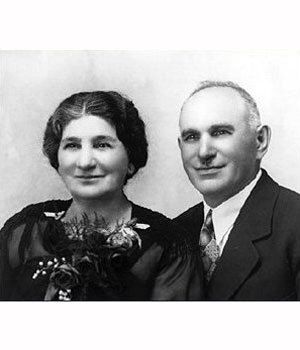 My grandparents, Fanny and Samuel Simkin

My grandparents, Fanny and Samuel Simkin, emigrated to Canada from Russia as the 20th century was dawning. They farmed and raised a close-knit family on land set aside for immigrants in Pineridge, Manitoba.

My mother, Clara, second of their seven children, was born in 1912. My father, Joe Erlichman (1904-1995) escaped to Canada in 1920 from Zhwanitz, Russia, where he was an apprentice pharmacist. Shortly after arriving in Canada he developed tuberculosis. While at Ninette Sanitarium he learned, and grew to love, photography and photofinishing. My parents were married in Winnipeg in 1936. I have one sister, Eby (Sam) and one brother Martin (Sherri-Ricki).

I grew up in a home filled with music on Aberdeen Avenue in Winnipeg's thriving "Nord" end. I enjoyed speaking Yiddish with my grandparents and visiting them at the old Lubavitcher Shul. I treasured our family's multi-generational Friday night dinners, Chanukah parties and Pesach Seders. I loved summers spent at the family cottage at Winnipeg Beach.

The values embodied in mentschlechkeit, Yiddishkeit, tzedakah, unconditional love for family, the celebration of tradition and respect for all people, modeled by my parents during my formative years became the principles on which I have based my way of being.

I married Hartley Gale in 1955. We had four marvelous children: Sheldon (Nancy), David, Susie (Brad) and Lisa and now we have five wonderful grandchildren: Skyler, Sarah, Harris, Avery and Joshua.

I was a stay-at-home Mom while the children were young, managing the household and involving myself in volunteer work. I continued volunteering even after assuming a role in the management of the family business, Winnipeg Photo Ltd., founded by my father in 1929.

Some of my community involvements have included serving as President of both Talmud Torah P.T.A. and National Council of Jewish Women, Winnipeg Section, Chair of the Jewish Welfare Fund, Women's Division, Board member of the J.N.F. and the Jewish Foundation of Manitoba, teaching at the U. of M. Medical School and counselling at both Klinic and Village Clinic.

I am proud of my family's respected name in both the secular and Jewish communities in Winnipeg, and of the role we have played in the growth of those communities and of Israel.

I am a truly fortunate woman.