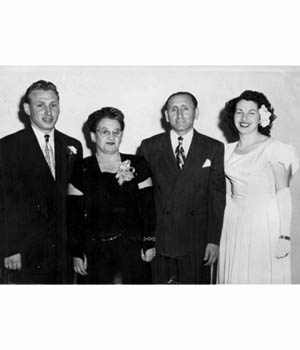 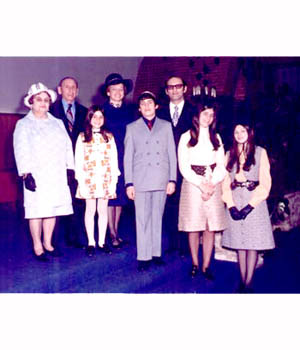 Grandparents Ruben and Rose Youssiem, with the Klapman family

Ruben Youssiem, my father, was born in Rovna, Russia on April 7, 1903. My mother, Rose Zamick, was born in Stanislavtchik, Russia, on September 9, 1905. As young people, independent of each other, both found their way to Winnipeg. My mother came with her brother Sam and mother Zipora (nee Lerner) in 1918, their father David Zamchofsky had preceded them in 1917. My parents later met in Winnipeg and married in December, 1924. My brother Saul was born in 1926, and I came along in December, 1929 - a "depression" baby.

My father had a series of jobs including Soudack Furs, peddler, Globe Radio & Furniture, and driving for the "berdelach". When he retired, it was as a taxi driver. When I was 11 my mother went to work for Sterling Cloak. Her job was hand finishing cloth garments, and she was a dedicated employee there for 30 years. She had taken a night school course shortly after arriving in Canada, in order to learn to read and write English.

I grew up on Manitoba Avenue and attended William White and St. John's Tech schools, and the Talmud Torah for my Hebrew education. After graduating, I worked at City Machinery until my marriage to Sam Klapman on February 12, 1950 — the year of the great flood.

Sam and I have four children and ten grandchildren. Our daughter Saundra was born in November 1951 and has taught at the Ramah Hebrew School, and now at the Gray Academy, for many years. She and her husband Sam Malamud, a lawyer, have two children Andrew and Allan, both of whom are students at Concordia College in Montreal. Our daughter Marla Bernstein, born in October 1954, also lives in Winnipeg and has three children, Aaron, who is at the University of Manitoba, and Jason and Steven, who attend high school. Our son Hartley, born in March 1958, and his wife Drew Salters are raising two daughters, Dana and Brady Rose. They live in Winnipeg where Hartley manages our family business. Our daughter Jody, born in June 1960, and her husband Brian Goldberg live in Toronto where Brian has a software company specializing in software programs for computerized embroidery machines. They have three children, Carly, Hannah and Kevin.

Raising my children kept me very busy but I was happy to be involved with various Jewish community organizations, particularly Winnipeg Women's ORT. For 14 years I chaired the ORT Thrift Shop and today I am honorary vice-president of ORT Winnipeg. I am also a life member of Hadassah and Winnipeg Women's ORT, and a member of National Council of Jewish Women, Pioneer Women and the Women's Endowment Fund. I also enjoyed volunteer work at the Misericordia Hospital.

When I was a child, my happiest days were spent at B'nai Brith Camp in Sandy Hook. Since my family was not able to afford this luxury, it was made possible by the donations of others. I feel privileged to be able to support various community organizations, and my commitment to the Endowment Book of Life is an opportunity to give back to community in the way that was given to me.