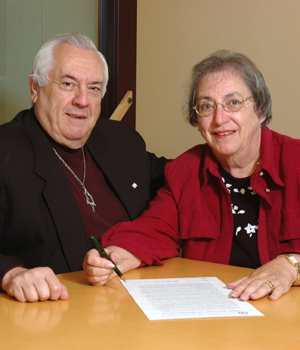 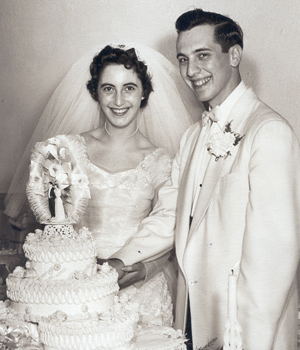 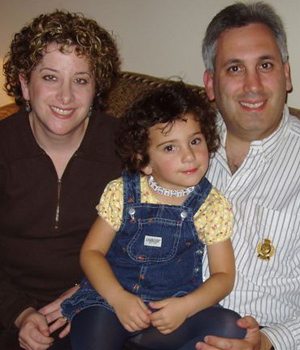 The Charach's son Avrom with his wife Faye and daughter Carli 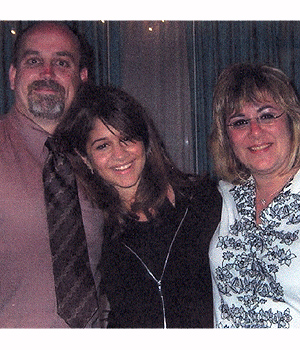 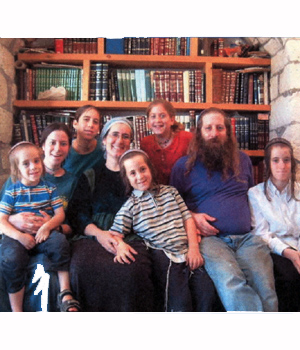 As people who have encouraged & embraced community and volunteerism in their lives, Ruth & Barney are eager participants in the Endowment Book of Life. What better way to leave a legacy to your grandchildren than to show them by example that it is better to give than receive. According to Barney, "we always received more from our involvement than we ever gave".

Ruth, along with her five siblings, is a product of an arranged marriage between Ethel Piesklaik, from Ontario, and Labe Katzman, from Prince Albert, Saskatchewan, via Russia. A very traditional, strict, but generous, orthodox Jew, Labe slowly learned how to live with a more modern, educated woman. Ruth's childhood memories are of a social life that revolved around the Jewish community, after-school Jewish classes and Sunday social events at the synagogue. Ruth's formative years were spent in Saskatchewan bouncing between Prince Albert, North Battleford and Saskatoon. After her cattle-buyer father's health deteriorated, the family settled in Saskatoon, operating a general store. It was at this stage in her life that Ruth began volunteering with Young Judea, which provided the opportunity to develop her leadership skills. Graduating from high school and living with a father who felt that education was reserved for boys, Ruth took a one-year business course and headed out east to her mother's family to earn her own way and develop her own sense of independence. Eventually Ruth decided that Winnipeg would be her home and she settled into a life as a socially active, independent young woman who was earning her own way.

New Year's Day, 1956, Ruth met Barnett Charach. Barney was the Winnipeg born son of Clara (Sabblut) & Irvin Charach. Unusual for the time, both of Barney's parents were also born in Winnipeg. Clara was the youngest of seven children of Katie & Baruch Sabblut, from Russia via London, while Irvin was the middle of the three Charach children whose parents were from Russia.

Life in the north end of Winnipeg allowed Barney to attend Aberdeen School, St. John's and United College. After trying his hand at university Barney "figured" out that he enjoyed numbers and began a 43-year career in chartered accountancy. In the same year, 1956, that he and Ruth married, Barney started his relationship with accounting. Graduating in 1962, Barney was a member of a number of predominantly Jewish firms that went through numerous mergers and amalgamations. Local humour titled the new firm "UJA" — United Jewish Accountants.

Ruth & Barney are most proud of their children. Their eldest child, Gayle, lives in Ontario and has one daughter, their second, Lori Sue, lives in Safed, Israel, and has six children, while their youngest Avrom, lives in Winnipeg and has one child. All of their children were educated in and graduated from the Jewish day school system, Talmud Torah and Joseph Wolinsky Collegiate. Their only variation was that all the children spent their grade ten year studying at Kfar Blum in Israel. Barney & Ruth raised their children in a liberal Jewish environment which encouraged a highly developed value system, personal choice and community involvement.

From a historical perspective, both Ruth & Barney have a wide range of community participation that is not limited to the local Jewish community. Although a simple list would provide an understanding of the scope of their involvement, it would not do justice to the most influential of volunteer experiences. For a marriage to work, one partner must be supportive of the involvement of the other. When their children were young, Ruth was active in National Council of Jewish Women, while Barney took his accounting background and assisted in developing a sliding scale approach to tuition fees for the day school Jewish educational program. This system in some variation is still utilized.

Barney & Ruth now travel extensively. First as a board member and then as president of the Folk Arts Council of Winnipeg, Barney had the opportunity to meet many representatives of other cultures. With the support and encouragement of Ruth they have gone on many adventures with people that they have met through their volunteering.

Some of their fondest volunteer experiences however are as a couple. Together they worked on the Sarah Sommer Chai Folk Ensemble, which showcased Israeli dance and song, with a child living in Israel, they became active in PNAI, Parents of North American Israelis, most recently they were both awarded the "Shem Tov Award" recognizing their contribution to assist Jewish Child & Family Service in resettling Argentinean immigrants.

Winnipeg is their home and they are community supporters. Barney & Ruth recognize all the opportunities that Winnipeg afforded them when raising a family and developing quality of life. Rather than keeping it a secret they want to spread the word and do their share in enhancing the community.