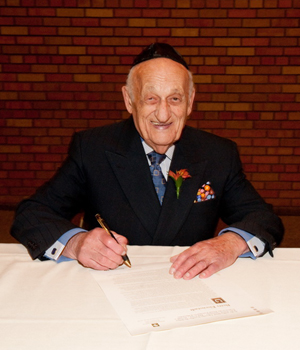 Ruth Warnick and Bill Shell met at house party in 1933 and, after a long courtship and 69 years of marriage they say "we've been partying ever since!" That optimism and good humour has no doubt carried them through a lifetime of changes and challenges.

Bill Shell was born in Kiev, Russia on September 5, 1915, the son of David and Anne (Chana Taran) Shell. He had two older siblings, Hymie and Pauline (Zinman). It was an austere but contented life, until the political and economic turbulence led to the Bolshevik revolution. As an 8-year-old boy, Bill witnessed the Bolsheviks stab his grandfather to death, which was an event that he has never forgotten. The family knew they had to leave Russia in order to survive. They fled into the forest and, after surviving on grass, berries and river water for two weeks, they emerged in Romania.

Bill's Uncle, Max Shell, had immigrated to Canada and was somehow able to provide the family with passports. In Romania, the family boarded a cattle boat. Three times, they switched boats by walking over planks mid-ocean from one boat to another and after a month, they arrived in Halifax. From Halifax they took the long train ride until they finally arrived in Winnipeg with absolutely nothing — no clothes but the ones on their backs, no food, no money, and no home. A Jewish immigration organization provided shelter and food for several weeks. With the help of his cousins; the Pollock family, David was able to buy a horse and wagon and became a fruit peddler. One day the horse ran wild and he was thrown from the wagon. He was hospitalized with serious injuries and consequently, Bill and Hymie began to sell the fruit door to door to earn money for the family, which now included their new brother Ben. Once David was back on his feet, he started a new business as a "jobber". He bought irregular clothes from Eaton's "basement sales" and resold them to country stores. In the meantime, Bill began school at David Livingstone and attended there until Grade 5. Bill's father eventually rented a home on Jarvis Avenue and along with the Pitch family created the "Achdus Free Loan Society". The Society met every Sunday to determine who they would loan money to. Loans were usually provided to recent immigrants to start a business in order to make a living. Families combined their meager earnings to give one person the means to make a living. Once that person was earning an income, he would repay his original loan and they would help the next person get started, and so on.

For five years, the family moved to Sandy Lake where David owned a general store. Bill attended the local school to Grade 8, and then took Grades 9, 10 and 11 by correspondence. Each week he took the required exam at the elementary school. Bill's ultimate goal was to attend medical school, with the tuition being $100. Once the family was back in Winnipeg he got a job delivering groceries for $5 a week. While it may have seemed possible that he should have been able to raise the required tuition in just twenty weeks, the fact was that he had to pay his parents $4 a week for room and board, which left only $1 a week for his own expenses, which included dating his beloved Ruth.

Ruth was born in Winnipeg in 1918, the daughter of Philip and Adella (Hollander) Warnick. Both Philip and Adella came to Winnipeg as young people, he from Russia and she from Romania. Adella was able to earn money to bring her family to join her. Ruth is the middle of three siblings — she has an older brother Jack (Vancouver) and younger brother Bill (Los Angeles).

Philip was a musician. He played the trumpet at weddings and Bar Mitzvahs and was the leader of the band at Minuk's Dance Hall. The family lived at 352 Jarvis Avenue. Ruth attended Aberdeen School and St. John's Tech. She remembers her childhood as being lots of fun - friends, family, neighbours, the YMHA, parties and dances. Ruth's first job was in a confectionary near the General Hospital for $5 a week. It was when she was 15 and Bill was 18 that they first met at a house party. "He liked the way I danced," smiles Ruth.

They were married on July 7, 1940 in a small family wedding with Rabbi Kahanovitch officiating. Ruth's mother worked hard and prepared the luncheon for the immediate family. Bill's friends from the Brandeis Lodge had a stag and raised $72 for the young couple. They honeymooned in a small cabin in Clear Lake — they caught a ride there with an aunt and uncle from Dauphin who had attended the wedding. How times have changed — today they own a cottage in Gimli and enjoy it with their entire family.

Two years after their marriage, with some borrowed money and the money he had saved working at Walter Woods (and playing gin rummy!), Bill bought a country store in Russell, Manitoba. He promised Ruth they would only stay there five years and he kept his word. It was a hard life for Ruth in a home that had no running water or electricity. When Bill and Ruth moved back to Winnipeg, he purchased a home on Elm Street and five months later purchased the Winnipeg Dental Supply Company, which he owned for 31 years before retiring.

When their children were growing up Ruth and Bill were involved in activities that interested their children like hockey, baseball, bowling and soccer. Both were active with the Brandeis Lodge, Ruth with the Ladies Auxiliary. Bill is a long-time canvasser for the UJA/CJA. They believe in, and practice, charity and are contributors to numerous organizations.

The Shells are also generous of spirit and enjoy many lifelong friendships. Today they enjoy their cottage at Gimli, going out for dinner ("although Ruth is an unbelievable cook!" adds Bill), watching sports, and spending time with friends and family. They say much of their time is spent "just looking after each other", and it is evident that, after 69 years, the love and respect between the two of them has not faded. Indeed, they make it look like a party.