Roy and Chaim Birnboim In Memory of Menashe and Shifra Birnboim 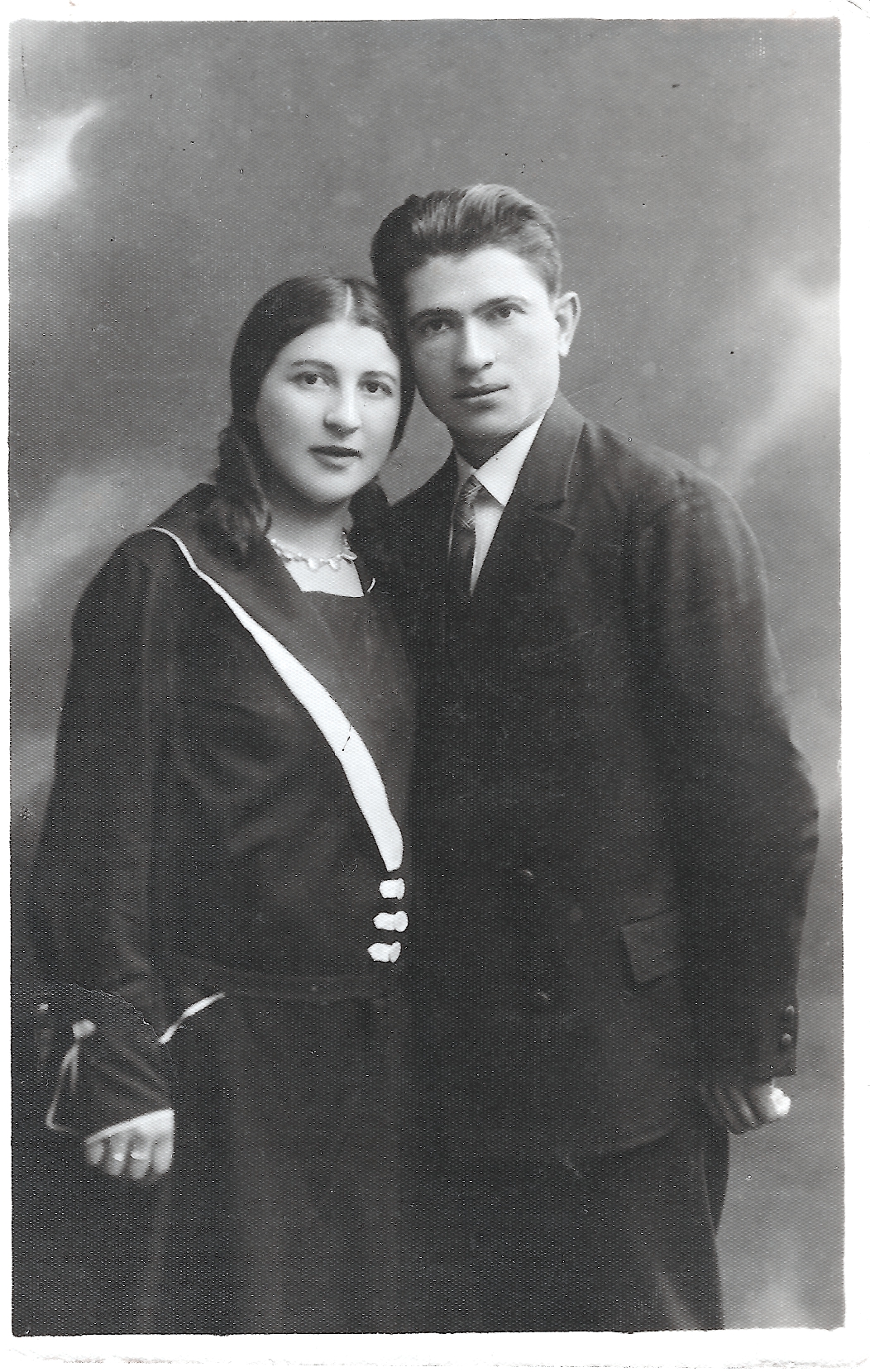 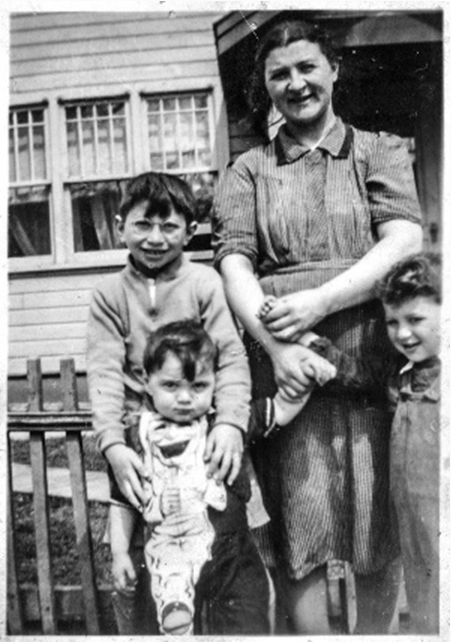 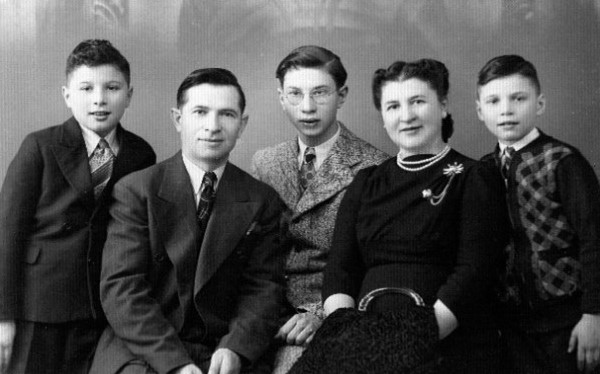 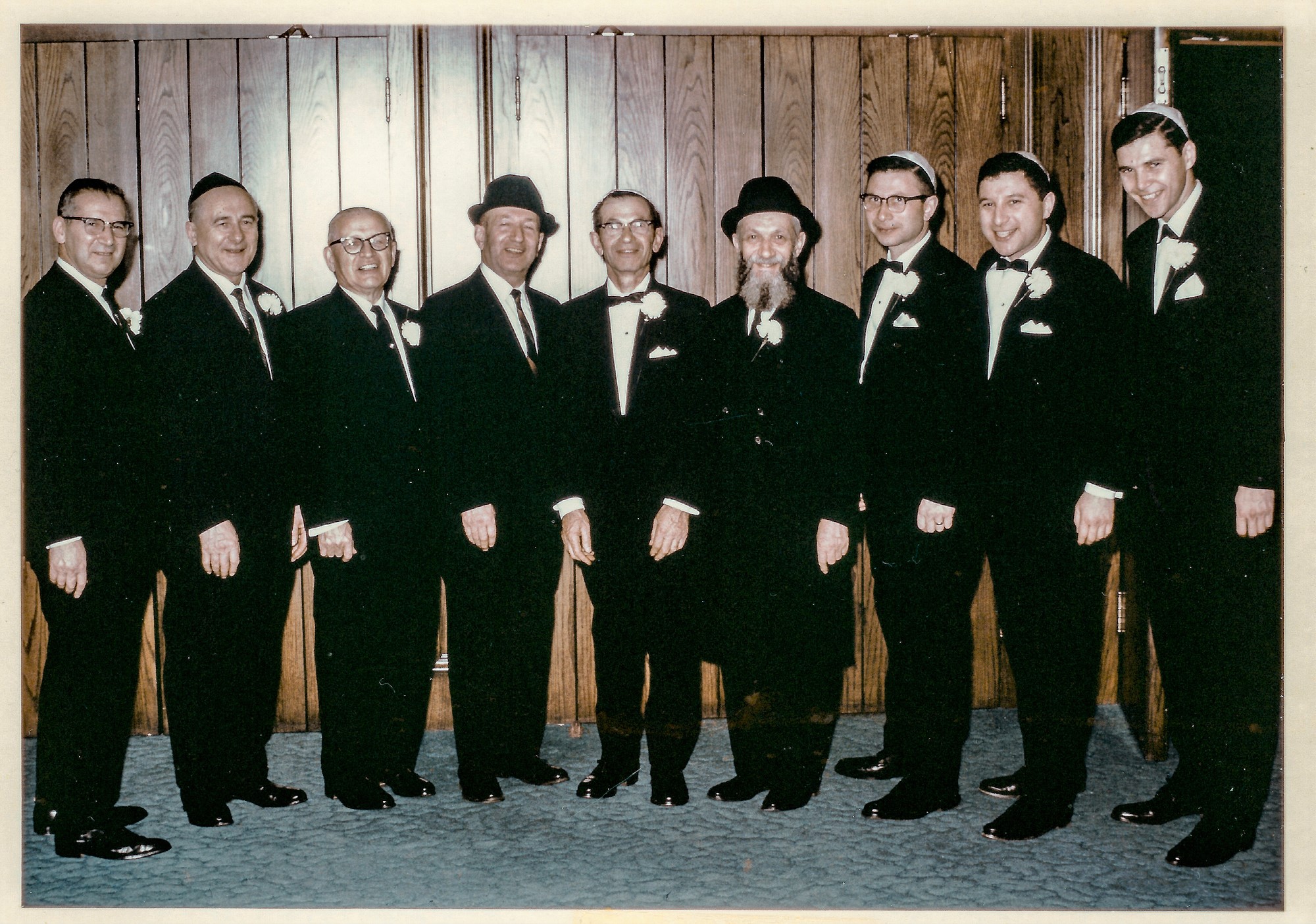 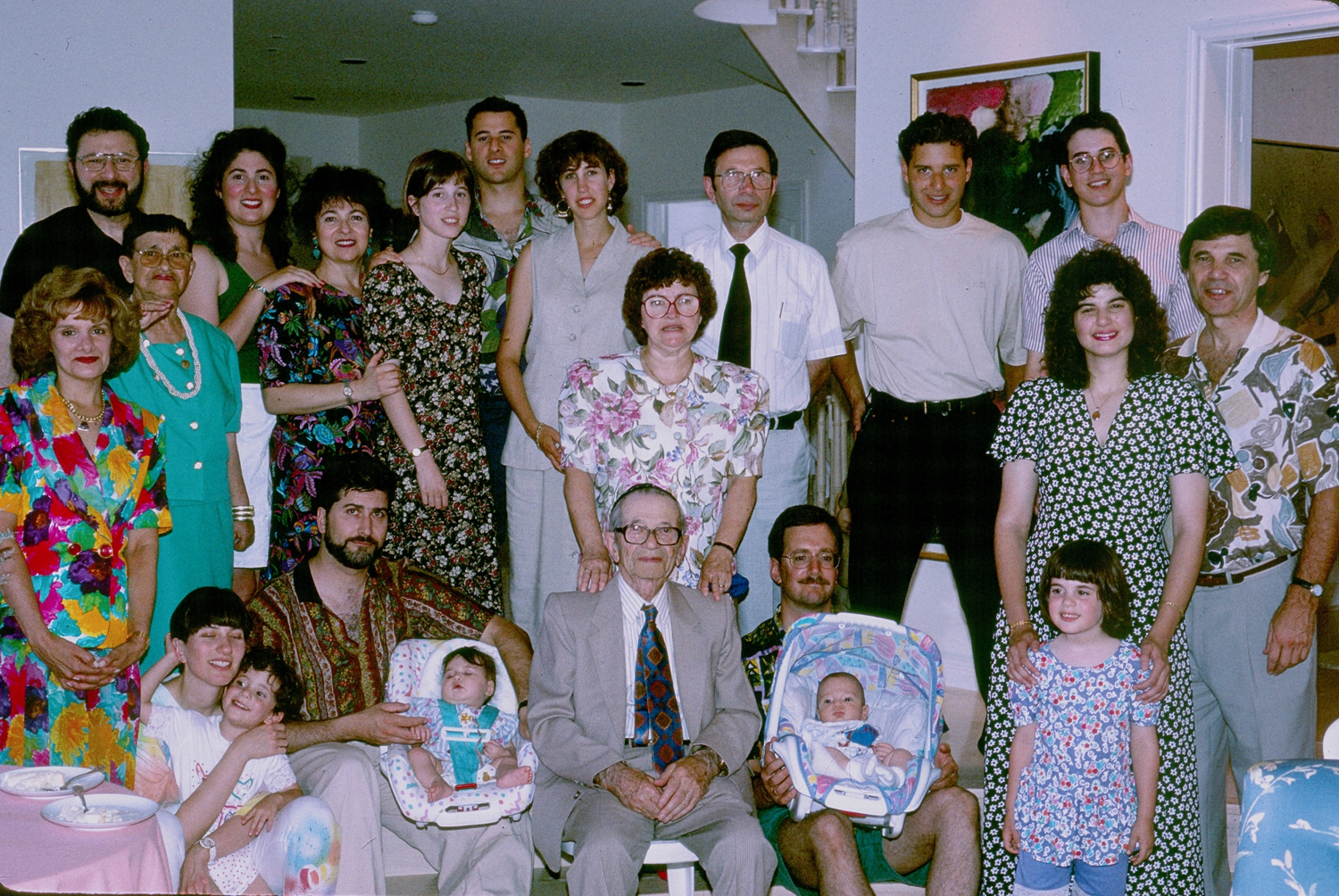 Menashe Birnboim on his 90th birthday. Surrounded by his 3 children, 7 grandchildren, 4 great-grandchildren and spouses.  1994, Toronto, Canada.

This story is our tribute to Menashe and Shifra Birnboim, who emigrated from Poland to Canada before the war.  Their struggles and successes are recounted with love and respect by their two younger sons, Chaim and Roy.  Sadly, their eldest son, Meir, passed away many years ago.

Menashe Birnboim/Barenbaum and Shifra Garfinkel/Gorfinkel were born in (what is now) the Brest-Litovsk region of Belarus/Poland, in shtetls that were not more than 120 km apart. Menashe was born in Kosava in 1904, the second eldest of 8 children of Efraim Barenbaum and Sorah Rochel Kadishevich.  Shifra was born in Kamenetz in 1908.  She was the fourth eldest of 7 children (the youngest died at an early age).  Her father, Yikuse’el Koifman Garfinkel and her mother, Sorah Rivka Mekler, had a small general store in Kamenetz.

Menashe’s formal education ended at the age of 10 at the start of World War I in 1914.  He appears to have been a precocious student and, during that short period of time, it seems he acquired an encyclopedic knowledge of Torah and Talmud.  After the war started, he helped his family survive by working at diverse jobs including for farmers to protect their produce and livestock from marauding thieves. When the war ended, the economic struggle continued and he began to dream of a better future, outside of Poland.  He was a leader of a Zionist youth movement scheduled to make aliyah to Palestine in 1927, following his older brother’s lead in 1925.  But fate intervened.  Shortly before the group was to leave, Menashe was arrested and jailed for a few days because a picture of Karl Marx happened to be hanging in the hall where the group was meeting.  Menashe missed the boat. Palestine was not meant to be and his destiny would become “America”.

During this period of time, Menashe was somehow able to acquire certain building trade skills, with particular proficiency in the manufacturing of concrete structures.  As economic opportunities diminished in Kosava, he learned of a possible job prospect in Kamenetz with a family business that manufactured large concrete pipes. Menashe’s skills proved to be impressive and he was soon offered a partnership if he would commit to staying.

Menashe apparently developed other interests, having noticed a group of young women who would occasionally pass by his workplace.  He was specifically captivated by one very attractive member of that group. Using his charm, he introduced himself to Shifra, who became equally attracted to Menashe.  In December, 1929, they were married.  Their future became Canada, where 3 of Shifra’s brothers lived (1 in Sioux Lookout, Ontario and 2 in Winnipeg, Manitoba).

In 1930, Menashe immigrated to Canada and Shifra, then pregnant with their first child, Meir, followed in 1932. His first stop in Canada was a brief visit to Shifra’s brother Jack in Sioux Lookout en route by train to Winnipeg, where Shifra’s other 2 brothers, Louis and Morris, lived.

At that time, early in the Great Depression, a job opportunity arose in Portage la Prairie, Manitoba.  The small Jewish community was looking for someone qualified as a Hebrew teacher and a spiritual leader for their synagogue. Menashe was offered the position and had an immediate positive impact.  Importantly, he was able to save enough money to arrange for Shifra and their infant son, Meir, to come to Canada.  They arrived in Halifax in May, 1932.  Menashe, Shifra and Meir remained in Portage la Prairie for about 3 years, with living quarters in the synagogue. It was a mutually rewarding experience for both the local Jewish community and the Birnboim family.

The journey of settling into Canada continued.  In 1935, the Birnboim family moved to Winnipeg, where 3 of Shifra’s brothers, Louis, Morris and Izzy (who had immigrated in 1930 from Poland) lived.  It was the family’s hope that Menashe with his knowledge of Torah and Talmud combined with his previous teaching experience could make a living as a private Hebrew teacher. Their move from Portage la Prairie was to a rented house on Redwood Ave.  In 1936, their second son Chaim was born. The following year, their third son Roy was born in a house on Prichard Ave that the family had purchased.

The Birnboim family had now expanded to 5, with Shifra as the balabusta of a growing family.  Menashe had challenges trying to make a living as a private Hebrew teacher. Trying was the “operative” word, as his radius of travel to his students’ homes expanded to the suburbs of Winnipeg – Transcona and West Kildonan.  He travelled by bicycle and streetcar.  Eventually, he had to travel further afield to Jewish families living in neighbouring towns, such as Garson, Selkirk and Beausejour.  Menashe became a frequent passenger on the Greyhound bus line. Yet, notwithstanding Menashe’s strong efforts as a private Hebrew teacher, the family’s financial future remained uncertain.

At that time, about 1940, a confluence of circumstances emerged.

I. Making a living as a full-time private Hebrew teacher remained a perpetual challenge.

II. With the outbreak of World War II in 1939, there were new job opportunities in Winnipeg, specifically in the wartime aircraft industry.  Menashe gained employment at MacDonald Aircraft, which gave the family a measure of financial security.

III. Menashe and Shifra came to realize, after buying and improving their house on Prichard Ave, that Menashe’s ability to renovate a house at relatively low cost could substantially enhance the value of the property.

These circumstances led to a paradigm shift in the path towards becoming more economically stable.  We are uncertain how long Menashe worked at the aircraft factory. But it was during that time Shifra’s and Menashe’s mindset shifted to the concept of buying a house in need of repairs, renovating it and re-selling at a profit. This added value concept was validated and reinforced with each house purchased, renovated and sold. This business acumen was an intrinsic strength that Shifra possessed.  It was unusual in those days for a woman to be so active in this type of business. Menashe equally appreciated the concept and, together with his innate building trade skills, an evolving business model emerged.

This model led to our becoming a semi-itinerant family, moving in a relatively short order from Prichard Ave to Atlantic Ave (in 1943), to Bannerman Ave and then to Polson Ave.  We finally found a permanent home at 426 Inkster Blvd in 1950 (after the big Winnipeg flood), a few years before the Talmud Torah was relocated to nearby Matheson Avenue.  This business practice of improving and reselling houses now included keeping some as investment properties.  As this proved successful, it allowed Menashe and Shifra to begin to accumulate capital.

During that time, Menashe became very active at the new Talmud Torah Synagogue.  It came to play an important part in his life. The spiritual leader of Talmud Torah was Rabbi Abraham Kravetz, who became a dear friend. Rabbi Kravetz convinced Menashe to become the synagogue’s Ba’al Koreh (reader of the Torah during prayers).  He continued to serve in this pro bono role for many decades where his dramatic reading style engaged a generation of North End synagogue-goers.  Also, he had a penchant for chess, playing regularly at the chess club.  Menashe remained close with 2 younger siblings who had survived the war and immigrated to New York.  He also remained in touch with his oldest brother who had emigrated earlier to Palestine/Israel.

Shifra took great pride in maintaining a Jewish home, preparing traditional family Shabbos meals and celebrating the Jewish holidays with her brothers and their families. Her other interests included embroidery and decorating the family home.

The family real estate business continued in this mode until the late 1950s.  A decision was then made to pivot to a different asset class of property – an apartment building - and a new corporate entity, Birn Investments Limited, was formed in 1959.  The corporation bought the Sammy fraternity house on Pembina Highway abutting the Red River. A 5-storey, 75-unit apartment building (the “Arizona Plaza”) was constructed on the site in 1961.  Together, Menashe and Shifra faced the major challenges associated with the construction of an apartment building and leasing it in a soft market.  Ultimately, however, this forward-thinking decision to undertake this project proved to be correct and lead to a financial success.  Shifra lived to see this crowning achievement after decades of hard work.

In 1964, tragically Shifra suffered a serious stroke that severely impaired her mind. There was no improvement over time and Menashe became her main caregiver until her death in 1974.

Roy married in 1966 and moved with his family to Toronto in 1978 by which time the real estate properties in Winnipeg had been sold.  His experience in the family real estate business provided Roy with the confidence to pursue his own strategy of real estate investment in a larger city.  Menashe moved to Toronto in 1980 to be with family and to participate in Roy’s new endeavours.

Equally rewarding for Menashe was his active participation in an Orthodox synagogue.  Fortuitously, his condo was only a few blocks from Congregation B’nai Torah, where Rabbi Raphael Marcus was its spiritual leader. This congregation possessed a depth of Talmudic knowledge and the energy of youth, all of which allowed Menashe to enjoy its ambience and to debate and to be challenged by the Rabbi and the congregants.  Menashe, educated as a youngster in a little yeshiva in the old country, was said to be able to “hold his own” in Daf Yomi discussions. He was held in high regard and the learned congregation adopted him as a respected elder.

On his 90th birthday celebrated in Roy’s home, Menashe’s mind was clear and his spirit was high. Family came from far and wide to celebrate this event with “Uncle Menashe”. It was an extraordinary gathering of the Birnboim/Garfinkel clan.

Sadly, 2 years later, tragedy struck the Birnboim family. Menashe’s and Shifra’s oldest son, Meir, passed away of cancer at the age of 66.  Although devastated, Menashe’s resiliency allowed him to continue in relatively good health.  He continued to do what he thoroughly enjoyed – maintaining an active interest in the real estate properties and participating in vibrant discussions at B’nai Torah.  His condo remained a magnet for family and friends who joined him for Shabbos meals and other happy occasions. He continued to take pride in his growing family’s successes until his passing at the age of 97 in 2001. He was survived at the time by 2 sons, 7 grandchildren and 7 great-grandchildren.