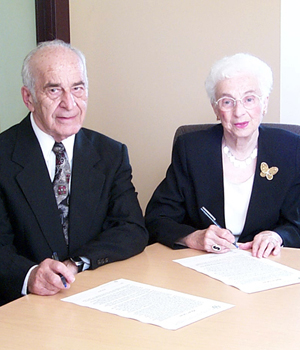 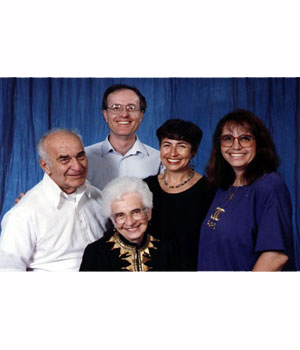 The first "women's libber" wasn't Gloria Steinem - it was my mother, Sarah (Hamovich) Weisman, who always believed in equal rights for men and women and that women could work with men in any trade. As a result, she and my father, Jack Weisman, of blessed memory, worked side by side in their Ice-Cream and Confectionery Bar on Main Street & Higgins, from 1916 to 1967. Even today, at the age of 103 years (written in March, 1999), she is advocating that women in the Sharon Home be counted for the minyan so that Shabbat services could be held in the Home.

Both my parents came from Roumania - my mother in 1908 with her parents, Meyer David and Rachel Leah (Hangui) Hamovich and her five siblings (the sixth, Ralph Hamovich, was born in Winnipeg). My father came alone in 1914, leaving all his family in Roumania, where many of them were killed in the Holocaust. My parents married in 1916 in Winnipeg.

I grew up on Flora Avenue between the Talmud Torah School on one corner and Chief Rabbi Kahanovitch on the other, and together with my parents' religious commitment, I was steeped in Judaism. I attended the David Livingstone and William Whyte Schools and graduated from St. John's Tech, as well as attending the Talmud Torah Night School. In my late 50's, I attended (sometimes with my children and husband) the University of Manitoba Judaic evening courses.

Because my parents were avid community workers, their three children - my late sister Fay Slutchuk, of blessed memory, my brother Harvey and me, were taught to give back to the community what we had been given as youngsters.

I belonged to Young Judea at the age of ten, and served as President of the Winnipeg branch. Together with the late Oscar Wilder we were winners of the Western Judaea Baltzan Debating Trophy and the Jr. & Sr. Oratory Trophies. I was also a member of the Winnipeg Jewish Musical Club and served as President of Jr. Hadassah. For 40 years I was a member of the Brandeis Lodge Zionist Ladies Auxiliary, was a President , and a recipient of the S. Hart Green Jr. Trophy for Lady of the Year. I also worked for many years as a typist at Athletes Wear Co. At present I am on the boards of the Winnipeg Jewish Community Council and the Jewish Heritage Museum and Historical Society.

My husband, Meyer Silver, and I have been married for 53 years and are the proud parents of three children - Vivian (Lewis Zeigen) in Israel, Rochelle (Mati Gamliel) in Winnipeg, and Neil (Jemmie Gord) in Calgary. We have 8 grandchildren.