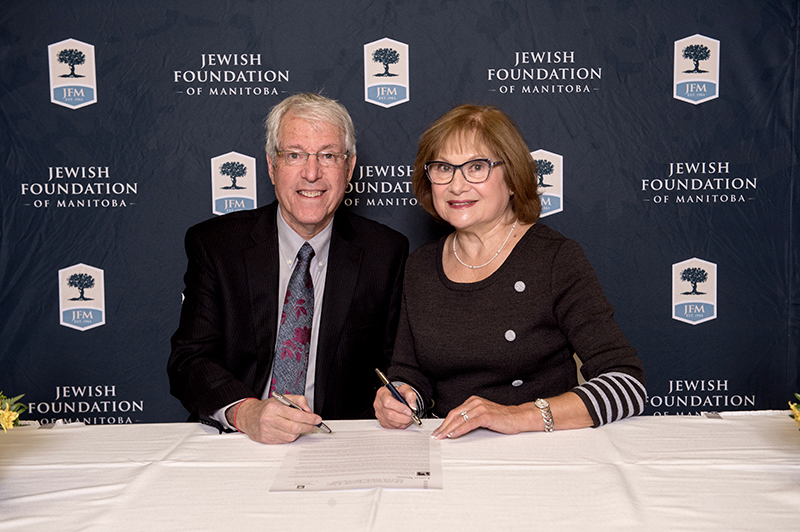 Hard, steady work marks the story of Roslyn and Mickey Rosenberg. Recruited to a position with General Motors Acceptance Corporation, Roslyn stayed with that company for several years, followed by 30 years with The Hudson's Bay Company. Mickey knew he wanted to be a lawyer since his second year of university and has now been in that profession for over 50 years. Their quiet dedication is no doubt a tribute to the people who raised them and who led by example.

Alex Mandel, Roslyn's father, was born in Gitomer, Russia on January 24, 1911. His father, Srul, immigrated to Canada and, once he had found a job and bought a house, he sent for his wife Zelda and two young sons — Michael and Alex. A third son, Ben, was born in Winnipeg. Srul worked as a representative for Eatons. During war-time, merchandise rationing meant Eatons was unable to obtain sufficient inventory, so he bought clothing from local wholesalers and sold it back to Eatons. He was industrious and resourceful to provide for his family.

Roslyn's mother, Lily, was born in Winnipeg on May 27, 1916. Lily's father, Jacob Reich, was a widower with two children when he married her mother, Rose (whom Roslyn is named after). They had three children together, Lil being the oldest. Jacob operated a grocery store at the corner of Redwood and Arlington in north Winnipeg where he raised his family.

Alex and Lil had a beautiful wedding on June 16, 1940. They raised their three children — Roslyn, her sister Marlene (Schweid), and her brother Jack Mandel — in Winnipeg's north end. Alex established a business in the west end in which both he and Lil worked together. When they sold the successful business, Lil went to work for Eatons in the lingerie department, a job she loved and held for several years. They were an easy-going, soft-spoken, lovely couple who worked hard and loved their family. Lil passed away tragically due to a medical mishap on August 2, 1989 at the age of 73. Alex passed away on May 9, 1991 from a broken heart over the death of his beloved Lily.

Mickey was born in Chicago in 1942 to Annette (Protus) and Fred Simkin. Just three years later, Fred was killed in active duty while fighting in Germany with the U.S. army. Annette then was invited to come to Winnipeg with her young son to visit her husband's Simkin relatives and during that visit, she met Max Rosenberg. She returned to Winnipeg the following year to marry Max who raised Mickey as his own. Max and Annette had two daughters together — Sherri (Verdec) and Diane (Leblanc), both who currently reside in British Columbia.

Mickey grew up in Winnipeg's north end. His Simkin uncles were involved in residential construction and the Rosenberg family moved often, following the development of the areas. Mickey recalls his childhood being one of "new houses on gravel roads". His Mom was always a going force in the family and worked for many years in the payroll department of Investors Syndicate. She is still enjoying life at the Simkin Centre. Max was for many years in the Life Insurance Business and in his latter years was in sales for a large lighting manufacturer. He passed away in 1997. Mickey recalls with fond memories the many years he and his father along with two of his Rosenberg uncles, Harry and Mickey, would golf and curl together and each year would enter the Bnai Brith Curling Bonspiel.

Although Roslyn and Mickey both spent their childhood in the north end, they met for the first time only in their late teens. Roz attended Machray and St. John's Tech, and Mickey attended Peretz Shul, Edmund Partridge and West Kildonan Collegiate. In 1960, the Mandel family moved to Hartford Avenue and Mickey had a good friend who lived next door and that's how they met. After dating for a few years, Roslyn and Mickey were engaged on New Year's Eve 1964, and had a large, lovely wedding at the Rosh Pina Synagogue on August 15, 1965.

After their marriage, Roslyn continued to work with GMAC until their first child was born. She enjoyed her job where she was well respected and generously paid. She stayed home while raising their family all the while taking University courses. When their youngest was in Grade 6, she returned to the workforce and enjoyed 30 years with The Bay in Executive Offices and Human Resources, a job she loved and looked forward to every day.

Mickey had studied sciences at the University of Manitoba but by the end of his second year he knew he would rather have a career in law. While he attended law school he articled with his uncle Abe Simkin's law firm. He has never looked back and to this day thoroughly enjoys his career, specializing in property development, condominium law, and mortgage realization work for a major bank.

The Rosenbergs' dedication to consistent, hard work has been passed down to their family. Each of their three children graduated from Joseph Wolinsky Collegiate, each one has earned two university degrees, and each one is employed at a high level within their profession. Their children are Cheryl, Brian and Melanie.

Cheryl (1967) is a teacher and Consultant of Student Services for a school division. She is married to Sean Smith, a Chartered Accountant. They have two children, Alexa (1997), a law student, and Ryan (2000), who is attending the Asper School of Business. Brian (1969) has a degree in (Honors) computer science and works as head of IT for a major company. He is married to Sari Slayen, a Vice-Principal. They have a son, Jordan (2005), a good student with a passion for sports. Melanie (1973) earned her MBA at the University of Minnesota and was recruited to New York. She currently serves as HR Director for an International Company. She is married to David Riker, the CEO of a large U.S. Company. They live in Connecticut and have two children, Aiden (2006), a personable young man with a great sense of humour, and Elle (2009), a young lady with energy to burn!

Mickey and Roslyn enjoy their children and grandchildren and pursue every opportunity to spend time together. They maintain the tradition of Friday night dinners in their home. They enjoy vacationing together as a family — taking cruises and spending time in their new holiday home in Florida. Above all, they are proud of the people their children have become, and that they are passing on the value of hard work and dedication. They have learned that this is the path — yes, to success — but more importantly, to contentment. This is their wish for future generations of their family.