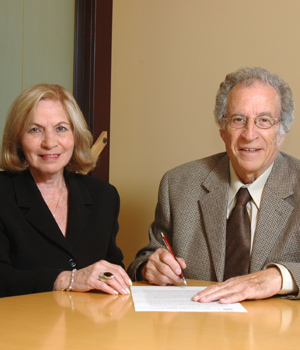 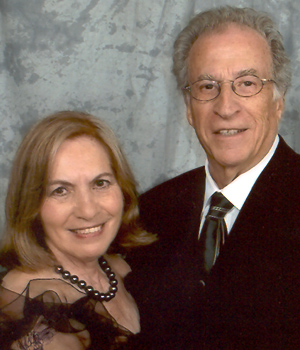 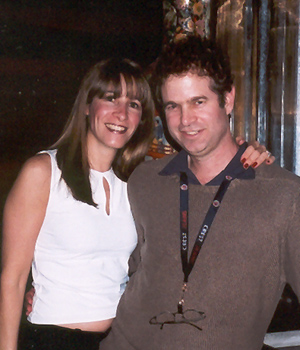 The Shells' daughter Marla and her husband Avi 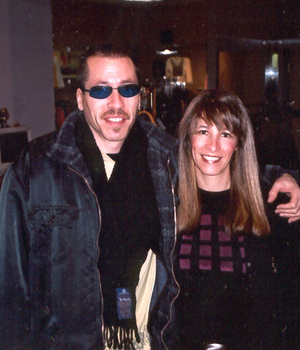 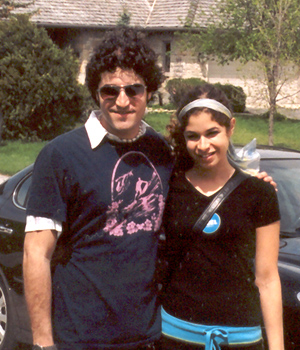 The Shells' grandchildren, Andrew and Emily

Eddie and I celebrated our 50th wedding anniversary on May 2, 2004. We felt that this was the opportune time to participate in the Endowment Book of Life program. As Jews, we believe that we must make every effort to support the Jewish community.

In 1904, when my father, Charles Altman, was two-years-old, he immigrated to Canada from Liverpool, England, with his parents, Israel and Liba Altman, brother Sam, and sisters, Leah and Jennie. The family settled in Zonnenfeld Colony, Saskatchewan, on land that the Government of Canada offered to new immigrants.

My mother, Fannie Bassin, immigrated to Zonnenfeld in 1918 from Poltava, Russia, with her brother, Mel, and sister, Clara. Mom lived with cousins, Rose & Mayer Hoffers, in Hoffer, Saskatchewan. Mel and Clara lived with Aunt Sonya and Uncle Mendel Peikoff in Rossburn, until Mel and his wife Molly purchased a store in Saskatchewan. Baba Chasia Bassin immigrated to Winnipeg from Russia around 1919 with her daughters Molly and Sonya. Eventually, Chania bought a store on Boyd Avenue with Uncle Mel making all the arrangements.

My parents were married in Zonnenfeld Colony in 1926, where dad farmed with his father. My brother, Harold Chaim, was born in 1928. My twin sister Clair and I were born in 1932. Sadly, Clair passed away in Toronto in June 2003. When Clair and I were a year old, our family moved to Winnipeg and operated a butcher shop and grocery store on McGregor Street. Harold, Clair and I became ardent members of Young Judea and enjoyed summer camps as campers, counselors and supervisors. Our 'head honcho' was Jack Silverberg, the brilliant math teacher at St. John's Tec.

My school years were great. I attended Aberdeen School, where I was on the honour roll every year, St. John's Tec, and the University of Manitoba. When I was asked to be the Grade Nine valedictorian, I declined due to stage fright. Today I would graciously accept the honour, as I no longer worry about speaking to an audience, thank G-d.

At the U of M, I took pre-requisite courses for two years, and then attended the Faculty of X-Ray and Radiology at the Hospital for Sick Children in Toronto, graduating with very good marks. When Clair married Syd Jacobson on February 8, 1953, I came back to town for the wedding, and met Eddie Shell. We fell in love and I decided to move back to Winnipeg so we could be together. Eddie and I were married on May 2, 1954.

Eddie's father, Max Shell, emigrated from Kiev in the early 1900's. Eddie's mother, Bessie (Klasser) Shell, arrived from Odessa in 1918. Eddie was born in 1926 in Leduc, Alberta, where his parents had moved with his sister Evelyn to operate a general store.

Unfortunately, Max became ill with Parkinson's disease and the family had to return to Winnipeg. Eventually Max's deteriorating health caused him to move into the Sharon Home, where he died in 1949. As a result, Eddie developed a very close bond with Evelyn, and later with her husband Ben Rayman, and children and grandchildren, Marty and Lori Rayman, Karla and Dr. Eugene Marks, Kerry and Rob Chetner, Maxwell and Lola, Lana and Doug Pulver, and Benny and Chloe.

In 1944, at the age of eighteen, Eddie interrupted his education and joined the army. He was sent to Lethbridge, Alberta to guard German prisoners. Upon his return to Winnipeg after the war, Eddie fulfilled his greatest dream by getting involved with construction, development and real estate, and making these his lifetime work. He began by delving into raw land and house lots, and building walk-up apartment blocks. He then established Sargent Construction.

Sargent Construction left its mark in Winnipeg and many other cities. The company was responsible for many commercial buildings, including the University of Manitoba swimming pool, schools, warehouses, libraries, bowling alleys and strip malls. It was the first company in Winnipeg to use cranes and flying forms for high-rise buildings. Eddie is particularly proud to have built the Courts of St. James, which was a project ahead of its time, as well as a concrete prototype house, the Towers of Polo Park and the Tawanie Towers, the first high-rise condominium in Winnipeg.

In the early years of our marriage, while Eddie worked I stayed at home with our children, Marla Melinda, born on February 22, 1955, and Alan Ira, born on November 21, 1959. Marla graduated from Peretz School, obtained her Bachelor of Arts and Sciences degrees from the University of Manitoba, and then graduated from the Faculty of Dental Hygiene. She married Avrum Kaplan on May 19, 1978, and they have two children, Andrew and Emily. Since 1984, Marla and Avi have successfully owned and operated the local clothing store, Village Streetwear. They are also fitness buffs.

Alan also attended Peretz School and graduated from the U of M with a B.A. and B.Sc. Afterwards, he graduated from the Faculty of Chiropractic in Toronto. Alan is also a musician and has studied music in Cuba with some of the finest musicians in the world.

Our grandson, Andrew, is 23 years old. He graduated from Joseph Wolinsky Collegiate and went on to acquire a Bachelor of Arts majoring in English, and a Bachelor of Commerce from the U of M. He is planning to enter the Faculty of Education. Andrew is a gifted musician who sings, plays guitar and piano, and writes his own music. He is also a talented artist. Andrew enjoys working with seniors as well as children, and is the Director of B'nai Brith Camp in Wisconsin Dells in the US.

Our granddaughter, Emily, is 20 years old. She also graduated from Joseph Wolinsky Collegiate. She is enrolled at the U of M, in Arts and Sciences, and hopes to become a lawyer. Emily is a no-nonsense girl who is kind, intelligent and has many friends. She is a terrific athlete, is into fitness, and loves to dance, sing, and play the piano and guitar.

When Marla and Alan were older, I began to work with Eddie at his new business, Caithness Properties. Working there was very interesting and educational, and despite the demands and difficulties of the work, I enjoyed it. I felt a great sense of accomplishment in assisting in the construction of many commercial buildings.

Eddie and I have lived a traditional life. We hope that our children and grandchildren will follow in our footsteps and do their utmost to preserve Judaism and support Israel. Eddie feels very fortunate to live in Canada, a democratic country in which a person with confidence, aggressiveness and the desire to work hard can become a great success.

Eddie and I both appreciate how wonderful our life has been. We hope to enjoy many happy and healthy years together.