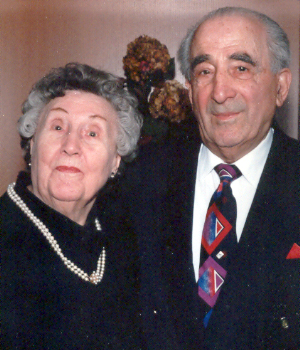 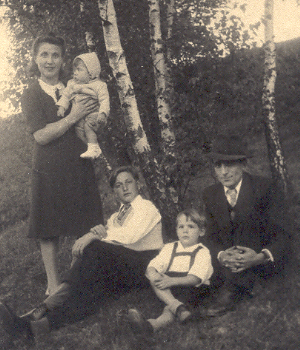 Rose and Abe with sons Norman, Phillip and Leonard 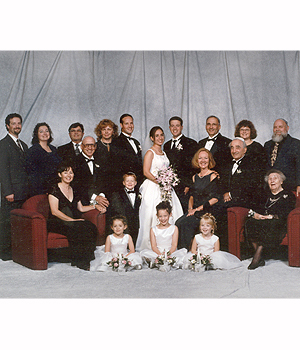 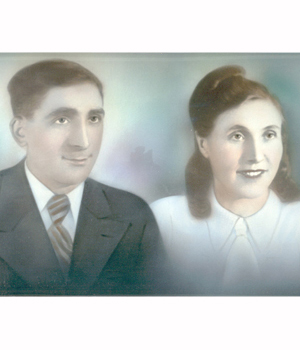 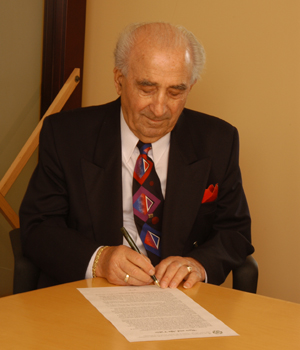 As I begin to reflect upon my life in Canada I feel a sense of accomplishment. Winnipeg has been good to my family and me. My reason for participating in the Endowment Book of Life is so that my great grandchildren would have a written record of their family's roots. I also feel that this is my way of giving back to the community that welcomed us in 1948. My late wife Rose would agree that this is the right thing to do.

My life began in Lithuania where I was one of four children, two boys and two girls born to Leib and Rashel Yakirovitch. My mother died when I was one and my father re-married. I had a number of step and half siblings. All of my biological siblings left Eastern Europe prior to World War II. Palestine was home to all of them until my brother moved to the United States. Like my siblings I too wished to go to Palestine and prepared for this by participating in the Achshera program, which trained Jewish youth for life on the Kibbutz. My father was a Kosher butcher and our entire family practiced a traditional form of Judaism. We lived a quiet and reasonably comfortable life. Jews in the 1930's were well tolerated in Lithuania and enjoyed equal status with the rest of the population. All Lithuanians had to serve in the army and, in 1939, during my tour of duty I accidentally crossed over into Russian territory. Because of the Russian-German pact Lithuanians were now suspect and I was therefore incarcerated at a camp in Komo, SSR. After my release I met and married Rose. We were not lucky enough to be together very long because I was again arrested in 1943. This second arrest was due to several factors including the fact that I had siblings in Palestine and I also associated with the Free Poles. I was again imprisoned. Utilizing my tailoring skills, I operated a tailoring shop for the prison camp until I was released. It was during this time that my son Philip was born.

The war cost both of our families dearly. We had lost many of our family members in the Holocaust. In 1946, in spite of the fact that Rose had a senior position in the government as an accountant of two military hospitals we knew that the family fortunes were better off out of Russian control. We decided to leave Russia. Rose and I fought to receive the proper documents so that our family, which then consisted of Rose and me, a son Norman from Rose's first marriage and our son, Philip, would be allowed to leave Russia. Traveling first through Poland, where we made our living bartering goods, we eventually arrived in Germany where I began to teach sewing skills to Holocaust survivors in an ORT school located at the Strand Hotel in Prin Am Kimzah. It was here that I met Mrs. Shapiro who was an UNRA representative. She promised to make arrangements for my complete family to remain united. By this time our youngest son Leonard was born. When the chance arose for the Yakir family to come to Winnipeg we said yes, arriving in 1948 to a welcoming community. There, I went to work at Sterling Cloak the very next day.

Always being entrepreneurial and with the support and assistance of my wife Rose we later began to do sewing in our own home. This led to the purchase of a few sewing machines, which eventually led to the establishment of Florida Sportswear, our own business. It was this business to which we devoted the bulk of our working lives.

Our lives, however, were much more than our business. Rose was an active and tireless worker for Israel. As a founding member of Hanita Chapter of Na'Amat, and a strong supporter of Jewish emigration from the Soviet Union, Rose passionately worked so that others would be given the same opportunities that we were in a free country. I, too, was involved in the Jewish community through the Brandeis Lodge and the Menorah Lodge of the Masons. Rose and I were strong supporters of Yiddish language and culture and were active in the Yiddish speaking Leivik Chapter of B'Nai Brith as well as other Yiddish-speaking groups. Rose wrote and presented her Yiddish poems at group sessions. Some of her poems were printed in the Jewish Post.

Our eldest son Philip became an educator while Leonard is a photographer in New York. I have been blessed with six grandchildren, two each from Philip, Leonard and the late Norman, and presently three great grandchildren.

After sixty-one years of marriage, Rose passed away. As I reflect on what our life together was all about I hear the word "strength" being repeated. Physical, emotional and moral strength have always been the guidelines that Rose and I used to direct all the aspects of our lives. I know that Rose would approve of the "strength of character" shown as I sign on our behalf the Endowment Book of Life. By doing so, the Yakir family is doing its share in giving back to a community that welcomed us when we had nothing.