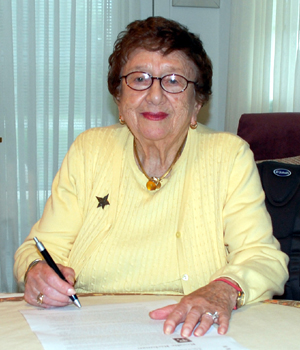 Rosalie Richman signs her story for the Endowment Book of Life 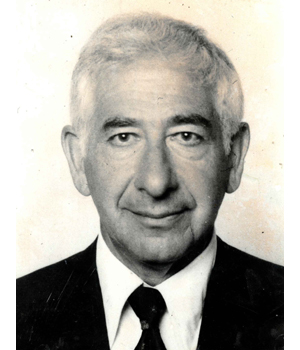 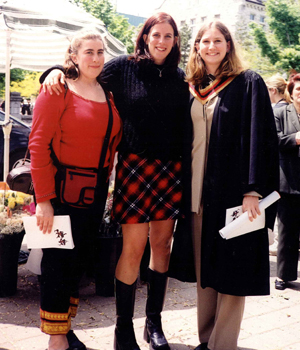 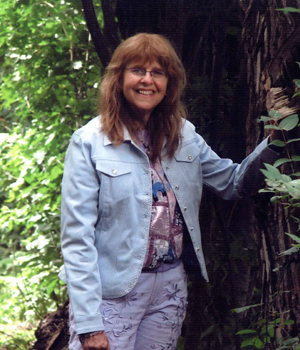 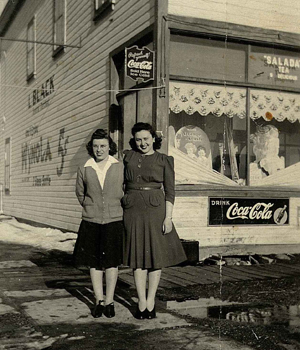 Rosalie Richman was born on March 18, 1916 in Winnipeg, Manitoba. She had five siblings, Cecilia, Edith, Samuel, Marion and Harold.

Rosalie's father, David Black was born near Odessa, Ukraine on February 15, 1882 and immigrated to Canada via New York. He had four brothers: Chaim, Velvel (Wolf), Max and Gerson. David worked as a storekeeper and Rosalie recalls him being busy all the time running the family business. "My father was a very ethical and honest man. He said a person's word is just like a handshake or signing an agreement - honesty is the best policy."

Rosalie's mother, Lottie (Zlotta) Black was born in Krutya Pedali, Russia in 1882 and immigrated to Canada in 1908 via London, England. She worked as a seamstress and helped her sister with her three children. She was a member of the Women's Institute as well as Hadassah. "She always cooked such delicious meals, Rosalie fondly recalls. On most Sunday's during the summer our home was a Mecca for our cousins to come for a good meal." Zlotta - a real balabusta in the kitchen - was known for her verenikas, kreplach and knishes. Rosalie can still remember her mother stretching dough by hand to make delicious strudels, chocolate cakes and pies.

Zlotta was a very strong, clever and intelligent woman. When her husband died, in 1932, she became the anchor of the family. "She not only worked at the store, but also had to find time to take care of her children and do the housework," says Rosalie. A shrewd business woman, Zlotta would always deal with the top managers of the wholesale companies, who had much respect for her and her business ethic. Zlotta made sure to give Rosalie prudent advice growing up. "I remember my mother telling me if you have to bow down to people, make sure you bow down to their head, not their feet," says Richman.

Rosalie met Alfred (Alfie) Richman in 1949 at the Blacks' family General Store in Brunkild, Manitoba. Rosalie was picking bananas that hung from the ceiling and Alfie - a true gentleman — saw her in the store and phoned her brother-in-law to get permission to take her out on a date. The two quickly became inseparable and would try to spend as much time together as possible. After spending so much time together, Rosalie felt as though she had known Alfie forever. "He asked me to marry him and I happily accepted," she recalls. Rosalie imagined a long engagement, but Alfie had other plans in mind. She remembers him telling her that, "You can't put off happiness; you have to grab it while you can." Six months later, on March 26, 1950, they got married at the Shaarey Zedek Synagogue and moved to Winnipeg.

Alfie was a widower with a daughter, Ruthie, who was two at the time. Although they never had any children together, Rosalie quickly stepped into the role of mother and raised Ruthie as if she were her own child.

Alfred Richman, was born on July 15, 1919 in Winnipeg. He was a glove designer and manufacturer who had a successful business in Winnipeg. When he sold the business he became a consultant and went on to be involved in many organizations including sitting on the Boards of the Winnipeg Art Gallery, the Institute of the Blind, the Winnipeg Public Library, the Shaarey Zedek Synagogue cemetery and was one of the founding board members of the Jewish Foundation of Manitoba.

Rosalie and Alfie didn't focus on the material things in life - rather, they enjoyed travelling around the world, visiting and experiencing as many countries as they could. Alfie was also a talented artist known for his lifelike paintings of individuals and landscapes. Sadly, he passed away on September 25, 1989 from stomach cancer. Ruthie followed in their footsteps and is an artist herself - designing and creating beautiful quilts and knitwear that she promotes at conventions and in magazines throughout the country.

Rosalie grew up in Oberon and Brunkild, Manitoba where she attended Brunkild Consolidated School from elementary to grade 11. She participated in many extra-curricular activities including sports and music lessons. Rosalie also liked to attend and participate in plays and concerts that the school put on throughout the year.

Rosalie kept herself busy with her many hobbies including sewing, sculpting, art, stone carving, knitting, bowling, curling, baseball and golf. She takes great pride in her knitted doll collection that she has created over the years.

Besides her hobbies, Rosalie volunteered her time and energy wherever she could — particularly serving as President of the Brandeis chapter of Hadassah and Chairman of Membership for Hadassah-Wizo. She played a key role in increasing membership numbers by coordinating many successful events for the organization. She was also involved with the National Council of Women and is a member of the Red Hat Society as well as the Glendale Country Club. She also raised money for children's rehabilitation services by knitting dolls. Rosalie was also a dedicated volunteer at the Misericordia Hospital gift shop alongside her sister Edith, where she devoted close to 2000 volunteer hours.

Rosalie would like to be remembered as always being there for her family. "I always lived my life caring more about others than myself and making others happy," she says. "I wish my family all the health and happiness and to be free from all evil."

Her greatest wish is to leave a lasting legacy for the next generation of Winnipeg's Jewish community, which includes her three grandchildren, Tamara, Rebecca and Simcha Snell.

Looking back on her life, Rosalie has no regrets. "I learned everything I know from the school of hard knocks — I'm self educated," she says. "I truly believe in the philosophy of B'sheret is B'sheret...live your life to the fullest and don't worry about everything, your fate is sealed."