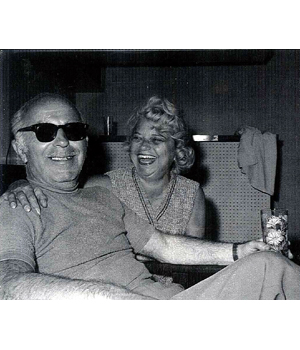 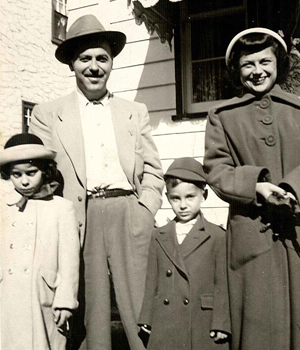 Rosalie and Lou with children Audrey (L) and Chuck (R) 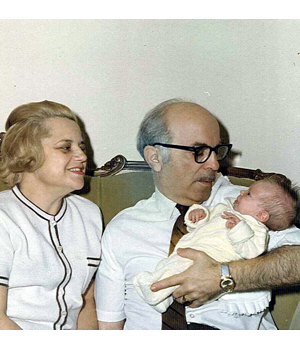 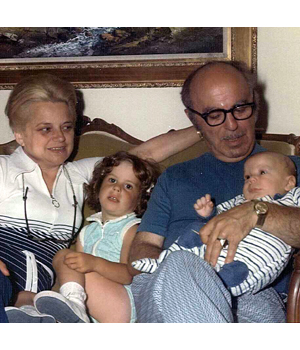 Rosalie and Lou with Mara and Warren Zimmerman 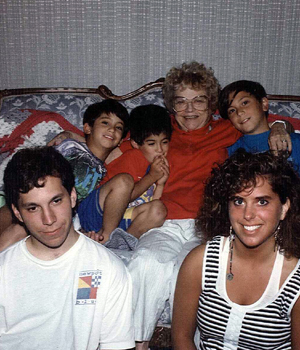 Our mother, Rosalie, was born to Adella (Winestock) and Harry Diamond on October 2, 1918. The Diamonds owned a general store in Arborg, Manitoba. Our grandfather Harry was also the Reeve of the municipality and had a movie business where he would take a movie from theatre to theatre in various towns in the Interlake. Our grandmother Adella was a very creative woman who loved to act in the Yiddish theatre. Our mother had two sisters and a brother — Claire Blankstein (Cecil), Gert Ludwick (Rube) and Morris (Mildred) Diamond. For a time they had a home both in Arborg and at 267 Manitoba Avenue in Winnipeg. Most of our mother's youth was spent in the home in Winnipeg.

Our father, Louis, was born ("Laiba") to Masha (Cohen) and Samuel Boroditsky on January 1, 1916 in Winnipeg. Samuel had arrived from Propoisk, Russia in 1912 and soon after founded Bell Bottling Company, makers of soft drinks like Wynola, 2-Way, Suncrest and Jersey Cream. When Louis was a toddler, the family moved to Dauphin and opened a plant there. Our aunt Sara ("Sorke") was born in Dauphin in 1921. (She later married Max Saper.) A few years later (1922-23) the family moved back to Winnipeg.

Our grandparents Samuel and Masha were very active in Jewish community life. They were affiliated with the Lubavitcher Synagogue since its inception in 1917, and later were active with the Rosh Pina Synagogue. Along with numerous other organizations, Samuel was involved with the establishment of Jewish Child and Family Service, President of the Propoisker Society, a Board member of the Jewish Old Folks Home, and President of the Jewish Orphanage of Western Canada. Later in life, together with his brother, he supported an orphanage in Israel. Grandmother Masha kept an observant home and was always ready to set another place at the table in their warm home on St. Cross Street where they lived from 1939 until they passed away.

Our parents met as young people in Winnipeg and married in 1939. Our father was in the Canadian Army Reserves during the war. He attended university and got his Bachelor of Science degree but could not get into medical school due to the Jewish quota, so he spent most of his working career in the family business, Bell Bottling, managing the plants in both Brandon and Dauphin. While both of us were born in Winnipeg, Audrey was born during the time our parents lived in Dauphin, and Chuck was born while they lived in Brandon.

Our father worked hard and was active in the community. He served as President of the Chamber of Commerce, and President and District Governor of Lions Club District 5M3. He was active with the CNIB and he was instrumental in founding the Lions Eye Bank of Manitoba as well as the Lions Club Bingo. He was very bright, and generous with others. He maintained an active interest in sports and enjoyed coaching a Little League baseball team, sponsored by Bell Bottling. He was active with the B'nai Israel Synagogue in Brandon, although our family usually travelled to Winnipeg for High Holidays and attended the Lubavitcher synagogue. In 1960 he left Bell Bottling and returned to Dauphin where they established and operated an A&W until 1976. Sadly, he suffered a heart attack at the age of 40 which affected his lifestyle, and his quality of life. He passed away at the young age of 62, on August 21, 1978. The Lions Club of Brandon named the "Lion Louis Boroditsky Ball Park" in his memory.

Our mother was soft spoken, patient and kind. She had a wonderful sense of humour. She kept a kosher home and loved her family - which included a large extended family. She was involved with the Lionelles (wives of the Lions), but her first love was dance! She had taken dancing lessons as a child - at the age of 10 she would take her friends home and would teach them what she had learned for 10 cents a lesson! At the age of 16 she and her friend Norma Jampel Parks began to teach together and they were accompanied on the piano by Norma's future husband — Mitch Parks. When she moved to Brandon in 1945, she resumed her love for teaching dance. She taught dancing lessons in our home and established what would later become the Brandon School of Dance. She taught dancing for many years to many hundreds of students in Brandon and surrounding area. Her annual recitals became well-received and well attended events. After our father died, Mom moved to Winnipeg and lived with Audrey and Ron. It was a joy to have her with us. She passed away on March 29, 1992.

Both Rosalie and Louis came from large close-knit families. The Winestocks, Boroditsky's and Cohens had Cousins Clubs and remain close to this day.

The Endowment Book of Life gives us the opportunity to share the story of Louis and Rosalie Boroditsky - our parents, grandparents and great-grandparents. It is important to us that the Jewish Heritage Centre of Western Canada remain strong and retain the histories of those who helped build and shape their communities and therefore the Boroditsky legacy will also include a gift to the Jewish Heritage Centre Endowment Fund at the Jewish Foundation of Manitoba.

May their memories be for a blessing.