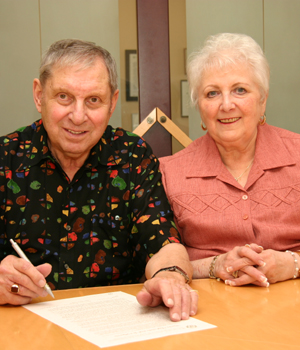 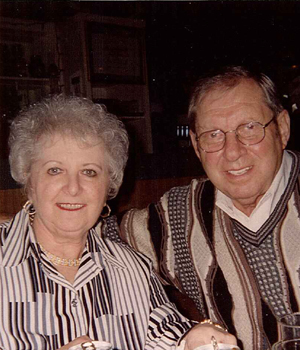 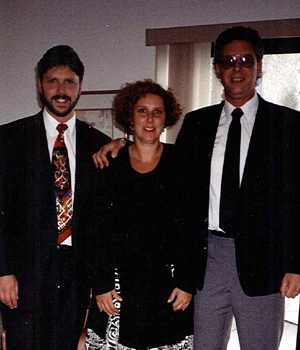 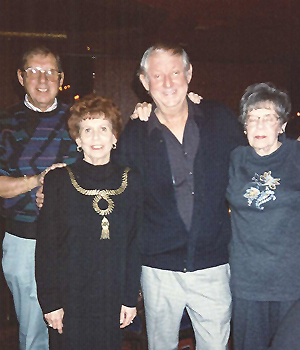 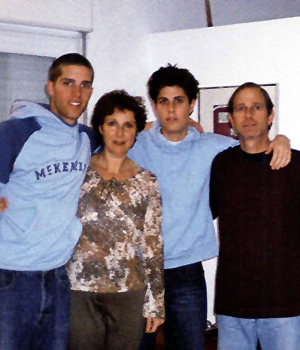 Considering how deep Ronnie and Irv Morris' prairie roots go, it is not surprising to learn that that they are extremely fond of Winnipeg and its Jewish community.

Ronee (Rona Rae Ludwick) is a third generation Canadian on her mother's side. Her mother's father, Leo Davis, was born in Montreal and her mother's mother, Rae Boim, was born in Russia. Her paternal grandparents, Isaac and Rose Ludwick, were Russian immigrants who arrived in Winnipeg at the turn of the century. Both of Ronee's parents, Ernie and Irene (Davis), were born in Winnipeg. Ernie was the owner of Exchange Realty, a real estate and insurance company, and an easy going and fair man. His wife was very beautiful and very outspoken.

Ronee was born in 1933 and grew up with her brother Gerry, first on St. John's Avenue and then Cathedral in the north end. Today Gerry resides in Palm Springs. They moved to Queenston Street in River Heights when Ronee was a teenager, although Ronee continued to socialize mostly with north end friends. She attended the Folk Shule, and Champlain, Machray, Robert H. Smith and Kelvin schools; and was a member of the Y where she enjoyed the teen canteen dances. She was in the first class to be confirmed at the Shaarey Zedek Synagogue, and also sang in its choir.

Following high school graduation, Ronee enrolled in technical school, and found work as a children's shoes salesperson at Raynard's and in the credit department at Morley's. She met Irv during this time on a blind date arranged by her cousin. Ronee and Irv married in 1953 at the first ever Saturday evening wedding at the Shaarey Zedek, where they have been members now for more than 40 years.

Ronee and Irv have three children: Larry, who teaches English in China and has three children of his own; Nancy who lives in Jerusalem with her husband and two sons; and Jeff who lives in Toronto and also has two children. While Ronee was a stay at home mother for many years, she also worked in the office of the Combined Jewish Appeal/Women's Division and in Winnipeg's first ORT office. She left work to care for her ailing mother, who lived in both Winnipeg and in Palm Springs.

Following her mother's example, Ronee and Irv also now live a few months of the year in Palm Springs, traveling there in the winter to escape the Winnipeg cold. Additionally, they have often visited their daughter in Israel, and Irv travels regularly to Halifax to check up on the business that he co-owns with his son, Jeffrey. Irv first became involved in sales and entrepreneurial pursuits as a young man when his father, Louis, a traveling salesman, passed away in 1950.

Louis had arrived in Canada from England with his siblings in 1917. He initially worked in the hardware business, then moved to Estevan, Saskatchewan where he owned a furniture store and was involved in the grain trade, before going into sales. Irv's mother, Ethel (Prosterman), was born in the Ukraine, arriving in Canada with her parents in 1898. They were one of the first Jewish families to settle in Regina.

Louis and Ethel were married in Regina in 1918. Irv was born in 1926, and spent the first several years of his life in Estevan with his three sisters and brother — Sybil, Lil, Sally and Murray. In 1934 the family moved to Regina to seek medical treatment for Sybil. Although she passed away, the family remained in the big city. Louis became very involved in the Jewish community, serving as its president and as a co-founder of the synagogue, much to the delight of his orthodox wife. Irv had a Bar Mitzvah and as a strong Zionist was involved in Young Judea, sitting on its executive and working as a counselor at its camp. After high school he studied for a year at Regina College, was conscripted and received a deferment until school was finished. By then the war was over.

When Louis passed away, Irv took over his lines for one year and then began working in a Regina men's wear store. When his mother moved to Winnipeg with his younger siblings, Irv followed. He had a series of jobs, all in the clothing sector, before becoming the manager of a store in Kamsack, Saskatchewan for ten years. Both Irv and Ronee have very fond memories of the time they spent there. The Jewish community was vibrant, as Jews from all the surroundings areas came there for the high holidays and other celebrations, and they enjoyed many good times.

At the urging of Ronee's father, Irv and Ronee moved back to Winnipeg, and Irv began working for his father-in-law. Eventually he established a successful coin vending business. He sold it in 1984 and went into retirement for two years before joining Jeffrey in another vending machine business. Irv now works from home most mornings, and with Ronee, continues to enjoy the company of many good friends. They are both proud to be able to give back to their city and to the community through the Endowment Book of Life program.