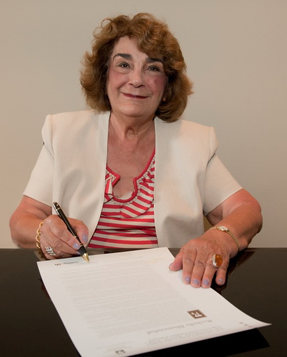 Rochelle Blumenthal signs her story for the Endowment Book of Life 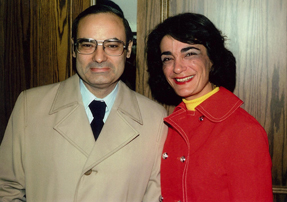 Rochelle and Sidney in 1977 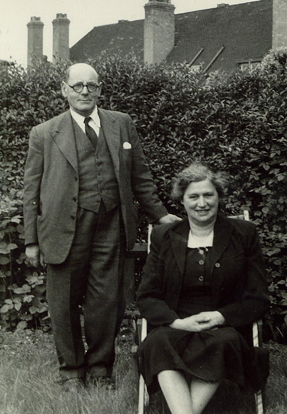 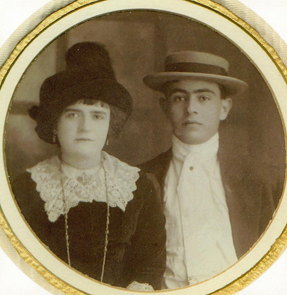 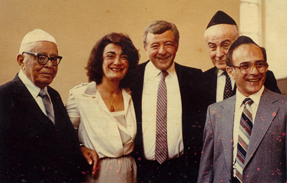 My brothers Harold, Bernard, Wilfred and my father Abe Schwartz 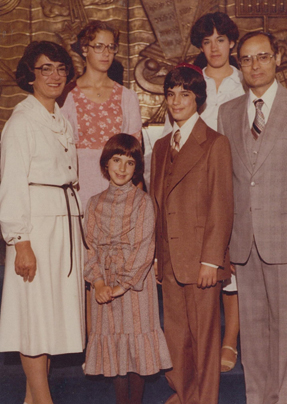 Rochelle Blumenthal was born on July 4, 1935 in Winnipeg, Manitoba, the daughter of Abe and Sophie Schwartz. She is the youngest of five siblings with brothers Harold, Wilfred and Bernard and one beloved sister, Ethel z"l.

Rochelle's father, Abe Schwartz, was born in 1890 near the Black Sea in Moldavia. In 1906, at the height of a wave of Pogroms, he immigrated to Canada with his parents (Shalom and Rachel Schwartz (nee Resnick) ). "Shalom's original last name "Matevoczan" was changed to "Schwartz" at the border because his skin was so dark," says Blumenthal. It was a long and difficult process as Shalom had to work for a year in the coal mines in Wales before his family could get into Canada.

In the 1920s, Abe branched out as an entrepreneur and went into business with his brother-in-law, Norman Cristall. They operated a grain elevator in Brandon, Manitoba, until an accidental fire forced them to shut down. Abe tried his hand at several more business ventures, but with the subsequent economic crisis of 1929, any hopes of success went up in smoke and by 1934, the rest of his businesses suffered the same fate as his grain elevator.

In order to support his family during this difficult time, Abe decided to go into the insurance business and, in-turn, became a highly successful insurance salesman — even reaching the ranks of the "million-dollar round table".

As an active member of the community, Abe volunteered for the Jewish Child and Family Service and the Jewish Federation of Winnipeg and was honored at the yearly Negev dinner for his work in the community. "I'm very proud of my father," says Rochelle. "He was uneducated when he came to Canada, and taught himself how to read and write in English."

Rochelle's mother, Sophie Schwartz (nee Cristall) was born in 1895, near the Black Sea in Moldavia, and immigrated to Canada in 1906 with her mother and three brothers. Like most women at the time, Sophie was a full-time homemaker who took pride in her home and raising her five children. "She made a beautiful home," says Rochelle with a smile. "My parents loved beautiful things and our house was always filled with beautiful objects. We always had food on the table, and she made me meals that were out-of-this-world!"

An active member of Hadassah, Sophie had a talent for knitting and sewing — services that she happily volunteered. "I can recall my mother sitting at the sewing machine making countless aprons for Hadassah," says Rochelle.

Rochelle attended Glennelm Elementary School, Machray Junior High and St. John's Tech for high school. "Those were very happy years for me," says Rochelle. "I had many friends and we would go together to the Y on Albert Street and have a great time."

She studied at the University of Manitoba, during which time she was active in Hillel, and graduated with a Bachelor of Arts degree. "My university years were the best times of my life," says Rochelle. "I had a very active social life, I loved to learn new things, be part of sororities and just the environment as a whole."

Rochelle met her husband, Sydney Blumenthal, in 1959 after a physician friend asked if she wanted to go out with a British doctor. She agreed and they went to a movie together. "I didn't know if I'd like him at first," says Rochelle. "He had an English accent, which I found strange at the time, but when he took me in his arms, I knew he was the one for me."

On June 7, 1960, Rochelle and Sydney were married at the Shaarey Zedek Synagogue. They shared a beautiful and cozy three-story home on 105 Ash Street, together for 18 years. Rochelle continued to live in her home for an additional seven years after Sydney's passing.

Sydney Blumenthal was born on May 26, 1930 in Birmingham, England. He came to Canada in 1957 because a doctor was needed in Swift Current, Saskatchewan (situated between Moose Jaw, Saskatchewan and Medicine Hat, Alberta). With names like that, Sydney was compelled to come out there to see it for himself. He worked as a Physician of Internal Medicine and served as Chairman of the Ramah School Board. Tragically, Sydney passed away from Leukemia, in 1978, at the height of his career. "I looked up to my husband and he was my hero," says Rochelle. "His values have guided me throughout my life."

Sydney's father, Abe Oswang, changed his last name to Blumenthal in America before coming to England. He met and subsequently married Becky Glass, who came from a very established Jewish family in Birmingham (the Oswang family is originally from Lithuania with the majority now living in Israel).

After her husband's passing, Rochelle became a single mother who dedicated her life to providing the best for her children. "My greatest single achievement has been to raise four very successful children on my own," says Rochelle.

"I'm very involved with my children and grandchildren," says Rochelle. "I try to have them over as often as possible for Friday night dinners."

Aside from her hobbies, Rochelle volunteers her time and energy to causes that are near and dear to her. Specifically, sitting on the Board of the Friends of the Winnipeg Public Library - initially as the Chair and currently as the Vice-President. She was also involved with the National Council of Jewish Women (NCJW). "NCJW really made an impact on me and taught me a great deal about volunteerism, education and cultural action," says Rochelle.

Today, Rochelle continues to stay active by keeping her body and mind fit, whether it's signing up for activities at the Rady Jewish Community Centre or attending a weekly 55+ program at the University of Winnipeg. This life-long scholar also boasts a Diploma in Library Technology from Red River College and is a graduate from the Florence Melton program in Jewish Studies at the Rady JCC.

Rochelle was motivated to sign the Endowment Book of Life because she wanted her life story to be available to her children and grandchildren as a lasting memory. "I want to be remembered as a loving, caring and honest person," says Rochelle. "I want my family to be safe, healthy and continue to achieve greatness."

Rochelle hopes that by participating in the Endowment Book of Life at the Jewish Foundation of Manitoba, the Jewish community will continue to grow and prosper for future generations.