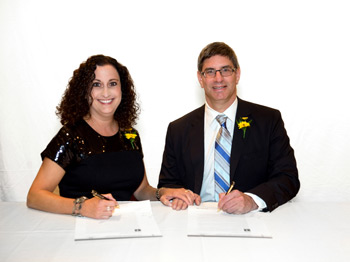 Rob Yusim signs his story for the Endowment Book of Life

My father and I were very close and when he passed away in 1977, I was devastated. I was not quite 14 years old and I was at a crossroads with a choice to make. I could choose to get lost in the sadness of his passing, or I could try and go in a positive direction in life. I chose not to allow the sadness to consume me and I hoped that my memory of the type of man he was would guide me in a positive direction. Losing my father at such a young age forced me to become more independent and resilient.

My father, Moe Yusim, was born in 1916 in Proskurov, Russia, to Sura and Alter Yusim. At a very young age, my father immigrated to Montreal and eventually became a furrier. On a Western Canadian business trip, he was set up on a blind date with Gertrude Thow in Winnipeg. He never left, and my parents were married in 1952. My mother, who goes by Trudy, was born in 1926 in Winnipeg to Max and Rose (née Korman) Thow. When she was very young they moved to Saskatchewan, where they had a store, but subsequently moved back to Winnipeg and ultimately settled in River Heights.

I grew up on Lanark Street, the youngest of four children. I was born in 1963, after Alan, Norman, and Susan. It was a wonderful place and time to grow up. In the summers, I remember getting up early and heading out with my friends. My mother would pack me a lunch and my friends and I would take off on our bikes to the park or the nearby Assiniboine Forest. We would play sports and games, catch tadpoles, and have a great time.

When I was young I played soccer and in school, ran track and played basketball. I went to Ramah Hebrew School and Grant Park High School. I have fond memories of family time before my father passed away. We used to spend lots of time in the summer at the Holiday Sun and Swim Club, which was like a resort in the city. While we weren't an overly observant family, it was very important for my parents that their kids have Jewish connections and a sense of Jewish identity. I was Bar Mitzvahed and attended High Holiday services at Shaarey Zedek. I went to Camp Massad for several summers, which I enjoyed very much.

As a teenager, I joined BBYO, became very active, and served on the regional board. It was a very positive, grounding, Jewish experience for me.

After graduating from high school, I went to the University of Manitoba where I earned my Bachelor of Arts and Bachelor of Commerce degrees. In university I also enjoyed getting involved in student government and developed a passion for entrepreneurship. I was involved in several summer business enterprises, including kiosks at the Red River Ex and at Eaton Place. While in Commerce I started a marketing company — Campus Communications — that sold advertising to national and local companies for campus calendars, discount cards, and coupon books that I created. Through these enterprises, I was able to pay my own way through university and I also won the U of M Commerce Student Entrepreneurship Award. I also was elected to the University of Manitoba Senate. The success of serving in the University Senate and my marketing venture cemented a positive direction for me and confirmed my instincts about the type of career I wanted to have.

The most important event of my university years was meeting Cindy Rosenberg in 1981. We were married in 1988 and are enjoying a beautiful life together. We have three wonderful children: Marlee (1992), Lauren (1994), and Adam (2000). We promote Jewish identity and values by keeping a kosher home, providing a Jewish education, and encouraging and modelling participation in the community. We enjoy our time together as a family, and have especially enjoyed our annual family vacations to Israel, Hawaii, and other places.

After Cindy and I got married, I was introduced to Ray Kives of K-Tel fame. I grew up fascinated with K-Tel's commercials and Ray offered me an opportunity: If I could successfully sell a licensing program, he would give me a job. Fortunately, the project succeeded and I worked with Ray and his company, Quality, for eight years. It was my greatest education as I was delegated responsibility for important consumer product launches and growing businesses in Europe and internationally.

That early success has led me to work with several companies and inventors around the world, helping them bring consumer products to market. I have launched hundreds of "As Seen On TV" advertising campaigns for many products in North America and internationally. I love what I do and am proud of what I have achieved so far.

I am also proud of my volunteer work in our community. It is important for me to show my children that we have a responsibility to make our community a better place. Cindy and I were honoured to be among the first host families in Winnipeg when the community started to encourage immigration from Argentina (a brilliant initiative of which we should all be proud); and together, Cindy and I were Ambassadors for Folklorama's Israel Pavilion in 1999. I've also been active with the Rady JCC Board; the Asper Jewish Community Campus capital campaign; and the Combined Jewish Appeal annual campaign. I'm very proud of the Shem Tov Award I received for my work with the Rady JCC.

While Cindy and I are still young and look forward to many more wonderful events in our lives, we are excited to participate now in the Endowment Book of Life program. I hope our participation will set an example for others and that, as a community, we will be able to innovate and grow and ensure our long-term viability.